For the past few weeks, I’ve been going down a YouTube rabbit hole with videos of professional poker. They’re not terribly high quality videos (the constant clacking of poker chips is damn near insufferable), but I played enough poker (poorly) when I was younger to have an appreciation for the game and the mentality needed to play it well. Poker is a game of skill, but certain aspects come easier if you have the mindset of a gambler.

I bring it up because I thought of poker when I first heard about Gaming4Keeps, the new online portal that allows anyone to risk real money in a video game. Like many people, my initial thought was, “How is this legal?” Wagering on the outcome of a video game seems like the sort of thing that should be illegal, not because it’s inherently wrong or immoral but simply because it’s the kind of thing that watchdogs tend to frown upon. We’re constantly taught that gambling is a vice and we’ve come to expect a degree of regulation around such activities. 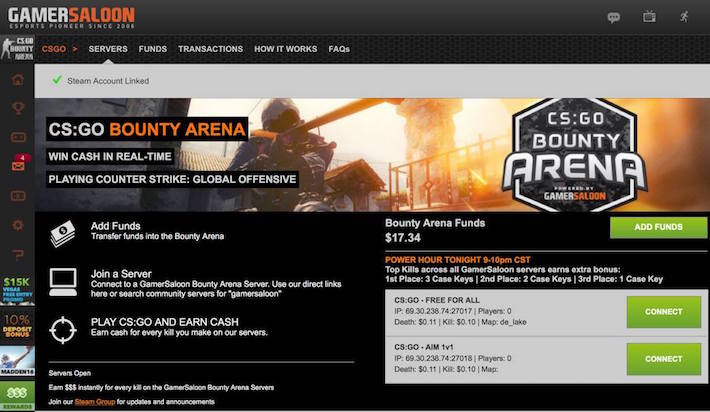 Yet after thinking about it for a few minutes, most of those objections start to vanish, especially when measured against other games (like poker) that involve betting. Though there are differences in skill level, most people don’t have an issue with the game itself as long as the playing field is equal.

That’s what makes Gaming4Keeps so intriguing. It creates a new way to play, one that could fundamentally alter the way audiences perceive professional gaming. Though it’s probably a grind (especially if you’re playing for a dollar at a time), Gaming4Keeps offers a path that could turn Counter Strike into a steady career for those willing to put in the long hours needed to succeed.

At the same time, it still feels like Gaming4Keeps is something that we need to talk about. The platform raises a host of ethical concerns, most of which the company thankfully seems to be aware of. Some of the people playing at Gamer Saloon are going to lack impulse control and are likely going to stake more money than they can afford to lose. If the doors stay open for any stretch of time, there are going to be horror stories about people losing their life savings in the same way that people have lost fortunes wagering on blackjack. There could (and likely will) be a dark side to the industry because greedy individuals gravitate towards any venue in which large sums of cash are up for grabs. People will do unscrupulous things to gain access to that money.

I’m just not sure that’s the venue’s fault, or if it’s enough to argue against the advent of a site like Gaming4Keeps. There are limits to what anyone can do to protect people from themselves, and I dislike the kind of Puritanical thinking that legislates against relatively harmless activities. I don’t have any issue with consenting adults making the conscious decision to spend their entertainment dollars on games of mixed skill and chance. Millions of people manage to visit casinos without going broke. In the case of Gaming4Keeps, I think most people will be able to play and enjoy the competition in a healthy manner.

That obviously changes if Gaming4Keeps proves vulnerable to hackers, and there are enormous technological and structural hurdles that need to be overcome. Players need to believe in the security of the software because the entire premise falls apart if the playing field becomes unbalanced. It’s too early to tell if the security measures put in place will be effective, but Gaming4Keeps is at least recognizes that trust needs to be a central selling point for the service.

If the technology does hold up, Gaming4Keeps could have a radical impact on the professional gaming landscape. In Las Vegas, there have always been high rollers willing to lose money just to say that they got to play poker with the pros. In fact, that kind of largesse is how many pros make their livings. There likely will be people willing to sacrifice a few dollars to lose to professionals in Counter Strike: Global Offensive, either because they think it will make them better players or just for the novelty of the experience.

If you’re an aspiring eSports professional, that has to be pretty enticing. Gaming4Keeps represents a reliable source of income between tournaments, one that is tied to industriousness rather than the corporate sponsorships that make up a traditional prize purse. It’d be like getting paid to practice, even if the level of competition isn’t quite as high as it would be in a bracket. Televised championships carry greater prestige and opportunities for celebrity, so I doubt Gaming4Keeps will usurp the premiere tournaments or the rise of spectator eSports. However, Gaming4Keeps has the potential to stabilize the field, making it easier for players to sustain themselves and likely increasing the number of players able to make a living playing video games.

That would make eSports a more legitimate career, at least in the sense that it becomes less speculative. The level of competition would rise as more players turn to competitive gaming as a viable option, and that in turn would in turn produce more marketable personalities and add entertainment value for rapidly growing audiences. If anything, the relationship between a site like Gaming4Keeps and traditional eSports should be symbiotic, even if the theory still needs to be tested in practice.

I don’t have all the answers, and I’ve probably overlooked some facet that will prove to be important. Gaming4Keeps simply seems like it should be a big deal, and I wanted to make sure that someone addressed the issues in public. I’ll be curious to see how Gaming4Keeps evolves as more people decide they’d like to pay for play in games that have traditionally been free, and even if Gaming4Keeps fails I’d expect imitators to move in to take its place. People are now able to legally wager on video games, so we’ll have to make peace with these questions sooner rather than later.