According to the packaging, Lego Dimensions is designed for children between the ages of 7 and 14, which is odd considering that so much of the material seems to be designated for adults. Most of the licensed properties are at least kid-friendly (I don’t know of anything terribly objectionable about Doctor Who), but I can’t imagine that Back to the Future has the same nostalgic pull on children that it does on the parents who were alive in the 80s.

However, some of the additions are more puzzling than others, none more so than Portal. I have absolutely no idea what Portal 2 is doing in Lego Dimensions, and it sort of makes me wonder who these games are made for in the first place.

Don’t get me wrong. I love Portal and I’m glad it is in Lego Dimensions. The Portal 2 stages are some of the best in the game primarily because Traveller’s Tales knew exactly what it was doing with GLaDOS. Her laser-guided, turret-based antipathy makes her one of the funniest characters to pair with random heroes (and villains) that are unprepared to deal with her fanatical devotion to science. 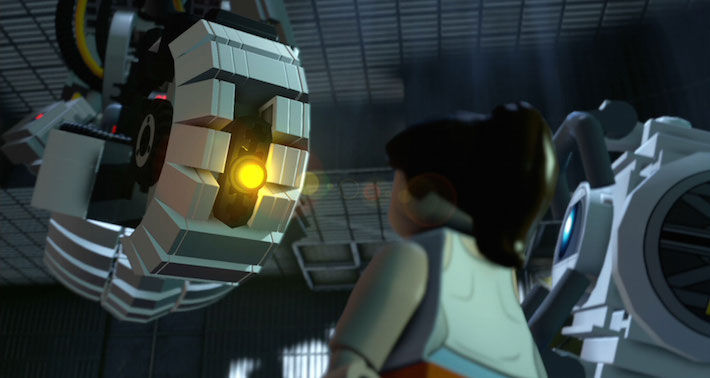 But those are purely selfish reasons predicated on adult nostalgia in children’s entertainment. Portal isn’t all that violent or profane, but it is a game about a rogue AI that murders human beings for sport. When you get right down to it, Portal is basically a bizarre nightmare scenario in which a delusional serial killer stalks a non-consenting woman through a torture maze. It’s one degree removed from Saw, albeit with cleaner presentation and a far more competent protagonist.

It’s also astonishingly bleak. Most works of popular fiction conclude with the triumph of good over evil, but Portal revels in the nihilistic impossibility of Chell’s situation. There’s no guarantee that you’ll ever be able to escape from the twisted confines of Aperture Labs. The game finds nobility in that perseverance, but the setting is essentially a prison and you have to keep going even when you know it might be futile. GLaDOS will never stop, and that’s what makes her scary.

All of which is to say that both thematically and tonally, Portal is not designed for children. The humor assumes a certain level of education and experience (it at least requires a basic understanding of ethics as applied to the scientific method), and while children may find some of GLaDOS’s more outlandish statements amusing (Lego Dimensions smartly emphasizes her deadpan absurdity rather than her cruelty), her truly sadistic capacity for malevolence will likely go unrecognized. 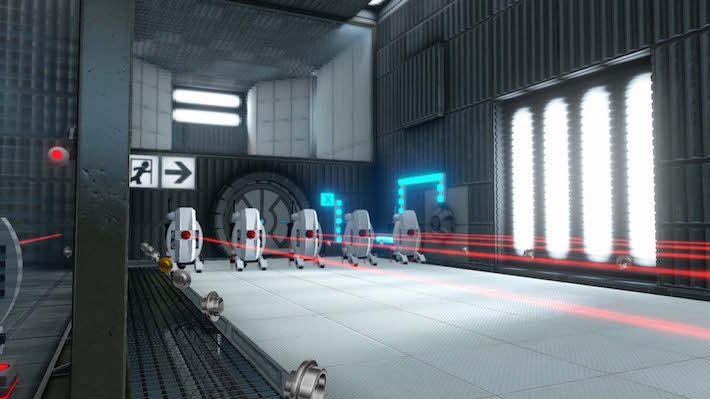 That’s the difference between Portal and more overtly violent Lego properties like The Lord of the Rings or Jurassic World, both of which fit within broad archetypes of good and evil. They’re thematically simple, splitting the world into heroes and villains with dinosaurs in the middle. PG-13 action movies are only slightly more intense versions of Disney movies and Saturday morning Justice League cartoons, and the sheer volume of toys would indicate that those audiences skew younger.

Meanwhile, the meta-humor that makes Lego Dimensions tick expects the audience to be familiar with the source material, and I just don’t know to what extent kids are familiar with Portal. I could be wrong about that. Portal isn’t too complex and it’s not as if kids don’t ‘get’ dark subject matter. My point is simply that the audience for Portal – and by extension the audience that will get jokes about Portal – is likely to be a little older than the stated target audience for Lego Dimensions.

Which is fine. Video games like Lego Dimensions can appeal to adults just as readily as they appeal to kids, and the inclusion of properties like Ghostbusters, Doctor Who, and Portal would seem to indicate that Warner Bros. wanted to attract an older fan base out of the gate. After all, someone has to purchase all those toys.

But when there are so many modern media properties that are made explicitly for children – many of which already have adult fan bases – it starts to feel like the parents are piling into the sandbox and monopolizing all of the kids’ best toys. Portal seems like a way to make Lego Dimensions safe for adults, to lure people in with memes about cake and other signifiers of insider status drawn from an earlier console generation, making it less about the joy of play and more about capitalizing on Internet snark for older players that want to be told that their references are still relevant.

It works. The Portal 2 Level Pack is pretty damn sweet, and Warner Bros. is probably going to make a mint selling expansions to people’s inner children (full disclosure: I am one of those inner children). But if all us grown-ups want to play with toys, we shouldn’t need licensed products to give us permission, and our need to reconnect with our youth should not supersede our children’s right to enjoy the one they have.