The second program in the Short Cuts International program features films that revolve around desire and the lengths some will go to fulfil them, from looks at forbidden love to the quest for an elusive ice cream cone.

Kaveh Ebrahimpour’s debut short from Iran, A Ceremony for a Friend drops us in the middle of an awkward conversation between a group of people. The audience is left in the middle of this tedious conversation without any context, just a staring blank face from the protagonist of the piece and a lot of dialogue yelled by the people surrounding him. The concept may be interesting, but the execution leaves a bit to be desired in its own right. It’s too deadpan for its own good.

From the UK, I’m in the Corner with the Bluebells is another conversation driven piece about a half-brother and half-sister meeting for the first time as adults and finding themselves irresistible attracted to each other. The complications in stage actor Ako Mitchell’s filmmaking debut are that the sister is already married and her husband and daughter spend the movie observing the growing infatuation along with other family members over dinner. The performances from the leads are both good and the non-linear aspects of the film deliver enough context to sell a well constructed, ambiguous ending.

Ice Cream is the only concern of Rojhat,. He spends his day harassing his mother, who has clearly had enough of his antics and shows outright disdain for the child. But when the ice cream man comes looking for money or trade for the delicious treat, Rojhat springs to action. A fun dissemination of the desires that drives young children to single-mindedly disobey their parents (and everyone else for that matter), Serhat Karaaslan’s Turkish delight also shows us looks at growing up impoverished, while still keeping a lighthearted tone, never betraying either feeling. 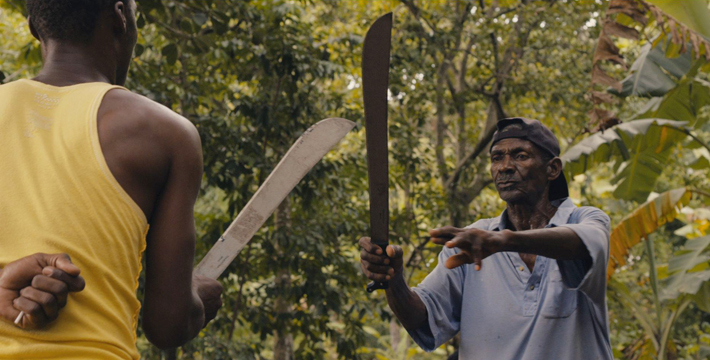 Papa Machete is a documentary that takes us into the world of Alfred Avril, one of the last remaining practitioners and masters of the old fighting style known as ‘tire machete’. Teaching everyone that desires to learn, Alfred ignores traditions in order to fulfil his desire for the art form to carry on, even driving 2 of his sons to master level expecting them to carry on after he leaves. Jonathan David Kane’s film shows a dogged man refusing to retire, but tire machete is not without injury. They’re using real machetes, and his lack of concern when he cuts his sparring partner speaks more to his desire to carry on than an uncaring attitude about his student.

Denmark’s Growing Pains by Tor Fruergaard  is the only animated piece of the program, and features the son of an overbearing and manipulative single mother coming to grips with his feelings of first love. But things don’t go smoothly, as Fabian discovers that he goes through and elaborate change whenever he is fully aroused. This fun coming of age story is the best of program 2, and feature some excellent animation and a very fun and engaging story. Fabian ultimately rides off into the sunset with the object of his desire, but not before a decision nearly changes everything for the worse.

Seven Boats, a film about a man lost at sea told in a single 360 take, was unavailable to be screened at press time. (Kirk Haviland)