Featuring gorgeous backdrops and exquisitely framed cityscapes, the final program in the Short Cuts International series is filled with cinematic treats of film and animation, and also includes a unique use of 3D.

The 3D technique is used by director Matthu Placek in his sprawling crane shot examination of the then abandoned future home of the Marina Abramovic Institute, 130919 • A Portrait of Marina Abramovic. The film shows the interior of the building stripped bare, along with the performance artist herself Abramovic being equally bare, as the character of the old building gets to shine before being redone with a new facelift. (Note: Only the 2D version was available to watch at press time.) 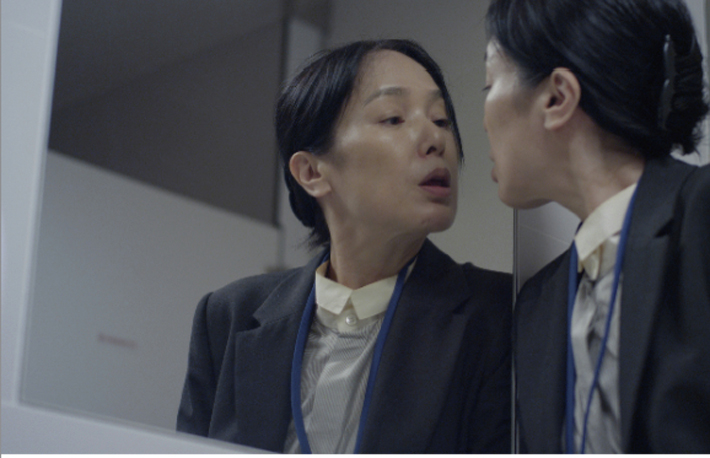 Oh Lucy! is a fun little oddity out of Japan that centers on Setsuko, a single office worker who is roped into a English teaching scam by her unreliable niece and discovers herself along the way. Atsuko Hirayanagi’s film is blessed a brilliant performance from out lead Kaori Momoi. Her turn is acerbic, angry and madcap slapstick at different parts of the film and this small story takes on greater scope with many double crosses in its final act.  Oh Lucy! is a real charmer.

The most fun in Program 5 comes from the utterly delightful stop motion animated Pineapple Calamari. Pineapple is a horse that loves to run free and yearns for that one last trophy. But when tragedy strikes at the farm where Pineapple lives, roles and obligations are mixed up and swapped to hilarious effect. Director and co-writer Kasia Nalewajka delivers a simple yet touching and hilarious tale that will charm any audience, no matter what the age.

One of the more profound films of this program comes from directors Hamy Ramezan and Rungano Nyoni’s gripping take on dialect and language, Listen. A mother faces the daunting task of convincing the Copenhagen police that she is regualrily beaten at home and must protect herself and her son by being in police protection, all while dressed in a full burqa and lacking the ability to speak Danish. The film plays with the police procedural a bit, but mainly just ratchet ups the tension until a shocking finale changes everything. Listen is a solid procedural with some good performances.

Midfield may be the one of the most inspirational 5 minutes you`ll spend watching a film all year. What starts as a simple document of men heading to work takes a drastic turn when the camera shows you that one of the supervisors has no arms past the elbow. But this isn’t the only surprise this man has in store for us as this uplifting story goes past the warehouse to show much more. Director Pedro Amorim has an accomplished feel behind the camera and knows when to pull back the film enough that Midfield never evolves into the pure pap some inspiration docs fall trap to.

German Shepherdrd features a familiar voice over animation narration style to the film, but the subject matter is quite unique. David Paul’s vision of Germany has always been skewed by his German hating Jewish mother, who despise all because of the war. But David wants to know more and travels to Germany many times. German Shepherd does a decent job with the ramblings of David, but the problem comes in the fact that the narration is ramblings, and the animators seem to get lost along the way. A solid effort from director Nils Bergendal just comes up short compared to some of the other animated titles in the Short Cuts series this year.

The Goat, about a young man’s ritual circumcision and the fear of homosexual desire in a small African village and Pixar’s newest short animation about the tropical isles Lava, were both unavailable at press time.