Poor Aquaman. The DC Comics superhero really gets the short end of the stick in mainstream comic book culture; people love to make fun of Aquaman like he’s Ryan Lochte. Here’s the thing, though; while most people think of Aquaman like this:

My point is, if Aquaman really tried, he could honestly be pretty badass. Yes, he’d have to really try, but he could pull out some theatrics if the situation called for it.

Unfortunately, the same can’t be said of every character in comic book history. Here’s my list of the top ten superheroes (or supervillains!) who are way lamer than Aquaman.

High on the list because it’s almost too easy, Squirrel Girl was created for Marvel in 1992 by Steve Ditko and Will Murray, who based her on one of his ex-girlfriends (um, okay). Squirrel Girl and her fuzzy sidekick Monkey Joe have the ability to literally control legions of squirrels. Also, she can talk to squirrels. And she has “squirrel-like abilities.” I think you can see where I’m going with this. Squirrel Girl was a member of the Great Lakes Avengers, and now she moonlights as Luke Cage’s nanny while attending NYU. Just a guess, but she’s probably not super popular on the quad. 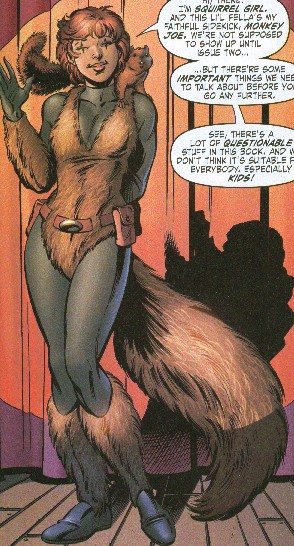 Also her squirrel is named Monkey Joe, so, that’s about as much sense as this whole character ever makes.

So lame she was rejected from DC’s Legion of Super-Heroes, Drura Sehpt was created by Cary Bates and Dave Cockrum. She arrived on Earth from the planet Somhtur, where everyone constantly plays host to a disgusting multitude of bio-organisms which can infect others with deadly diseases. Basically what I’m saying is Drura is a giant walking petri dish, and she is super disgusting. Imagine sitting next to that guy on the subway who won’t stop coughing, and all you want to do is change seats, but you can’t because it’s too packed, and now you’re definitely sure you’re going to get sick and ugh.

Welp, that’s her whole superpower. That’s it. And since her aim and control are kind of terrible, she often infects her allies. I think I’d rather save myself, thanks.

Already obsolete in Canada, the Almighty Dollar was created by Buzz Dixon, Mike DeCarlo, and Jose Delbo, and I hope they feel a little bit bad about it, quite frankly. Just a regular ol’ certified public accountant, J. Pennington Pennypacker (yep) attended a self-esteem camp that was actually run by a mad scientist, and ended up with a superpower as a by-product.

Well, I said “superpower,” but what I really meant was “he can shoot pennies out of his wrists.” Dead serious. It’d be like if Spider-Man only had his webslingers, but instead of shooting web they shot something that the government barely wants to produce anymore. JPP used to hang out with NFL Superpro (a lame Captain America rip-off), Streak (a lame Flash rip-off), Calculator (a super-smart Korean actuary), and Girth (a dude with a beer belly). I made literally none of that up.

I hardly know where to begin with this one, especially given the fact that whomever created Codpiece (rightly) doesn’t want their name on the internet. Basically, Codpiece was just a normal, insecure fellow, who at one point misunderstood a girl who called him “short” and assumed she meant that he had a teeny peen. Subsequently rejected by numerous women, Codpiece always assumed it must have something to do with his junk, and not with the fact that he was probably just a huge insecure jerkwad.

To get revenge for all the women who were totally mean to him, you guys, Codpiece went ahead and built himself some go-go gadget manties, complete with rocket cannon, spring-loaded boxing glove, and giant drill. The misogyny here, I just can’t even… Eventually Codpiece was destroyed by the dissolving powers of transsexual superhero Coagula, so I’ll let you make of that what you will.

I want you to go ahead and imagine, for a moment, what Superman would be like if he was even more of an insufferably kind do-gooder. You can’t, can you? Well, Alan Grant and Val Semeiks achieved the impossible when they created Goldstar, an imitation Superman whose sole distinguishing feature is his ability to spread niceness. Seriously.

I’m not kidding about his saccharine qualities, either; Goldstar would literally help grandmothers across the street by giving them gold stars. There’s also a backstory here about an evil twin brother, but honestly, the guy goes around making people feel bad about bad things they’ve done. Superman would totally beat this guy up in the schoolyard.

I’m going to let the first few sentences of Jubilee’s Wikipedia article speak for me, here:

“A mutant, Jubilee had the superhuman power to generate “sparkles” out of her hands, consisting of explosive plasma. A teenage “mall rat,” she was the X-Men’s youngest member in the early 1990s, often playing sidekick to Wolverine.” Basically, Jubilee (created by Chris Claremont and Marc Silvestri) is the Robin Sparkles of X-Men, except she has literal hand-sparkles and says “like” a lot. 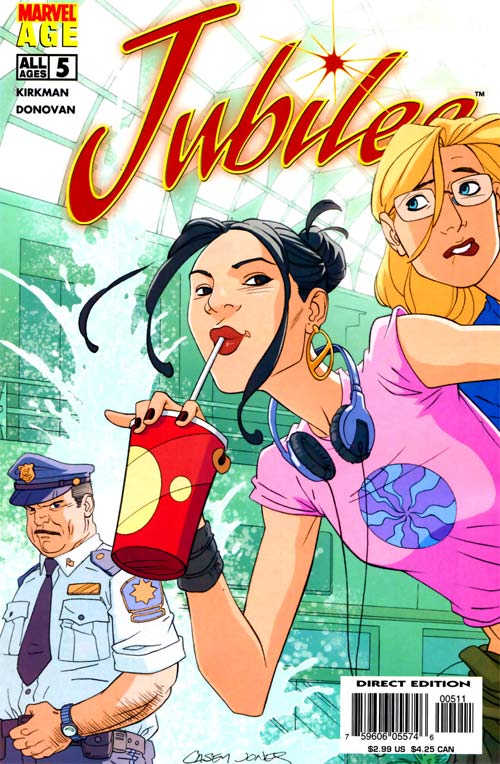 In 2004, Marvel even tried to revive Jubilee with a self-titled series written by none other than Robert Kirkman, and even that was cancelled after six issues. To paraphrase a line from the best film about teen girls ever made: And then Jubilee dropped out of the X-Men because no one would talk to her, and she came back in the fall for school, all of her hair was cut off and she was totally weird, and now I guess she’s a vampire. She is going to be in the all-female New X-Men series. so we’ll see how that goes.

If you can’t already tell what’s wrong with this character, I really don’t know how to help you. First appearing in the 1940s, I guess before people used “whiz” as a synonym for “urine,” Robert Frank was just a wee lad visiting Africa with his father, when he was bit by a cobra. Thinking fast and obviously knowing nothing about medical science, Frank’s father gave him a transfusion of mongoose blood to save him, which somehow bestowed Frank with powers of super-speed.

Whizzer later re-named himself Speed Demon, because The Flash was already taken, and probably also because Mongoose Man is actually more embarrassing than The Whizzer.

One of our most modern entries on this list comes from the minds of Peter Milligan and Mike Allred in 2001, recent enough that they should have known better. At first, she doesn’t sound so bad: Beckah Parker was a member of X-Force, and she had the ability to generate seismic waves. Not too shabby, right?

Wrong. Unfortunately for everyone ever, Parker could only generate seismic waves equal to her blood alcohol content level. Nothing like an abusive alcoholic superhero who sometimes gets plastered on missions and shoots earthquakes at her teammates, amirite? I’m assuming her drink of choice was gin.

Cursed with a name that sounds like the title of a bad Will Ferrell movie, The Black Condor was originally a Quality Comics character, picked up by DC (a move I’m sure they don’t regret at all). Abandoned in the wilds of Mongolia as a newborn, Richard Grey Jr. was rescued by a local band of super-advanced and intelligent Condors (like, the bird), who taught him how to fly (???).

There have been more recent versions of The Black Condor who have received their powers from genetic experiments and Mayan Spider Goddesses, but let’s be serious – what is more hilarious than being the horrible bird-version of Tarzan?

For our winners, here we return to the Legion of Super-Heroes, who are from the 30th century and obviously pretty lax in their admissions standards. First, we have Arm-Fall-Off Boy, who is pretty much his own punch line – he can detach his arms and then beat people with them. So, yeah, I guess he can really only detach one at a time, then.

Arm-Fall-Off Boy shares first place with Tenzil Kem, better known as Matter Eater Lad, who has the super-ability of being able to eat all of the things. Seriously, Matter Eater Lad can just eat things. That’s his whole schtick. Let’s let Wikipedia take over again and wrap this up for us:

“Matter Eater Lad appears rarely in Legion stories, as the writers struggled with the problem of how to make his power useful in a fight and was routinely written out via a plot device where Tenzil was constantly being drafted into his planet’s political system due to his fame as a Legion member.”

Do you know of any lame superheroes who didn’t make the list? Let me know in the comments, or shout them at me on Twitter @SamMaggs!