North by Northeast 2010 is upon us! That means I have ringing ears and a sore ass ahead of me, thanks to the over 600 live music acts and an ample assortment of music themed documentaries that are taking Toronto by storm this week. This is simply a list of things I plan on checking out during NXNE, things that I think my fellow dorks will appreciate. I’ll admit that I’m not as up on new music as some, if you want the real scoop on up-and-coming bands at NXNE then be sure to read Jessica’s NXNE 2010 picks.

We’re barely scratching the surface here though, there is so much to see and do at North by Northeast. Be sure to check out the official NXNE 2010 website for ticket info and the full schedule or just go buy a wristband and get out there and see what you can!

The Balconies – It sounds odd, but The Balconies could best be described as Joy Division meets The B-52’s. Liam Jaeger and Jacquie Neville share primary vocal duties, playing drums and guitar respectively, while Neville’s brother Stephen backs them up on bass and vocals. Jaeger’s Joy Division-esque voice is a perfect compliment to Neville’s huge and powerful vocals. The heavy percussion and catchy riffs don’t hurt either. – CN Tower @ 7:00 p.m.

Eagles of Death Metal – An excellent way to open NXNE. The brain child of musicians Jesse Hughes and Josh Homme (Queens of the Stone Age), Eagles of Death Metal are one part garage rock band infused with bluegrass and another part seedy, grinding riffmeisters who frequently drown the stage with awesome. Sadly, Homme is not part of their touring lineup, but Hughes is legendary for his showmanship. Do not miss it. – Phoenix @ 11:00 p.m.

Do It Again –  Journalist Geoff Edgers sets out to reunite the remaining members of his rock heroes, the legendary Brit-Invasion band The Kinks. Along the way he interviews Sting, Paul Weller and Zooey Deschanel.  – National Film Board @ 2:30 p.m. 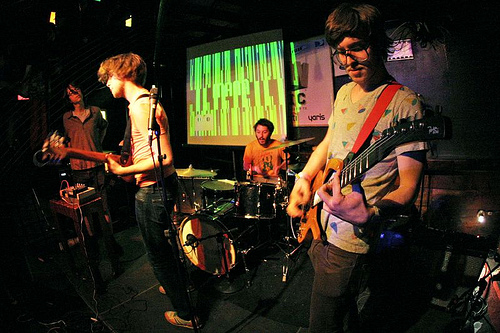 Anamanaguchi – This awesome chiptune punk band makes their 8-bit infused music using hacked Gameboys and Nintendo Entertainment Systems as synthesizers. Need I say more? Fine, the band is also composing the music for the video game adaptation of Scott Pilgrim vs. the World being made by Ubisoft – Whippersnapper @ 11:00 p.m.

HEALTH – This eccentric Los Angeles-based noise rock outfit became known for playing free shows and opening for Nine Inch Nails. Did I mention that Eric Wareheim of Tim & Eric fame made a really fucked up music video for their song “We Are Water”?. No? Well, he did. These guys are likely going to destroy Sneaky Dee’s. – Sneaky Dee’s @ 12:00 a.m.

Zeus – Just in time for summer, Zeus plays upbeat pop rock that’ll put a smile on your face. Until recently they had been the backing band for Broken Social Scene’s Jason Collett, but we’re all better off now that they’ve gone solo. – Rivoli @ 10 p.m.

Buck 65 –  This Nova Scotia-born MC and turntablist has already made his mark on Canadian music scene. Buck 65’s music is a strange and awesome blend of folk, blues, rock and hip-hop. You’re unlikely to hear anything like him. – Rivoli @ 11 p.m.

Johnny Cash’s America – Documentary film about the Man in Black, his life and his music featuring never-before-seen photos and footage, plus interviews with his family, friends and contemporaries. This is the only documentary where you’ll get to see Ozzy Osbourne, Snoop Dog, Bob Dylan and Al Gore talk about Johnny Cash – Hyatt Regency @ 6:00 p.m.

This Movie is Broken – Director Bruce McDonald (Hardcore Logo, Pontypool) creates a film that is one part concert film about Broken Social Scene and one part love story between two Toronto friends. McDonald continues to do interesting and unique work, hopefully This Movie is Broken follows in that tradition. Dubbed a “rock show romance” you can check out the trailer for the film here. – The Royal Cinema @ 7:00 p.m.

When You’re Strange: A Film About The Doors – This intriguing documentary about the formation and rise of The Doors features rare footage actually shot by Jim Morrison and Ray Manzarek. Drolly narrated by Johnny Depp, the film is a must for anyone interested in learning about The Doors or Jim Morrison. Though there probably isn’t much new for fans of the band, it’s still a compelling look at the music scene in the late 1960’s – Hyatt Regency @ 8:00 p.m.

Timber Timbre – The spooky blues guitar and haunting melancholy vocals from Taylor Kirk will do things to you. But don’t let me scare you, Timber Timbre just signed to local label Arts & Crafts, this is one act that is definitely worth your time.- Gladstone Ballroom @ 10:00 p.m.

K-OS and Sloan – No, they aren’t actually playing together, although that would be interesting. Two mainstays of the Canadian music scene are playing a free show on Friday night; from K-OS’s soulful genre-bending hip-hop to Sloan’s power pop rock, there’s something here for everyone. Unless of course you hate life. – Yonge-Dundas Square @ 8:30 p.m.

Suck – The film follows a unsuccessful rock band on their North American tour.  As the members of the band are turned into vampires one by one, a mysterious man named Eddie Van Helsing starts asking questions about them. It’s a Canadian vampire rock-and-roll comedy featuring Dave Foley, Iggy Pop, Malcolm McDowell, Moby and Alice Cooper.  This kind of movie doesn’t come along too often.  Plus I’ve always been a sucker for Canadian actress Jessica Paré. – The Bloor Cinema @ 9:45 p.m.

Iggy and the Stooges – Headlining NXNE 2010 are Iggy and the Stooges. If you are unfamiliar with these gentlemen, I invite you to click this link for an education in protopunk. Inarguably one of the most important precursors to the punk movement, The Stooges changed the course of music in 1973 with their epic, speakers-at-eleven album Raw Power. Iggy Pop and the boys may be older, but they can likely rock harder than anyone half their age. It’s a free show and it’s sure to be a blast. – Yonge-Dundas Square @ 9:30 p.m.

The Meligrove Band – This local group just released the first single from their new album for free online, and it sounds great. If you like the whimsical, dreamy quality of The Flaming Lips or the upbeat pop sound of Sloan, then you’ll probably like The Meligrove Band. They put on a good show when I last saw them live, I imagine their showmanship hasn’t changed since then. – Wrongbar @ 9:00 p.m.

Search and Destroy: Iggy Pop and The Stooges’ Raw Power – Examining the creation of The Stooges’ legendary 1973 album Raw Power. Featuring new interviews with Iggy Pop, James Williamson, Scott Asheton and many others. See the doc and then go see The Stooges live at Yonge-Dundas square for free on the same night. – Toronto Underground Cinema @ 5:00 p.m.

Stones In Exile – Assembled from original footage and pictures, this documentary captures Mick Jagger, Keith Richards, and the rest of the Rolling Stones as they hole up in the southern France to create one of their best albums: Exile on Main St. – Toronto Underground Cinema @ 9:00 p.m.

De La Soul – This highly influential, legendary hip-hop crew is playing a free show in the heart of downtown Toronto. For you kids who don’t remember De La Soul’s heyday in the early 90’s, they more recently collaborated with Gorillaz on their smash hit “Feel Good Inc.”. If you only know them from that, listen to this and come to this show.  – Yonge-Dundas Square @ 9:30 p.m.

Boys Who Say No – Toe-tapping, fist-pumping, head-bobbing party pop meets country. These gents play a mean live show, you’ll quickly learn that the ukulele can make any song even better. – The Garrison @ 11:00 p.m.