The 2009 Toronto International Film Festival starts tomorrow, running from September 10th until the 19th.  Featuring over 300 films from over 60 countries, the festival has an amazing lineup of movies this year.  Dork Shelf will be there, giving you all the latest news and reviews from the 34th annual film fest.

You can expect reviews from myself, Noah and our new contributor Shelagh in the coming weeks.  Noah and I have actually seen a few of the films playing the festival already. We’ll have those reviews up before they play at the festival.

Here are my picks for the films I’ll be trying to see at TIFF this year, why I think you should see them, trailers and screening times. There are hundreds of other amazing films playing at the festival this year, so be sure to check out the Official Toronto International Film Festival Site.

Joel and Ethan Coen’s latest film follows the existential crisis of a Jewish man living in 1960’s Minnesota.  The main character Larry Gopnik seeks the advice of three different rabbis as he struggles to deal with his dysfunctional family and backstabbing work colleagues.

Why you should see it: A Serious Man marks a return to form for the Coen Brothers; a much more serious and twisted vision than their last film, the disappointing Burn After Reading.

See the trailer for A Serious Man here.

Monday September 14th 9:00AM at Scotiabank

Why you should see it: Werner Herzog directing Nicholas Cage in full on crazy mode.  Plus the added bonus of not having to sit through another Harvey Keitel full-frontal nude scene.

Vampires rule the world and humanity is nearly extinct.  With the vampire population running out of humans to farm for blood, the remaining humans stage one last desperate fight.

Why you should see it: Despite the fact that it sounds essentially like The Matrix with vampires, the film has great buzz leading into the festival.  Daybreakers has an awesome cast led by Ethan Hawke, Sam Neill and Willem Dafoe, it’s sure to be one of the crowd favourites at Midnight Madness.

See the trailer for Daybreakers here.

Woody Harrelson takes to the streets as the bumbling, costumed vigilante Defendor; protecting the streets from his nemesis Captain Industry.

Why you should see it: Woody Harrelson running amok as a crazed vigilante on the streets of Hamilton, Ontario.  I’d pay to see that?  Wouldn’t you?  Plus Defendor co-stars the super-cute Kat Dennings as a hooker with a heart of gold.

See the trailer for Defendor here.

Wednesday September 16th 11:45AM at Scotiabank

Gaspar Noé’s followup to his controversial 2002 film Irréversible sounds like his most ambitious film to date.  The film follows the drug-fueled lives of a low-level dealer named Oscar, and his exotic dancer sister Linda, as they eke out an existence on the seedy side of Tokyo.

Why you should see it: Like Noé’s other films, Enter The Void is rife with interesting visuals puncuated by brutal violence and explicit sex.  The film will probably disturb you, but it will likely provide you with an experience that you won’t soon forget.  Bonus: the film’s sound design was done by Thomas Bangalter of the band Daft Punk.

Michael Caine plays Harry Brown, an aging widower and former Marine fed up with the gang violence destroying his neighbourhood.  When his friend is murdered and the gang member responsible goes free, Brown decides to take matters into his own hands.

Why you should see it: Before his more recent turn playing elderly father figures, Caine made a career out of playing badasses in the 1960’s and 70’s.  To see him return to the crime-thriller genre will be a real treat.

The Imaginarium of Doctor Parnassus

A travelling theatre impressario makes a deal with the devil (played by Tom Waits), giving him access to a magic mirror that acts as a doorway to a world beyond reality.  Naturally, the devil comes to collect on the deal, kidnapping the impressario’s daughter.

Why you should see it: Under different circumstances, I would say you should see this film because it’s the latest film from the amazing Terry Gilliam.  But everyone knows that there is another reason to see Parnassus — the film features the final performance of Heath Ledger.

See the trailer for The Imaginarium of Doctor Parnassus here.

A harrowing tale about the Norwegian resistance against Nazi occupation during the Second World War.  When Norway is invaded by Germany, Max Manus and his friends form a resistance group, carrying out various acts of sabotage and civil disobedience.  As time goes on, the war takes an increasingly personal toll on Manus.  More and more of his friends and compatriots are killed or captured by the Nazis, often leaving Manus as the sole survivor.

Why you should see it: Max Manus is one of the most critically well received and profitable movies to ever come out of Norway.  And who doesn’t love a good Second World War espionage film?

The Men Who Stare At Goats

An investigative reporter learns of a top-secret US Army program that has been trying to create psychic soldiers.  Part of the program involves soldiers trying to telepathically kill goats by staring at them.

Why you should see it: The film’s ridiculous premise combined with an amazing cast featuring George Clooney, Ewan McGregor, Jeff Bridges, Kevin Spacey and Robert Patrick make me very curious this one.

See the trailer for The Men Who Stare At Goats here.

Sunday September 13th 11:30AM at Ryerson

My Son, My Son, What Have Ye Done

Directed by Werner Herzog and produced by David Lynch, the film centres on a cop dealing with a murder investigation and a hostage crisis.  What starts off as run of the mill murder mystery, soon descends into disturbing Lynchian territory.

Why you should see it: If you ever wanted to see Werner Herzog try to make a David Lynch movie, then My Son, My Son< écite> should be right up your alley.  The film also stars Michael Shannon, fresh off his Academy Award nominated performance in Revolutionary Road.

See the trailer for My Son, My Son, What Have Ye Done here.

Thai martial arts phenom Tony Jaa returns in Ong Bak 2, this time “acting” as well as directing.  I have no idea what Ong Bak 2 is about, but chances are there will be an elephant involved somehow and numerous people will be kicked in the face.  That’s enough for me.

Why you should see it: No wires and no stunt doubles — just pure, unadulterated martial arts mayhem the way only Tony Jaa can deliver.

Saturday September 19th 9:45AM at Scotiabank

Sequel to the amazing Spanish horror film [REC] — which was remade into the terrible Quarantine — the film centres on a camera equipped SWAT team as they are sent into the apartment building from the first film.  Thanks to a disease that has made the residents of the building crazed and extremely violent, the SWAT team must fight or die.

Why you should see it: From personal experience, I can tell you that seeing this kind of action-horror film with the Midnight Madness crowd is a blast.  The first [REC] film was truly frightening; with the right audience the sequel will be a film experience you won’t soon forget.  Midnight Madness programmer Colin Geddes has called [REC] 2 “Aliens to Alien, a sequel that ramps up the action but does not defile the spirit of its predecessor.”.

Solomon Kane is a 16th century rogue and mercenary, who kills and steals for a living.  After an encounter with the Devil, Kane realizes that he must renounce his wicked ways or be damned to Hell for all eternity.  He becomes a Puritan and dedicates his life to destroying evil.

Why you should see it: Think Van Helsing, but better.  James Purefoy, who was great as Mark Antony on HBO’s Rome, is playing the titular character in Kane.  If you saw that show then you know this role is perfect for him.  Also, it needs to be noted that the character of Solomon Kane was the creation of legendary pulp writer Robert E. Howard, the man who gave us Conan the Barbarian.

The film follows a unsuccessful rock band on their North American tour.  As the members of the band are turned into vampires one by one, a mysterious man named Eddie Van Helsing starts asking questions about them.

Why you should see it: It’s a Canadian vampire rock-and-roll comedy featuring Dave Foley, Iggy Pop, Malcolm McDowell, Moby and Alice Cooper.  This kind of movie doesn’t come along too often.  Plus I’ve always been a sucker for Canadian actress Jessica Paré.

See the trailer for Suck here.

George A. Romero’s Survival of the Dead 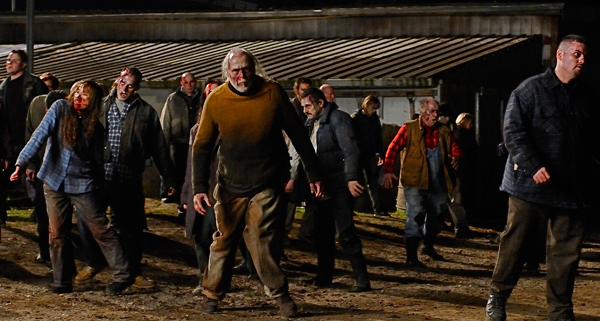 George A. Romero’s latest zombie film takes place years after a zombie apocalypse has destroyed the world.  Residents of a remote island have survived thanks to their isolation.  Survival is a daily struggle, but all the while the residents of the island seek to find a cure for the zombie epidemic.

Why you should see it: I wasn’t a fan of his last few films, but it’s a zombie film from the man who started the whole zombie genre.  Also, Romero is Canadian now, we should show him some love.

See the trailer for George A. Romero’s Survival of the Dead here.

A man wakes up in a white room with no apparent exit.  He struggles to escape the room as things become more and more strange.  All the while, a Mexican wrestler named Escargot Man prepares for an important match. Sounds weird, I know.

Why you should see it: Symbol is from the creators of DAINIPPONJIN, the off-the-wall kaiju-battle comedy that rocked Midnight Madness.

See the trailer for Symbol here.

John Hillcoat’s adaptation of the post-apocalyptic Cormac McCarthy novel follows a father and son as they struggle to survive after the end of civilization as we know it.  Thieves, murderers and cannibals wander the roads between the wasted towns and cities of the United States; they stand between the father and son and the coast.  How do you find the will to live in a world that’s not worth living in?

Why you should see it: Hillcoat captures the absolute horror of a world gone mad, the film is a spot on adaptation of McCarthy’s Pulitzer Prize winning book.  Viggo Mortensen turns in an Oscar worthy performance, and the boy, played by Kodi Smit-McPhee is excellent as well.  It’s a brutal, gut-wrenching film but well worth seeing.

See the trailer for The Road here.

This Belgian stop-motion animated film based on the television show of the same name follows the adventures of a toy Cowboy, Indian and Horse.

Why you should see it: A Town Called Panic is the first G-Rated film to appear at Midnight Madness.  It’s a surreal journey that everyone can appreciate.

See the trailer for A Town Called Panic here.

When his family is killed by a Triad gang, Francois, a French former assassin-turned-chef travels to Hong Kong to avenge their deaths.

Why you should see it: Vengeance is directed by Johnnie To, best known for the excellent Election trilogy, Exiled and Mad Detective.  The neo-noir features To’s trademark hyper-stylized action and co-stars To’s frequent collaborators Simon Yam and Anthony Wong.  Johnny Hallyday, France’s answer to Elvis, plays the lead in the film.

See the trailer for Vengeance here.

Why you should see it: Michael Cera playing an awkward teenager?  Shocking, I know.  That said, the book the film is based on is by all accounts very good.  Plus the film co-stars Ray Liotta and Zach Galifianakis as Nick’s mother’s boyfriends.

See the trailer for Youth in Revolt here.