Few people in any profession could ever have their careers summed up in a single word, and even fewer in a word best used as an exclamation. “Woah” might be the word most freely noticeable in the cinematic lexicon to be intertwined with the entire career of Keanu Reeves. The leading man with character actor leanings has been a large box office draw and an intriguingly divisive personality over his almost 30 year long career. While many see him as a welcome, low key presence, many others see him as almost too somnambulant to hold a viewer’s interest.

The undeniable fact of Reeves’ career is that one could never accuse him of sticking too close to the same material all the time. From romantic comedies and Shakespearian adaptations to high octane action films and cerebral sci-fi tinged thrillers, Reeves has always found his own unique way of placing himself into films that test and subvery genre conventions.

With a retrospective of the still fairly young actor kicking off at the TIFF Bell Lightbox in Toronto this Friday, Andrew Parker and Phil Brown look at the films selected to make the audience truly go “Woah.”

I remember talking to Goon director Michael Dowse during the promotional tour for that beloved hockey comedy and having quite the discussion about one of Keanu’s first films, the on ice drama, Youngblood. Looking back on everything, we both agreed that this story of a minor league hockey star (the ravishing Rob Lowe) on his way to super-stardom comes off as being far too pastorial in spite of darker elements, but we had nothing but nice things to say about two aspects of the production: how great everyone’s hair is and just how amusing it is to watch Reeves play a Quebecois goalie. It’s generally forgotten about even with the low number of films that have actually been made about hockey, but it’s a great starting point in the actor’s career that hints at the greatness that was about to follow (Andrew Parker)

In terms of truly dramatic performances, Reeves has only delivered two that flat out wow the audience in terms of emotional believability. One comes in the always overlooked and sadly not included Sam Raimi thriller The Gift, and the other in this early work where he plays a loveable young stoner caught in an incredibly bleak situation, asked to defend the name of a confessed killer in a small town. Based on a true story and featuring incredible performances all around (including Crispin Glover at his most serious and unflinching and Dennis Hopper), Reeves provides the only real heart and soul in the film and the only character worth rooting for. It’s pretty depressing stuff, but it’s unquestionably one of Reeves’ finest moments. (AP)

Keanu’s vacant charms first hit most audiences with this totally bodacious comedy about a pair of Southern Californian burnouts whose garage band could be broken up if they don’t ace their history presentation. Thankfully they’re the saviors of the future, so a time traveling phone booth is sent back to help the duo out. You know, that old tale. It’s undoubtedly one of the great 80s comedies that’s aged well and dated hilariously in a rather perfect way. Much like when everyone caught their first glimpse of Stallone as Rocky, it was assumed by most folks that Reeves was an incredible actor who has masterfully created a brain dead teen for comedic brouhaha. We’d soon learn that’s just him and a perfect application of limited talents. That doesn’t make this comedy classic any better or worse, but it does make it an interesting footnote in his career. (Phil Brown)

Show me a person who can’t find at least something to love in this tale of zen surfing, adrenaline junkie skydiving, bank robbery, and bro-downs and I’ll show you someone without a soul. Long before she was making politically ambiguous Oscar bait, Kathryn Bigelow was one of the finest action peddlers in Hollywood and the first director to ever consider the ass-kicking potential of Reeves. Keanu starts the film as an uptight goody goody cop, ends the film as a chilaxed surfer and in between he buys Gary Busey two meatball subs, jumps out of a plane without a parachute, and falls pretty much in love with Patrick Swayze. 90s action movies don’t get more absurd than this without playing the Nicholas Cage card. (PB)

My Own Private Idaho

Back during his post-River’s Edge period when people still thought Keanu Reeves was putting on his stoned face persona, Gus Van Sant hired him to headline this bizarre and experimental feature that remains one of the director’s best. A strange combination of street hustler diaries an a loose re-interpretation of Shakespeare’s Henry IV, My Own Private Idaho was one of the key moves to emerge from American indie film’s brief David Lynch inspired fascination with surrealism. A rather brilliant weird-for-the-sake-of-weird classic in which Reeves not only has to wrap his mouth around faux Shakespeare, but also deliver a monologue from the cover of a porno mag. With River Phoenix handling the harsh realism side of the script, Reeves is jammed into the Shakespearean section and while anything more than looking confused usually pushes his talents to the limits, Reeves actually handles himself fairly well. I suppose it’s a movie just strange enough for Keanu doing Shakespeare to fit in. (PB)

Here’s an interesting choice given that Keanu Reeves is easily the worst part of this movie. Granted Francis Ford Coppola’s take on Dracula was always going to be a mixed bag regardless of who played his role given that the directorial focus was something along the lines of “if you throw absolutely every idea at the screen and something is bound to work.” Coppola’s stylized-to-the-tits, bloody, and lovingly ludicrous take on the legendary vampire is a mixed bag combing masterful sequences with confused crap. Nothing drags the film down more than Reeves. The actor struggles to deliver something resembling a British accent, but succeeds in nailing a perfect facial impression of petrified wood. The good news that since the film invites equal amounts of ironic and genuine appreciation, one of Reeves’ career worst performances qualifies as a comedy highlight. It’s like watching a child discovering acting, only one who isn’t very good at it. (PB) 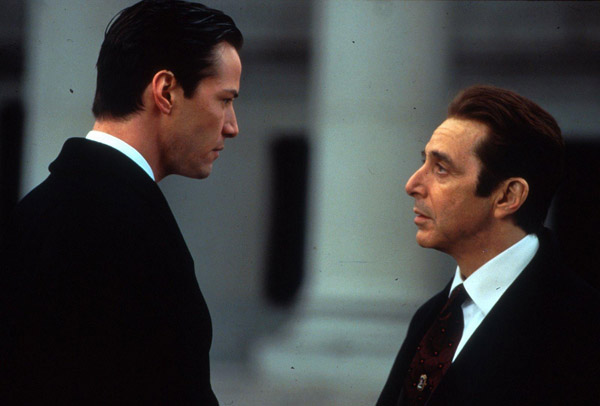 This modern day morality play can be accused of many things, but subtle definitely isn’t one of them. Caught between a hammy as hell Al Pacino as his devilish boss and a strangely overacting Charlize Theron as his confused and slowly frightened wife, Reeve’s plays a hotshot young attorney literally working for the devil in exchange for success and riches. While the film holds quite a great deal of fun in the acting department, director Taylor Hackford’s opus doesn’t need to be 140 minutes long (and trust me when I say that seeing the big screen theatrical cut is FAR preferable to the even longer Director’s Cut), Reeves has his work cut out for him playing the balance beam on which everyone around him has to lay their histrionics on. It might not seem like much, and the performance at the time was incorrectly defined as being one of his most vacant, but the character is just as confused as the audience is. Not many people could go toe to toe with this material, and even if it isn’t all that successful overall, Reeves deserves congratulations for what he was able to do here. (AP)

Pop quiz hot shot, what happens when you give Keanu Reeves a buzz cut and shove him on a city bus? Apparently a whole lotta s’plosions. In many ways Speed is the ultimate high concept 90s action flick. There’s a bomb on a bus and if it goes under 50 mph it will explode. Keanu plays the only cop who can save the day. Dennis Hopper plays the bad guy. Seriously, what more do you need? Simplicity is key with these movies and few action screenplays can match the sustained tension of Speed. After establishing the main characters with a separate solid action scene, it takes about 5 minutes to set up the central concept and from there the action/suspense doesn’t stop until the credits roll or you have a heart attack. Fast, funny, violent, and with just enough romantic eye-batting between Reeves and a young Sandra Bullock in a solid script re-written by Joss Whedon (who also did script doctor work on Toy Story the same year). This film made Reeves a full on action star and even though he’s more of a grounding presence than a hilarious distraction in this one, he does get to deliver the line “There’s enough C-4 on this thing to put a hole in the world.” So that’s special. (PB)

It’s one of the most successful films of the last half of the last century. It’s a great jumping off point to a series that squandered its potential. It’s one of the most written about films in history. Keanu Reeves was also the star, which almost feels secondary at this point, but since there’s nothing left to be said about the Wachowski siblings’ grandest theatrical moment, watching the film to take note of Reeves playing a character who has to literally awaken to the world around him might be interesting. (I’m personally not buying that statement overall, but after about 15 years I have just run out of interesting things to say about this one. I’m sure it still looks and sounds great on the big screen.) (AP)

While my reactions to some of the films in this programme might have been somewhat snide or off-kilter, my genuine love for this not all that faithful comic book adaptation is pretty genuine. Keanu stars as John Constantine, a paranormal investigator with a death wish following a botched suicide that left him as a vessel of sorts between two worlds. It bears extremely little resemblance to the Hellblazer series of works that spawned the character, but Reeves gets a chance to cut a little loose here as someone who stopped giving a fuck a long time ago. The action is pretty decent, the cast is stacked with people working well below their pay grade (Rachel Weisz, Tilda Swinton, Shia LeBeouf, and Peter Stormare as one of the best on-screen Lucifers ever), and it’s just a lot of fun in a world that logic shouldn’t enter into in the first place. It’s a bit of an underrated gem. (AP)

Director Richard Linklater often turns in his most intriguing work when he attempts his most experimental offerings. In his second go-around with strangely off-centre motion capture animation, Linklater uses the now newly minted Sci-Fi icon Reeves to tell his Philip K. Dick adaptation about a world not that far removed from our own that’s gone drug crazed. As an undercover NARC, Reeves gets to play the skittish man on the fringes of the law, giving a performance that seems even more suited to Linklatter’s animation style than his equally game co-stars. (AP)