As you might have heard, DC comics is turning September 2013 into “Villains Month,” where the baddest of the bad are going to be taking over their more virtuous counterparts’ titles for four weeks. While we already know that some of the confirmed villains for the takeover include The Joker, Poison Ivy, Darkseid, and Two Face, I started to think about who I might like to see take over some DC titles for a few weeks.

Not because they’d be scary, though. Oh no; you should know me better than that.

Because they’d be terrible.

Dr. Grace Balin was created by Larry Hama, and first appeared in Batman #579 in July of 2000 – much too recent to be excusable. Like every girl I know who never grew out of her weird Lisa Frank rainbow dolphin phase, Balin is obsessed with the ocean, and decides to become a Marine Biologist. Sadly, she is also confined to a wheelchair, and begins to experiment with spinal regeneration using orca spinal tissue. What could possibly go wrong?

It’s exactly as lame as you imagine. Balin develops the ability to transform into the fully-mobile Orca, whose powers are pretty much encapsulated thus: she can fight a little, and swim super well. She can’t even breathe underwater. Basically she transforms into Ryan Lochte, and decides to steal things. It’s awful, and I would love nothing more than to see Orca on the cover of a real issue of Batman.

A title first held by half-American, half-Australian George “Digger” Harkness, and later by his son Owen Mercer, Captain Boomerang’s only power is the ability to craft different kinds of boomerangs. A Flash baddie we can blame on Carmine Infantino and John Broome, Captain Boomerang shot into comics in December 1960, and turned to crime after audiences ridiculed his performance as a boomerang thrower (you don’t say).

Later versions of Captain Boomerang could create boomerangs out of energy that could explode on contact, but as boomerangs always fly back to their owner, this really seems like an idea that Digger didn’t put a lot of thought into. Can’t the Flash just run faster than a boomerang? Worst.. 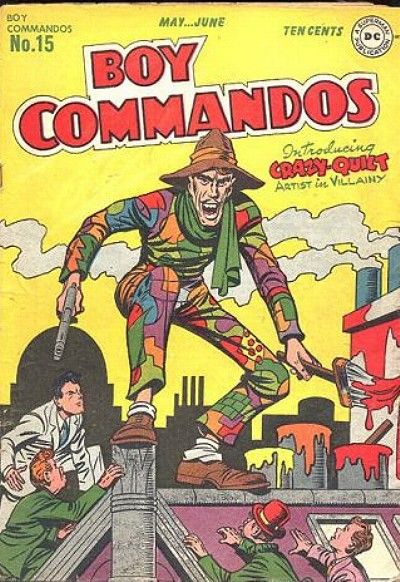 This one hurts, because both versions of this character were created by people I respect; first, Jack Kirby in 1946; and rebooted by Gail Simone and Dale Eaglesham in 2005. An artist struck blind by a gunshot would, Quilt is retrofitted with a special helmet to restore his vision; but, in a wacky twist, the helmet leaves him able to only see really bright colours. Apparently this is terrible, for reasons passing understanding, because it drives Quilt insane (“Crazy” Quilt, get it?). It also bestows the wearer with a ridiculous sense of fashion (I’m just guessing).

In 2005 Simone re-created Crazy Quilt as a female, but there’s really only so much you can do with such a terrible concept. .

Created by Bill Finger and Dick Sprang (YUP), Kite Man’s first appearance was in Batman #133, in August 1960. Charles “Chuck” Brown is awesome at hang-gliding, and is even named after the most famous kite-flyer of all time: Charlie Brown (I know, that’s a stretch even for me). Chuck doesn’t have much of a back-story, except that he’s wicked awesome at using kites, and decides to use his singular skill to commit some crimes, I guess.

He can do super rad things like, um… fly with a kite strapped to him! And sometimes, uh… throw a lot of kites at his enemies! Take that, Batman! I’d love to see an epic Batman-on-Kite Man kite flying battle in motion comic form. Let’s make this happen, DC.

I wish I could preface this entry with an apology and a note explaining that “it was a different time” when Big Sir was created, but honestly, his first appearance (at the hands of Cary Bates and Carmine Infantino again, if you want to blame someone) was in The Flash #338 in 1984. 1984. The same year we launched the space shuttle Discovery. We were definitely smart enough to know better, by this point in history. Here’s the thing about Big Sir… I can’t even do this. I’m just going to let Wikipedia explain for me:

“Born Dufus P. Ratchett, he had a malformed brain gland that caused him to grow to incredible proportions but left him mentally retarded. He was later abducted from his Central City Breedmore Mental Hospital home by a group of supervillains […] who equipped him with a high-tech suit of armor.”

Basically he is a mentally handicapped fellow with elephantitis, who has a magical suit that can fly, but is also very susceptible to telepathic suggestion. I don’t even have a joke for this. There are no words.

Batman just can’t escape his horribly embarrassing enemies. I keep picturing Batman sitting in the Batcave with his head in his hands like, “I bet Supes never has to deal with idiots like The Ten-Eyed Man.” Oh yes, created in 1970 by Frank Robbins, Irv Novick, and Dick Giordano, Philip Reardon was a Special Forces soldier in Vietnam until he was blinded in an explosion. Luckily (?) for Reardon, some genius with a doctorate from the ACME Academy of Medicine (probably) managed to reattach his optic nerve… To his fingertips.

So… he can see through his fingers. The Ten-Eyed Man can be thwarted by tricking him into touching or catching things that might hurt his eye-hands, like the time Man-Bat threw a shrub at him. That’d be a great issue, Batman just straight throwing things for hours. Gold.

Popping into existence in 1962’s Detective Comics #300, Abner Krill was created by Sheldon Moldoff. Apparently Moldoff wasn’t feeling super creative that day, because Krill doesn’t have a back-story; all we know about him is that he decided to attack Gotham City in a crime spree that revolved around polka dots.

You see, he has this costume (we’re also not sure where the outfit came from, mind you) which is covered in dots – and Krill can peel the dots off, making them into different handy crimey objects (like a flying saucer, because the 60s). Batman and Robin (poor, poor Batman) occasionally fight him, while laughing, one can only assume.

Imagine the lamest, dumbest jock you knew in high school. For our purposes, let’s make his name Lawrence “Crusher” Crock, because every dumb jock has a nickname like “Crusher.”  Now, picture Crusher, never able to get past his glory days, dressed in a weird mish-mash of uniforms:  catcher’s mask, football spandex, etc. Arm him with balls that explode (snicker)! Hockey puck bomb! Rocket bat! Really hard basketballs! Pretend he has something called “photographic reflexes” (that’s not a thing).

That’s Sportsmaster! He’s terrible. You can blame John Broome and Irwin Hasen, who dreamed this nightmare up in 1947. Crusher is that sad guy who never stopped wearing his letterman jacket, and I guess that’s why he commits crime now. 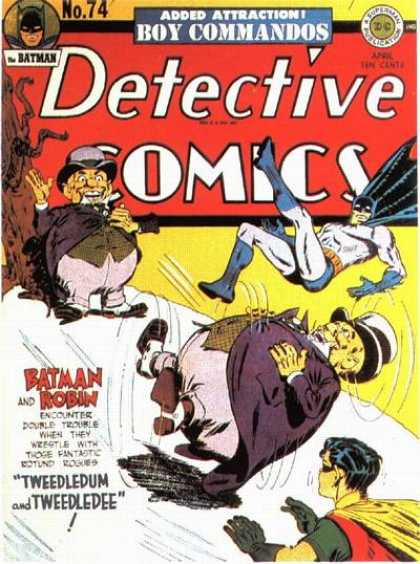 Dumfree and Deever Tweed (aka Tweedledum and Tweedledee) are Batman villains who were created in a time before copyrights really mattered (1943), by Bob Kane, Don Cameron, and Jerry Robinson. Their powers include being cousins, being almost identical, being fat, and rolling around. Seriously, at this point, I’m just offended on Batman’s behalf. He is the Batman. He deserves better than this. 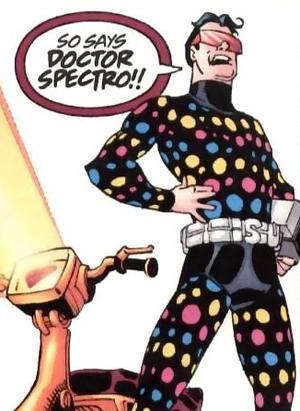 Here’s the thing about Doctor Spectro: I really feel like he has the potential to be really cool. Created in 1966 by Steve Ditko and Joe Gill, Doctor Spectro was – it doesn’t even matter, it was the 60s, there was some kind of prism machine and nuclear power, and, whatever; in the end, the Doctor gained the ability to control other people’s emotions through the power of prisms and colour and stuff. And, yeah, it made him evil too, okay, because comics.

But the ability to control someone’s emotions could be so wicked. Have you ever experienced what happens when your hormones mess with your emotions? It makes you c R a Z y T o W n. Doctor Spectro could mess with a lot of people, if he played his cards right.

Sadly for him, Spectro decided things would be a lot easier if he just wore rainbow spandex pants, and he has since become the laughingstock of the DC community. The Green Arrow folks make fun of Spectro’s outfit on the regular. What a waste.

Who do you hope to see take over during DC Villains Month? Let me know in the comments, or send me a Tweet @SamMaggs!