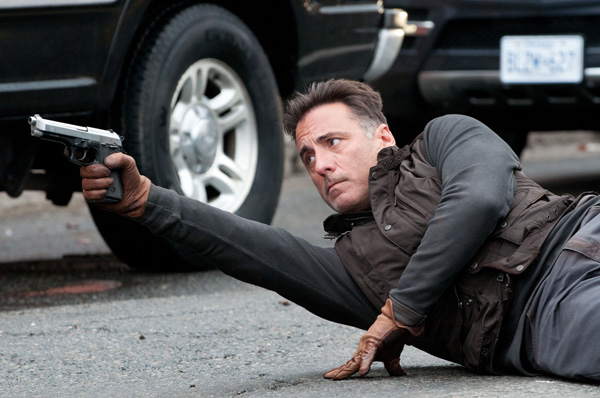 A Dark Truth is an important film… Or at least writer/director Damian Lee is convinced that’s the case and is prepared to slap his audience in the face repeatedly until they agree. I guess the one man Z-movie factory was watching Traffic or Syriana one night and decided, “hey, I can do that only cheaper, with desperate actors, and without all that boring social relevance and context.” So, he’s concocted a confused attempt at a globe-hopping multi-character political thriller based around the issue of the corporate seizure of natural resources in third world nations. There’s nothing wrong with that, it’s a worthy issue deserving of wide exposure. The problem is in the execution because he’s turned the concept into a smug, self-serving, low-level action movie that exploits its political cache and low-level star-wattage in an attempt to land something resembling a wide release. This is direct-to-DVD trash masquerading as a prestige picture, filled with the type of cartooney cigar-chomping evil businessmen who only Steven Seagal once had the guts to fight. The good news is that like all Damian Lee’s movies, it should at least disappear soon before he somehow cranks out another one of these gems with embarrassed former Hollywood stars.

Andy Garcia stars as a painfully serious former CIA agent with a dark past. These days he works as a talk radio host who spreads the real truth to the people, man. Somehow he’s a wealthy success off of the tiny late night call-in show that no one seems to listen to and he’s also got a stressed out wife and vaguely autistic son because… well, who knows? His story is intercut with Debra Unger’s uptight corporate type who grows a conscience once and assassin blows someone’s brains all over her face. You see there’s this super-powerful Toronto businessman (Kim Coats) who is supervising a billion dollar deal to control all of Africa’s water purification rights and that will immeasurably harm the people of that country while giving Coats bags of money to sit on as he waxes his supervillain mustache. At the same time the saintly Forrest Whitaker is in Ecuador getting his hands dirty by beating the crap out of people while trying to stop the deal and protect the interests of the people. Garcia was supposed to be out of this brand of international espionage since leaving the CIA, but the tragedy must stop and his half-dozen listeners would never forgive him for letting this all go down without a fight. With Unger’s financial backing and his wife’s naysaying, Garcia heads over to Ecuador and from there the movie turns into a shoot-out centric action movie with fights spreading from the jungle into the streets of Toronto. Oh yeah and Kevin Durand pops up as a shirtless assassin with a conscience named Tor…because why not?

So as you may have gathered, A Dark Truth is a pretty bad movie. It plays out like a low grade thriller made with a tax break, which wouldn’t be that egregiously wrong were it not for the fact that Damien Lee seems convinced that he’s made an important drama rather than genre trash. This is the man behind the giant rat horror movie Gnaw and Ski School, who has been making Canadian camp to stock shelves and clog Netflix cues for decades. There’s nothing wrong with that and his movies tend to have an enjoyably sleezy charm. But at least under normal circumstances he seems aware of the nonsense that he’s making. In A Dark Truth, Lee attempts to get serious even though the film is filled with the cardboard acting, laughably staged set pieces, and cornball TV movie writing that made him a VHS mogul. And don’t worry about missing out on the message. Garcia says all of Lee’s opinions with grating clarity before, after, and sometimes during the scenes that express them through drama. Few things are more irritating than schlock pretending to be art and this movie is one of the biggest offenders of that B-movie sin to come along in a while.

The saddest part of the movie is watching former Hollywood stars slum it through a project that everyone must have been aware wasn’t working. Garcia is visibly bored and tired, delivering every line in the same monotone while waiting for lunch. Whitaker has his patented gentle giant sad face on from start to finish and it feels like that’s directed at the film as much as his character’s predicament. Only Durand appears to be having any fun, but that’s because he’s allowed to play a stock B-movie character actually on the level of the nonsense surrounding him. There’s very little of interest or joy to be found here. It’s not even a movie that can’t be enjoyed for camp value given all of the genuine human suffering being exploited for cheep thrills. On the plus side, everyone on camera is visibly embarrassed and the film should quietly disappear without a fuss. If you want to see a film too rough for even the Razzie voters to get behind, by all means check out A Dark Truth. Otherwise, just ram your head into the fall a few times while looking at a 1995 issue of People magazine and listening to AM political talk radio. That will not only offer a similar experience, but you can enjoy it for free.