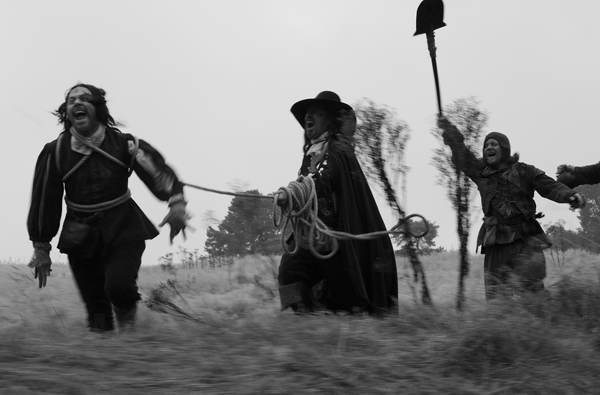 There’s absolutely no way that Ben Wheatley’s latest film A Field in England could ever be defined. It’s one of only a small handful of films that can adequately cover possibly every genre in film history and still find a way to dwell on the more bizarre genres. It all feels like a bit of a piss take for Wheatley, something fun to do with friends to see if he can get away with it, so while it isn’t up there with his last three vastly different features (Down Terrace, Kill List, and Sightseers) it still has certain degrees of comedic and artistic charm.

In the 17th century around the time of the English Civil War, four men desert the battlefield in hopes of simply taking a break and hitting up an alehouse. One of the men, a supplicant named Whitehead (Reece Shearsmith), has been tasked with locating a man who has stolen documents from his master and capturing him. They cross a nearly endless English field, get slipped a micky via some hallucinogenic mushrooms, and happen upon an evil Irish apothecary (Michael Smiley) who happens to be the man Whitehead was looking for. The evil man who might be the devil himself captures the men and puts them to work digging up an apparent buried treasure.

Blending a historical epic, early British horror, social commentary, costume drama, low brow comedy, 60s psychedelic, sketch comedy, action, and straight up avant-garde filmmaking, Wheatley and writer and frequent collaborator Amy Jump do a fairly remarkable job keeping the actual storyline coherent even when the tone and style are all over the map. The journey starts off pretty straightforward, but little by little, Wheatley throws in nods to everything from Nineteen Eighty-Four to giallo to 2001 and any number of other works designed to keep audiences off their core for 90 minutes. It gets stranger and stranger, building to a balls out 15 minute psychedelic freakout that almost puts Gaspar Noe and Kanye West to shame. (It’s definitely not a film for anyone prone to seizures, as warned by the film’s opening titles.)

Wheatley gets some great help from his cast, especially Shearsmith, the only sympathetic one of the bunch and thankfully the hero. Smiley makes for a great sneering foil, and Richard Glover and Peter Ferdinando get the lion’s share of the film’s big laughs as the two ignoramuses who simply want to get to the beer at the end of the trip. The cast and Wheatley’s eye for keeping everything on point provide the necessary grounding influence to work, even when the film’s stylistic choices are a bit of a head scratcher in certain parts.

Still, head scratching is part of the point here. It’s a gorgeous black and white disorientation meant to make people think they’re on their heels, when really they were bowled over onto their backs moments earlier. It’s a film that ups the stakes not only in terms of storytelling along the way, but also what the film itself is capable of. It makes things a bit uneven at times, but it’s a fun kind of uneven for people patient enough to stick with it. For those who can’t, they can always leave or realize it only lasts 90 minutes.