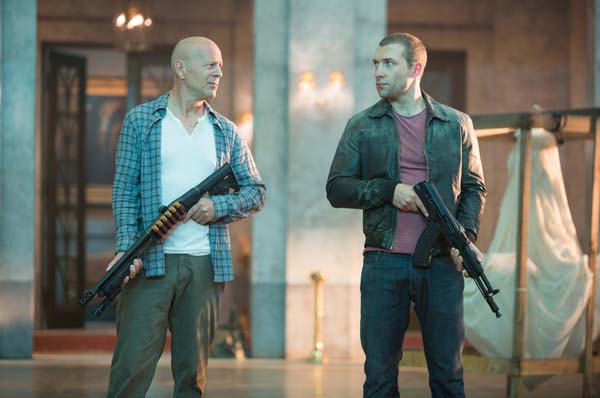 What the hell happened to John McClane? Back when the New Jersey working class hero stepped into the spotlight with no shoes, a gun, and a stack of one-liners, he was a nutshot to the reality to the steroid, cocaine, and ego-fueled world of 80s action movies. Here was a hero who could beat the bad guys while showing his sweat. Die Hard might be the greatest action movie ever made and back when it was a trilogy it was possibly the finest action movie franchise as well. Then Bruce Willis and company decided to come back in Live Free Or Die Hard and John McClane was suddenly taking out fighter jets on his own with an ease usually reserved for Schwarzenegger at his most ridiculous. Jumping the jet was McClane’s equivalent of jumping the shark and even if the folks behind that $100 million blockbuster thought they were necessarily updating the franchise for the comic book movie era, they still pissed in the face of what made the franchise popular. It was a hit though (way to go audiences!), so now McClane is back and more super-powered than ever. It would be nice to say that the film gave the Die Hard franchise the Star Trek rule of every other movie being good, but nope. This is essentially Live Free Or Die Hard 2 and the John McClane that we all fell in love with will never return. At least they can’t take our nostalgia away from us.

The last time we saw John McClane he was on an adventure to save his daughter because, well, Bruce Willis is older now so everyone involved thought kids just wouldn’t show up without some young folks sweating and shooting with him on the screen. Thankfully Justin Long’s wisecracking sidekick/Mac spokesman didn’t make a return, but this time the screenwriters decided to get crazy and have the burned out cop save his son instead. Within seconds of the film opening, McClane is dispatched to Russia where Jai Courtney’s John McClane Jr. (yep, the screenwriter couldn’t even be bothered to give the name any thought) is working as a CIA spy. Apparently the US and Russia are still mortal enemies and there’s a nuclear arms heist that the McClanes get themselves mixed up in that involves a whole bunch of bullets and explosions. There’s no real point in getting into specifics since the whole plot is convoluted and pointless, but there are bad guys and double crossings and one cat suit wearing sexy supermodel villainess (Yuliya Snigir) because…well, whatever. The important thing is that McClane is able to reconnect with his son while killing bad guys because we all go to Die Hard movies for the family values.

Now, on the bright side the movie at least tosses a bunch of big expensive Moscow action set pieces thrown up on the screen. Willis engages in a Grand Theft Auto style car chase within moments of getting off the plane in Russia (he finds his deep cover spy son instantly cause he’s got like magical father/son tracking powers or something). Cars pile up liberally, things blow up, and pulses pound. Other shootouts and helicopter daring-dos offer similar thrills throughout. If nothing else this is a premiere action blockbuster that piles up the type of carnage only blockbuster budgets can buy. Unfortunately the flick is also directed by John Moore (Max Payne, the remake of The Omen) who decided to shoot with irritating crash zoom shakycam so that you can never properly see what’s blowing up or where all of the heroes and villains are in relationship to eachother. That’s a real shame because more often than not you can tell as a viewer that good action is happening, but you just can’t see it. My guess is this stylistic choice was made to emphasize the fact that the movie can essentially be boiled down to the elevator pitch of “What if Jason Bourne was John McClane’s son?” But honestly, that idea is so dull and out of date, that it’s no excuse.

The other franchise travesty is the fact that McClane faces off against the most disposable villains of the entire series. One of the fundamental joys of the first Die Hard was that the working class hero faced off against the ridiculously charismatic Hans Gruber (Alan Rickman). He’s one of the great big screen baddies and as many people more talented and intelligent than myself have written before, a hero is only as good as the villain. Granted, no Die Hard sequel ever had another villain as good, but at least William Sadler, Jeremy Irons, and even Timothy Olyphant tried. Here none of the indistinguishable Russian villains make a mark, leaving all of the characterization to be carried by McClane and his boy.

Sadly, Jai Courtney is given nothing to do but complain about/to his father and fire guns. So nothing memorable there. That leaves Bruce Willis to carry the once character-driven action franchise and tragically this is not the same Bruce Willis from 20 years ago. While his twin turns in Looper and Moonrise Kingdom last year proved that Willis can still act when he wants to, A Good Day To Die Hard has the actor on cruise control. All he does is pull one of the five iconic Bruce smirks that Joseph Gordon Levitt mimicked so well in Looper and drop his character’s famous catch phrases hoping that the audience’s collective love of the iconic character will fill in the rest. It doesn’t work and viewers are stuck watching an overpriced star barely conceal the fact that he doesn’t want to be in the movie you just paid to watch.

Am I being too hard on A Good Day To Die Hard because of my unabashed love for the original movies? Probably, but if a studio is going to cash in on a classic series those comparisons have to be made. Despite what the title and studio want you to believe, this isn’t a Die Hard movie and nor is Live Free Or Die Hard for that matter. These are generic action scripts with John McClane and his catch phrases (for the record, yes Willis says “Yippie-kay-yay motherfucker” uncensored this time and no, it doesn’t make a difference because he sounds bored as shit saying it) slapped on to cash in on brand name loyalty. Whatever the franchise used to represent was lost somewhere in the third act of Die Hard With A Vengeance and it ain’t coming back. If you want to check out a nostalgic 80s action romp on the big screen this weekend, go catch The Last Stand before it’s unfairly and unceremoniously pulled from theaters. Don’t waste your time on this turkey. To quote the famous Die Hard 2 teaser, “how can the same thing keep happening to the same guy?” Because there’s money to be made, stupid!