I saw James Cameron’s Aliens first, only years later to be shocked and awed in a completely different way when I saw Ridley Scott’s precursor Alien. One of the greatest things about watching these films in reverse order is that after I saw Scott’s production, I not only came to realize and appreciate the different direction that Cameron took with his sequel Aliens, but also how little of the Alien universe is involved in Aliens. Seeing the place that these creatures who pose the ultimate threat to all of mankind come from, Ripley’s dealings with LV-426 and her life 57 years before her hypersleep, and the absolutely fascinating and unexplainable derelict space craft carrying these monsters was both revelatory and bewildering. Suddenly the well done, but still narrow, focus that Cameron’s Aliens thrives off of becomes something much grander and plays into a story far deeper and darker than I had ever imagined. Even more enchanting about this precursor is that from its very beginning, the stark visuals of Alien show that Scott was creating a centre of focus far different than Cameron’s ‘gun porn’/marines in space science fiction film. Essential to understanding Alien is comprehending the moment in which it was born. 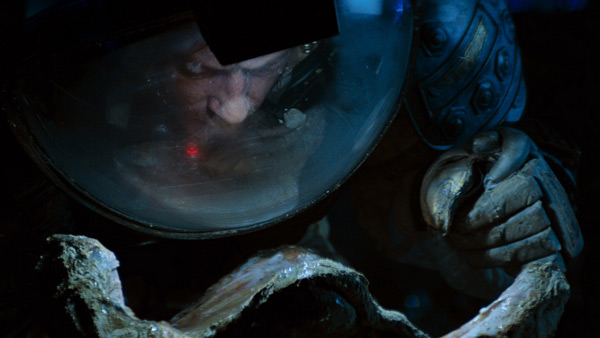 Let’s start in 1979, in space the final and well travelled frontier where more than a half century of science fiction films have made it very difficult for directors and script writers alike to produce new and ingenious visions of the future. George Méliès’ A Trip to the Moon (1902) is one of the oldest, and remarkably well known, films ever made – and it’s really no surprise that this early motion picture grounds itself firmly in science fiction genre. In its 14-minute running time, Méliès follows a group of astronomers who at the whim of the on-screen president decide to take a trip to the Moon in a bullet shaped capsule fired from a gigantic cannon and encounter wacky Martians on their journey. As incredible and outdated as Méliès’ idea of futuristic technology seems, it’s still very interesting to consider that more than half a century later the work of directors like Fred M. Wilcox (Forbidden Planet (1956)), Stanley Kubrick (2001: A Space Odyssey (1968)), and Ridley Scott show that the allure of imagining how humans figure into the grand scheme of the Universe hadn’t died.

Before we can speak about the absolute ingenuity that defines Scott’s Alien, its first essential to highlight the period in which the film was released. Although the Méliès managed to create one the most spectacular silent films ever made, their early start didn’t exactly secure the science fiction genre’s longevity in the film industry. For the many decades that would follow A Trip to the Moon, science fiction existed in the same on screen presence that horror cinema was confined to as well: the B-movies genre. We have to remember that before Kubrick’s 2001, science fiction films were typically low budget, poorly acted, filler pieces which were often outshone by the big studio films being pumped out. This is why Kubrick’s 2001, released only one year before man would actually walk on the Moon, was so integral to the development of the latter part of the 20th century’s science fiction film genre, and better yet, irrefutably important to Scott’s Alien. Released in 1968, Kubrick’s psychedelic space symphony 2001 was, at the time, the most realistic depiction of space travel that the world had ever seen. Using a cinema that had so long neglected tackling the immense and nearly inconceivable nature of our cosmos and the dark cocooning effects of space, Kubrick proved to the public and studios that many of the seemingly burnt out concepts of space travel and extra terrestrial life had yet to be adequately complemented and described using cinema. 2001 is also influential in reinvigorating an essential sci-fi trope long taken for granted: Artificial Intelligence. Where robots and machines have generally been seen as banal, menacing, yet still ultimately inferior, 2001’s HAL 9000 A.I. unit easily goes down as one of the most sinister movie villains all time.

HAL’s significance is important because never before had the public seen a machine created in the likes of a human mind that could be so calculating, so exact, and so damn smart. This is an important rapport that Scott picks up on in Alien, but now I’m getting ahead of myself.

Our next stop on sci-fi cinema memory lane comes in 1977, with the release of George Lucas’ space opera to rule all space operas, Star Wars: A New Hope. I’ll be honest, the plot of Star Wars has never particularly tantalized me, I mean space farmer boy joins rebel forces, almost falls in love with his twin sister, gets his hand cut off by his dad, and is trained in the Jedi arts by a kind of  creepy old dude who calls himself Obi Wan Kenobi. Okay, I’m being a bit harsh on the picture  (it is entertaining after all), but that’s because Star Wars has a lot less to do with its frankly less then revolutionary science fiction ideas, and more to do with its mythical box office proportions. Star Wars’ colossal box office success (that continues to increase every time Lucas decides to ‘remaster’ something) showed studios that there was a new wide spread interest for science fiction cinema and with this the potential for blockbuster results.

Okay, so what does this all have to do with Alien? Simple: the climate for science fiction film in 1979 drastically changed from over cast and cloudy to bright and beautiful and with this it was possible for a film like Alien to be made. Coming off the coat tails of his first major motion picture The Duelists (1977), Scott signed on to the sci-fi/horror film benchmark Alien, which was originally co-written by Dan O’Bannon (Dark Star) and Ronald Shusett (Total Recall). Although the script was graciously reworked by David Giler (The Money Pit) and Walter Hill (The Warriors), Alien’s premise (an alien creature terrorizing a small crew on a deep space voyage) doesn’t seem like anything different than what the Méliès wanted to show in 1902. However, Scott’s film took science fiction in a surprisingly new direction, and this is because it harnessed the vision and integrity that 2001 and Star Wars made popular, but added in a dash of horror to its concoction to make it something all of its own.

Although Scott has said that while 2001 and Star Wars greatly influenced his vision, another integral film was Tobe Hooper’s The Texas Chainsaw Massacre 1974. This macabre influence, teamed with nightmarish designs by Swedish conceptual artist H.R. Giger, give Alien a horrific atmosphere and the film’s opening sequence translates this dread perfectly. The eerie stillness of deep space and the ghostly, oddly shaped space craft that floats through it quickly reappopriates the genre, in probably the smartest move that Scott could have made to distance this science fiction film from anything that had come before. We’re told that the space craft, the Nostromo, which literally looks like a floating oil rig, is in fact a commercial towing vehicle and we are given details on its crew numbers, cargo, and course. All this seems quite standard, but this delivery of this information perfectly embodies the cold, strictly scientific malaise that acts as a foundation Alien’s torrid warning of the dangers of human curiosity. Although Scott has said he was greatly inspired by 2001, there is no doubt that once we enter the Nostromo’s dark and industrial innards, Alien dismantles the sleek, well lit, and frankly commercial look that films like 2001 and Star Wars made the futuristic norm. Instead, Scott places us on this industrial ship that looks like one giant engine – a place certainly less human friendly than the clean futuristic space spaces we’ve seen before.

It’s not long until we see the groggy crew awakened from a long hypersleep, and as they gather in the Nostromo’s mess hall it’s possible to notice an uncanny, yet completely authentic chemistry amongst the cast. Similarly to Cameron’s grunts, Captain Dallas (Tom Sekrritt), Warrant Officer Ripley (Sigourney Weaver), Chief Navigator Lambert (Veronica Cartwright), Engineers Brett (Harry Dean Stanton) and Parker (Yaphet Kotto), Executive Officer Kane (John Hurt), and the android Ash (Ian Holm) indeed have a connection. However, as Brett and Parker constantly quarrel with the rest of the crew about their pay and Ripley and Lambert’s relationship with the men seems quite tense, it becomes clear that unlike the  general camaraderie amongst the grunts in Aliens, the feeling which underline the Nostromo’s crew is outright tension. When the crew picks up on a undecipherable beacon from unknown craft on LV-426 (later revealed to be a warning signal), the real terror begins as the crew realize that they are nowhere close to home but in fact have been woken by the Nostromo’s Hal 9000 reminiscent A.I. unit Mother.

When Ash and other crew members remind those who don’t want to go down to LV-426 of Weyland-Yutani’s strict orders to investigate any sign of extraterrestrial intelligence or risk forfeiture of their pay, Alien begins to touch on one of its most unique aspects. The business of space: as the protocols and procedures that Ripley, Ash, and other crew members use to push their agendas removes the fantastical sense of space. Instead Alien beats it into our heads that although we are now in the seemingly limitless bounds of space, humans have already come to a point where their rules and regulations have invaded this infinite and seemingly ungovernable darkness.

And this all adds to one of Alien’s most central ideas: the sense of fearless curiosity that seems to be an innately human tendency, and crew member Kane knows all about this. When Dallas, Lambert, and Kane go to investigate the spacecraft, Scott gives us what could easily be some of the juiciest science fiction film footage ever recorded. Using grainier, and somehow more eerie P.O.V. cameras (a feature that Cameron no doubt monopolized on in Aliens), we see the search team come upon the baffling derelict spacecraft and enter its cavernous walls – everything that we could piece together in Aliens becomes that much more deep. Corridors covered in the nightmarish patterns of the xenomorph species, we come to see this alien ship almost as a living, breathing vessel- now dead and uninhabited for some spectral reason. Watching the film again, Kane’s overt curiosity may seem funny (he puts his face right inside of the alien egg), he’s unafraid of the cyclopean ‘space jockey’ who they find and unknowingly identify as a victim of the more deadly aliens, and is first to volunteer to go into the cavernous cargo hold that houses thousands of alien eggs. But this bravado is actually an important commentary, as Kane’s overt confidence accentuates the exact position of humans at this point: so comfortable with space travel that the unidentified no longer terrifies, but instead excites.

One of the best things about Alien, is that the alien isn’t the only malicious being on the ship: Ash proves to be quite dangerous himself. With a hidden agenda that sets the precedent for Burke’s sly motives in Aliens, Ash’s attack on Ripley may even be more terrifying than the alien’s itself. After discovering Ash’s ulterior programmed motives to bring back this biological weapon to end all biological weapons, Ripley is attacked by the now malfunctioning Ash – who can only be stopped when his head is smashed off. With some spectacular tension and bodily horror (Kane’s chest burster scene easily goes down as one of the most horrifying scenes in film), Alien leaps many of the tall boundaries imposed on science fiction film in a single bound. Still it’s Ripley’s survival the makes her the star and central focus of this innately sci-fi film, and as she struggles to battle the menacing creature, it’s clear why Ripley is the badass that she is in Aliens. She’s got an instinct for survival, but that doesn’t really become absolutely clear until the third installment of the Alien series arrives.