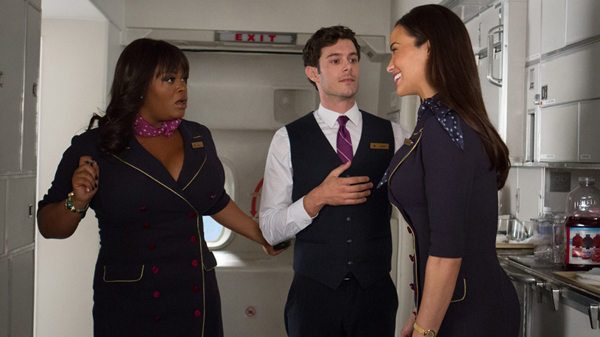 A jetlagged stream of rom-com clichés, Baggage Claim arrives at the theatrical gate like a plane that was lost somewhere over the Bermuda Triangle since 1991. It doesn’t seem like the kind of film that should be getting released in 2013, but rather something that should have been playing via a beat up 35mm print in the smallest theatre of the old Eaton Centre multiplex (for those not from Toronto reading this, trust me, that’s not a compliment). It’s bland, astoundingly shallow, backhandedly sexist, has maybe one or two good chuckles along the way, and is never once awful enough to even be truly memorable.

Montana Moore (Paula Patton) has always been the bridesmaid, but never the bride, and she’s about to repeat history for the wedding of her barely 21-year old little sister. Scared off not only by the multiple marriages of her mother (Jennifer Lewis), but also the globetrotting nature of her job as a flight attendant, Montana hasn’t dated in quite a while. But now feeling the pressure to settle down, she teams up with her co-workers – the sexy, big girl Gail (Jill Scott) and the basic effeminate Sam (Adam Brody) – to rig the system so Sam can potentially ensnare one of her former beaus to be her date to the wedding in 30 days time and potential future husband. Naturally, she also lives across the hall from the man she should have always been with (Derek Luke), who she’s known for decades and already has a girlfriend.

Adapting his own novel to the big screen, writer and director David E. Talbert (First Sunday) keeps the clichéd beat going so steadily that one can practically hear the metronome. There isn’t a single second of the film that can’t be figured out upon the moment one enters the theatre. And I guess for the positively undiscerning moviegoer who truly wants that truly unbelievable romantic fantasy it would be fine if the film around it wasn’t loaded with such a diabolical message about a woman needing a husband to survive and the film around it even having a clue about how to convey even the simplest of jokes.

Scenes in the film at times feel assembled out of order, and especially in the film’s second half sprint to bring Patton and Luke’s characters together it’s painfully obvious that massive swaths of the text have been excised almost at random. It’s tonally all over the place right from the start when we watch Montana find out the man of her dreams (that she just had ludicrously PG-13 rated Harlequin novel sex with moments earlier) was simply using her as his girl on the side. It lurches about between a Cinemax production, slapstick comedy involving people hiding out in trashcans, and painful “twist the knife in ever harder” dramatic beats within seconds to a point where nothing that comes after feels like it’s from the same film.

Montana only really has three interactions with her exes that matter, with one person even being introduced and talked about before never showing up again and the remainder glimpsed in a rapid fire montage that suggests someone important involved in the production just stopped caring at a certain point. She comes back into the life of a former lover, turned music mogul (Trey Songz), and one would think their five minute bit would set the tone for the episodic comedy to follow. Then Taye Diggs gets marginally more screen time as a bizarre, dog obsessed, sexist who wants Montana back only to act as a running mate to his current run for congress. Their segment yields higher returns (and a Ned Beatty cameo as a casual Republican racist), but it too is brushed off to lead into the aforementioned montage after only two of the dates. Then there’s a bit with the wealthy hotel owner she used to date (Djimon Hounsou), but he’s only even there to be in opposition to the real working man of her dreams. You know, the guy she has all those inside jokes with and who once had a crush on her in grade school?

At one point a character exclaims the movie’s M.O. that a woman needs a husband and not just a man, and the film never once breaks away from that conventional mode of thinking for more than one sequence before abandoning the idea that a woman can ever possibly be happy on her own. Admittedly it comes up during the film’s only really funny scene (mostly thanks to the reappearance of Diggs), but it just underlines how even if Montana ends up with her ideal, she’s still a shallow-hearted gold digger just looking for a man for the sake of having a man. It never makes the film’s supposedly adorable star-crossed romance even momentarily believable. Having every character cut each other down in sometimes surprisingly hateful ways doesn’t help matters much, either. Neither does the film’s clichéd visual choice that women have to be done up perfectly to seem attractive. It’s probably the only film since She’s All That to actually try to convince the audience that it’s leading woman wakes up gorgrously frumpy every morning with glasses and T-shirt on.

Patton, normally a fine actress, can do nothing but put on a thousand dollar smile and kind of fumble through the role. She’s given nothing useable from the script, so I guess she’s doing what she can. Luke is likeable, but his character is so intentionally bland for most of the film that he’s hard to warm up to. Lewis can only play into the absolute worst sterotypes that have to be mirrored by her daughter unwittingly pulling the same schtick. Brody is an embarrassment as the stereotypically fabulous gay best friend, but he does have good chemistry with Jill Scott, who stands out easily as the funniest and strongest worker out of all of them. Whenever Scott comes on screen it’s hard not to smile at the effort and gusto she brings when the rest of the film around her lets the cast down. Scott and Diggs own the movie. They don’t let the movie own them as everyone else clearly does. Even worse is how a big deal gets made of the other misfits working at the airport to help along this highly illegal and morally dubious enterprise, and then they’re never once given anything funny to do or appear in anything other than a montage. Why hire someone as talented of a comic as Affion Crockett as the overzealous security guard and then never give him the chance to be even remotely funny or even give him more than maybe 60 total seconds of screen time?

Maybe given more time than 95 minutes, Talbert could have come up with believable motivation beyond just having a strong working woman acting incredibly superficial, but if the characters would remain this cookie cutter and the plot so by the numbers. Baggage Claim is clearly damaged upon arrival, but it should have stayed misplaced in the bowels of the cinematic terminal it came from.