One of the most underrated filmmakers of his or any era, Hal Ashby was an artist defined by unique combination of cynicism and deep empathy. Ashby only had a decade in which he had enough success to make movies completely within his own vision, but thankfully that decade was the 70s. So he delivered a series of beautifully bizarre odes to the weird wonders of humanity in The Landlord, Harold And Maude, Shampoo, Bound For Glory, Coming Home, and Being There. That last film ended up being his final masterpiece and this week got a well-deserved Criterion Blu-ray that enshrines the movie as a classic. The film has slowly disappeared from discussions of great 70s movies as the years stretched on, yet just might hold up better than any of Ashby’s films other than Harold And Maude.

Peter Sellers stars as a truly unique character Chance. A childlike blank slate impossible to entirely pin down (especially given the beautifully mysterious final shot of the movie), Chance is both a fool and impossibly wise. He’s introduced living a withdrawn life in a mansion, where he does nothing but watch TV and garden. He never left the mansion where he was employed from childhood, but is forced to face the world early in the film after the owner dies. He wanders into the world unemployed, uneducated, confused, and fascinated by everything that he sees. After being hypnotised by the sight of himself on television through a security camera he backs onto the street and is accidently hit by a limo. The car belongs to a powerful billionaire (Melvyn Douglas) and his lost wife (Shirley MacLaine). They take him home to make sure he’s alright (and avoid a lawsuit), where Chance’s strange ramblings and responses to every question are misinterpreted as wise statements and metaphors. It’s all unintended of course, but that makes MacLaine fall hopelessly in love and causes Douglas to turn Chance into both a television personality and a politician. 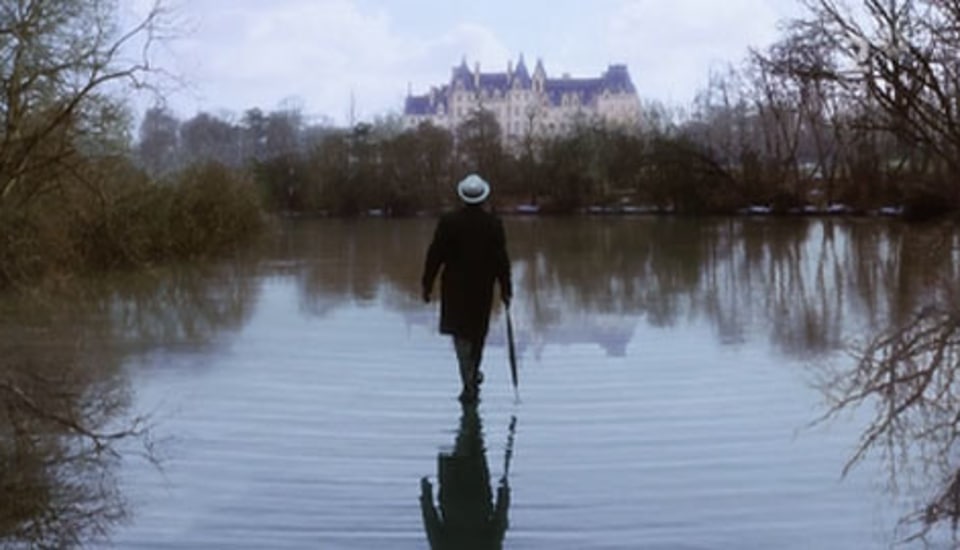 So it’s a bizarre story, but one that Ashby mines for rich character comedy and off-kilter social comedy. Chance’s bizarre rise in entertainment/political power is a timeless satirical commentary on how knowing the right people (and coming from the right race/class) can lead to limitless power as while as a snide reflection of how the masses are willing to put their own weight and import onto anyone who appears to be worthy of attention through celebrity. Clearly, these are themes that haven’t exactly gone away since 1979. If anything Ashby’s swan song might be more relevant now than ever. However, it’s also more complicated of a film than a mere political or social satire because Chance is a fascinating figure. A dummy raised on the idiot box he might be, but there’s also a charming innocence and sweetness to him that’s impossible to resist. He hasn’t yet been sullied by the absurd world that thrust him into the spotlight and as the beautifully enigmatic ending suggests, he might never be spoiled by the questionable motivations of others.

Complicated and mysterious though Being There might be, it’s also a wonderfully funny and entertaining film beyond all the thematic weight and symbolism. The script is hilarious, made even funnier by the way Ashby plays it slowly and in deadpan. It doesn’t look or feel like a comedy, which perversely makes it funnier and likely ensured more people took it seriously. The performances are extraordinary throughout (with Douglas deservingly nabbing an Oscar), but everyone pales in comparison to Sellers. The actor disappears into the role, yet it’s one defined by subtlety and silence in contrast to the boisterous slapstick comedy that made him so famous. There’s something so heartbreaking and magical about his childlike idiocy that suggests the way characters react to him is both ludicrously off base and perhaps onto something. It’s possibly the actor’s crowning achievement, a film that was a passion project for the performer and he clearly found an ideal partner in Hal Ashby. Together they made one of those rare movies that seems to get better and more nuanced with every viewing.

Re-watching Being There has never been better than on Criterion’s glorious Blu-ray.  The new 4K transfer beautifully recreates the unique texture of the movie, which plays with deep shadows in confining interiors and vibrant blinding light in exteriors. The balance is handled beautifully here, preserving rich details in either extreme. All of the carefully controlled compositions are filled with details and all of the small nuances of every performance are even more visible with this new clarity. The new master mono mix also beautifully captures the atmospheric score that quietly dominates the film as intended. Being There was already released on Blu-ray years ago by Warner Brothers, but this disc trumps that presentation in every possible way.

Obviously Criterion also beats the previous disc in the special features department. Unfortunately Illena Douglas’ delightful interview about the movie is absent (which is fair enough, given that she had nothing to do with it), but the deleted scenes, outtakes, and alternate ending from that disc pop up. New to this disc in an absolutely excellent documentary produced by the Criterion Collection featuring interviews with various members of the cast and crew that cover the unique nature of the story, Hal Ashby’s highly collaborative working methods, Peter Sellers’ method commitment, and various other elements of the film with love and detail (also giving screenwriter Robert C. Jones long overdue credit for writing the movie, which was previously only credited to novelist Jerzy Kosinski). There’s also an excellent 30 minute AFI Q&A with Ashby about the film that more than makes up for his absence in the doc and shows what a vibrant mind, sardonic sense of humour, and gleefully anti-authoritarian streak that he had.

Next up comes a collection of archival TV interviews, first from novelist Jezy Kosinski on the Dick Cavett show where he delves deep into his background and the intentions behind Being There for 20 minutes. Two ten minute talk show appearances from Peter Sellers pop up and while they are a bit more schlocky and celebrity obsessed in focus, Sellers does show off some hilarious impressions and offer some of his personal insights into Chance/Being There, so they are worthy additions. Toss in some trailers, TV Spots, and a bizarre – minute promo reel from Ashby and Sellers, and you’ve got an absolutely fantastic disc that treats Being There with the respect that it has long deserved. Being There film might only be remembered by the nerdiest of 70s cinephiles, but hopefully Criterion’s beautiful new disc will help expand the audience. This is a truly special and timeless comedy of human folly that deserves to be rediscovered by everyone with a sense of humour, a sense of cynicism, and a sense of wonder.