Like any self-respecting child of the ‘80s, I’ve spent too many hours thinking about which beloved movies and TV shows Hollywood should remake. I’ll come right out and say that a third Bill & Ted film never made my list.

I grew up loving the Bill & Ted movies, watching the cartoon show, and even playing the Nintendo game. And with all that Wyld Stallyns nostalgia floating around in my adult brain, I was okay with this franchise staying dead and buried. But now that Bill & Ted Face the Music is finally here, I’m glad that this wacky sci-fi comedy exists.

Back in 1989, two clueless high school bros named Bill S. Preston, Esq. (Alex Winter) and Ted “Theodore” Logan (Keanu Reeves) formed a rock band called the Wyld Stallyns. Bill and Ted were just another pair of airheads with big dreams until a time-traveller from the future informs them their music is destined to bring peace and harmony to the universe.

Flash forward to the present day, and Bill and Ted are now middle-aged men whose lives are going nowhere fast. Their daughters Thea (Samara Weaving) and Billie (Brigette Lundy-Paine) put their dads on a pedestal, but the rest of the world sees Bill and Ted as failed musicians. You see, they still haven’t fulfilled their destinies by writing that world-changing song, and their procrastination is throwing the universe out of whack. Literally.

Bill & Ted Face the Music is so damn silly that most people will find it charming or aggravating – there isn’t much middle ground. It has the feeling of an SNL sketch that is a great concept but goes on too long. There are some hilarious moments, but way too many scenes lack a sense of urgency and feel like dead weight.

Chris Matheson and Ed Solomon’s script doesn’t challenge Winter and Reeves to mine their characters for anything beyond their 30-year-old “cool dude schtick.” And that’s fine in spots, but it doesn’t take long for the joke to get repetitive. The best reboots and sequels bring back the characters you know and love while also giving them new dimensions.

Bill and Ted are the same two adorable himbos we last saw in 1991. I get that their failure to grow is a running gag, but Bill and Ted’s shallow characterizations still feel lazy. I find their lack of depth odd since beneath the surface of this fluffy comedy, Face the Music actually explores some thought-provoking themes. I’m intrigued by what this movie has to say about destiny, free will, and reaching one’s potential.

Instead of characterizing people by the body of their work, we often define them by what we expect them to one day achieve. Watching Face the Music filled me with questions like what’s the psychological toll of being labelled as the next big thing? The film made me think about how often we judge musicians, filmmakers, and athletes, not by how good they are but by how great we expect them to be. 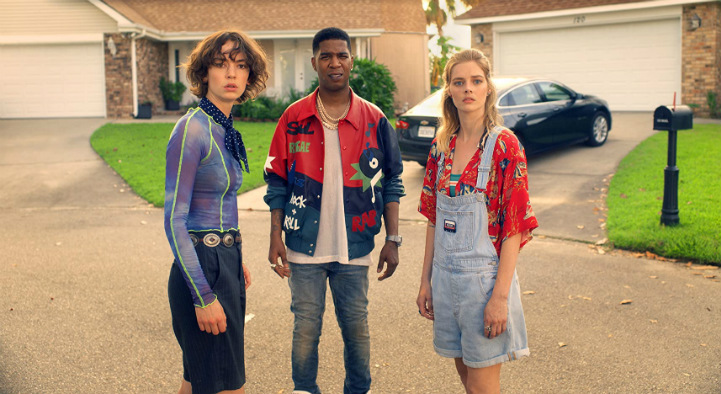 What would it do to your psyche if, like Bill and Ted, you caught a sneak peek at the best version of yourself? Would you commit to living your best life and spend every minute of the day chasing your dreams? Would you still be tempted to give up when facing a major setback? How many people would cheat the system to make up for their lack of potential, like Ethan Hawke in Gattica? I could think about these types of questions all day long. And I appreciate that a movie as absurd as Face the Music engaged me in such a meaningful way.

I love what Face the Music has to say about love, destiny, and fatherhood. I can’t say more without crossing into spoiler territory. Maybe it’s just the flaming dumpster fire that is 2020 catching up to me. Or perhaps I’m just a sentimental schmuck. But either way, there’s a moment late in the movie that smacked me with the feels.

Bill & Ted Face the Music is a light-hearted watch aimed at folks who grew up loving these two totally bodacious bros. Even though this absurd sci-fi comedy works about as often as it doesn’t, long-time fans should still be stoked to keep partying on with the Wyld Stallyns.