Back in the days when albums still existed and you couldn’t just make a playlist of tracks you wanted to hear from your favourite band over the internet, there were these things called Greatest Hits albums. Quite often they were filled with high points and past successes, but it was repetitive and redundant if you had the albums that featured these songs already.

If you are old enough to remember the idea of a greatest hits album, you’re old enough to remember who Michael Mann is: the auteur behind such wonderful films as Heat, The Insider, Thief, Collateral, and both the television and theatrical versions of Miami Vice. Blackhat is Mann’s greatest hits album, which is to say that it isn’t entirely unwatchable, but it’s shrug-worthy and relentlessly underwhelming. It’s an example of a talented filmmaker who’s giving the same effort he normally gives and not giving a damn if his audience has seen any of those before or that the film is remotely any good. It sure isn’t worthy of much praise, but it’s also not entirely open to a world of scorn and condemnation. That last part almost makes Blackhat that much harder to sit through because a somewhat decent movie threatens to break out every few minutes before Mann turns around to seemingly say to the audience “Hey, remember the time I did this one cool thing you really liked” instead of attempting something remotely original or worthwhile.

Following the intertwined takedown of a nuclear reactor in China and a running up of soy futures on the US commodities exchange, the US and Chinese governments have created a joint cybercrime task force to figure out why the events were linked and what the people responsible are ultimately building to. Much to the chagrin of US Special Agent Barrett (Viola Davis), Chinese Captain Dawai (Leehom Wang) has asked for the help of his former MIT roommate in aiding the investigation. Not only is Nicholas Hathaway (Chris Hemsworth) imprisoned for stealing over $40 million in a hack, but he was also Dawai’s former roommate at MIT, and the code used in the cyberattacks was created by the former confidants.

What ensues is a frenetic, location hopping Spy Vs. Unseen Spies thriller that can’t quite settle on a single tone. That’s not necessarily Mann’s fault, but more the shortcomings of first time screenwriter Morgan Davis Foehl’s material. The technobabble being spouted sounds credible, but the tonal shifts between whisper quiet back room dealings, bizarrely dubbed boardroom meetings, and the occasional deafening gun battle never gel. The film’s best moments are the quiet ones, with moments of political intrigue playing out like Mann doing a riff on his own work in The Insider.

Then again, some of the film’s few restrained action sequences are somewhat nifty. There’s a bombing and shootout that’s as intense and poetic as the downtown heist in Heat. A particularly nasty fight with some thugs in an LA Chinese restaurant recalls the grit and grime of Collateral. And yet, I’m really not sure if these are compliments because all these moments do is remind me that Mann has made better films.

Foehl and Mann can never seemingly agree if their film should be deathly serious, staid, and dour or dumb as a box of hammers. Mann previously walked this fine line nicely with his underrated Miami Vice reboot, but here he isn’t going by his own script and things aren’t as malleable. When you have a film where a character ludicrously searches for a Wi-fi signal like a water diviner after a thoughtful sequence where characters are trying to reason out what to do, the only main feeling is frustration. The film’s tonal shifts aren’t so much shocking as they are annoying. Any time the film gains any sort of momentum, Foehl’s screenplay finds ways of halting it. It starts and stops and starts and stops again and again and again.

A perfect example of the film’s aimlessness is a romantic subplot between Hathaway and Dawai’s sister (Wei Tang). At first, the relationship is an annoyance that kills the gamesmanship of the film’s admirably labyrinthine shell game of a plot. It appears for long stretches as if Tang has been given nothing to do except act as arm candy and a reason to have Hemsworth make out with her in a positively Mann-ian rooftop sex scene. Then, by the time the final third rolls around, Tang’s character has a distinct purpose, but the REST of the film has gone to a place so idiotic that one wishes the love story would just overtake the whole damn thing. 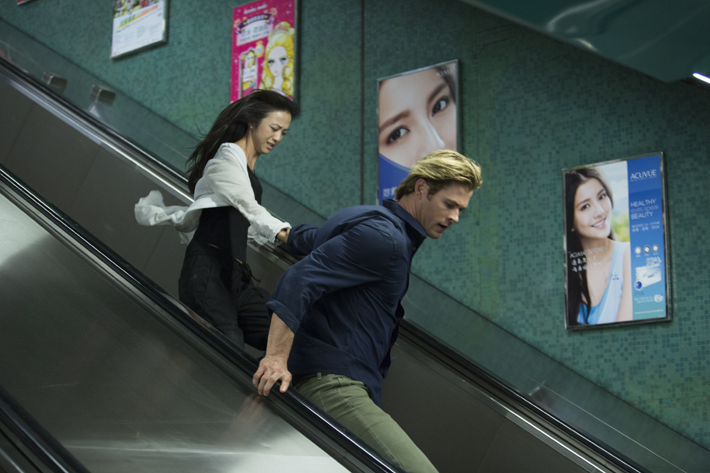 Then again, Hemsworth is also part of the problem. Even suspending the disbelief that someone who looks like he does could be a hacker (which is explained away in a pretty amusing sequence that I’m sure isn’t supposed to be as funny as it is), everything he does comes across as slightly off and out of place. He postures like a bodybuilder even when he’s sitting at a computer. He can’t play Hathaway’s more vulnerable contradictions, coming across as a man who doesn’t care if his sentence is commuted or not, begging the question why he’s even bothering. Worst of all, he has one of the worst accents in screen history, but not even memorable enough to stick with it. He keeps intoning this bizarre mush-mouthed impersonation of Sylvester Stallone that makes him sound like he’s having a stroke. That’s a low blow and I feel bad for being so flip, but the marbles in his mouth and the film’s piss poor sound mix make about a quarter of his dialogue unintelligible. It’s a horrid acting decision that should have been stopped immediately.

The real star of the film, and someone worthy of being singled out for their work, is Wang. In a more ambitious, less studio driven, and still directed by Mann world, the film would have centred entirely on his driven and determined cop. His quest for answers and dealings with Davis’ underwritten, but still well acted Fed are vastly more interesting than anything the blunt instrument at the centre of the piece does. In a better film (and one that ultimately doesn’t lead to the stupid conclusion this film does), Hathaway would be a peripheral character and Dawai would be the lead.

None of this matters, though. This is an auteur film that many auteurist critics seem to be eating up because it seems specifically designed for people who simultaneously want to watch an arthouse action film before going home to immerse themselves in academic texts on formalism. But Blackhat is piss-poor formalism. Without good material to sustain him, Mann becomes a hired gun left in charge of a wonky asylum. It’s a film chock full of visual clichés at a screenwriting level (people furiously typing, close-ups of text chats, 3D mock ups of what it looks like inside a computer) that’s made worse by the fact that Mann cares more about capturing a perfectly framed single tear running down someone’s stressed out face or a kid doing a handstand in an apartment building hallway being almost perfectly centred. He also makes damn sure to show the audience know that Hathaway has been reading Foucault in his jail cell. That’s what auteurist films do, but without any worthwhile material or themes to back it up, it’s hollow. It’s Mann in denial that his film actually doesn’t mean or stand for anything. If the dialogue already goes in one ear and out the other, Mann’s overcompensating inspires an equal and opposite reaction.

I suppose it isn’t Mann’s worst film overall (that’s still The Keep), but it’s certainly his least captivating. It isn’t thoroughly unwatchable, but it isn’t worthy of his talents and skills. Then again, without him the movie would probably be unbearable. If not for conjuring memories that he has made vastly better films, Blackhat would be a complete washout and waste of time. It’s relevant insomuch as I’m sure someone is making a case for its prescience following the Sony hack and current cybercrimes against French newspapers after the Charlie Hebdo tragedy, but even those are a stretch. Blackhat is lucky to even have anything said about it at all,