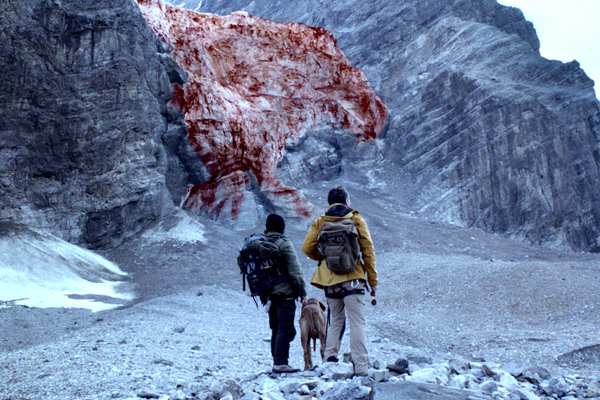 Having debuted under the much more appropriate title of The Station at TIFF last year, Blood Glacier is a strong, well paced, and low key Austrian creature feature with a title that does the film few favours.

At a climate observation station in the German Alps, a team of scientists prepare for a visit from the Environment Minister. They’re interrupted by a strange discovery from surly technician Janek (Gerhard Liebmann), who has been stationed up there longer than most people would ever care to be.  He finds a red liquid pouring from a nearby glacier that’s shrinking due to climate change. When the ‘glacier blood’ comes in contact with the local animal life, it causes fascinating changes that will eventually turn anything it touches into a monster. Janek and the team have their hands full defending themselves and the station against a growing horde of biological horrors and using every tool at their disposal to get out of there alive.

Despite a pretty stupid title that harkens to something that SyFy or The Asylum would produce, Blood Glacier maximizes its strengths despite some pretty obvious flaws. A creature feature in the spirit of The Thing, Blood Glacier manages to do a few things exceptionally well in order to make up for the moments when the filmmakers are handcuffed by budgetary constraints.  Director Marvin Kren shoots the hell out of this film, as the countryside and the scenic mountain vistas are breathtaking isolated backdrops for the horror that’s about to come.  The creature work is solid and reveals are refreshingly kept to a minimum, allowing tension to fester and the narrative to move at a decent clip without descending into overkill.

On the flipside this is a wealth of corny dialogue and ludicrously stupid situations that the characters sometimes find themselves that stretch the already generous leeway a creature feature normally gets.  The script’s flaws take can sometimes suck all the air out of the room no matter how good Kren and company are handling the rest of the film.

Gerhard Liebmann is a solid hero and the entire ensemble fills their roles well enough even though no one outside of Janek gets any actual characterization.  Even if the script doesn’t push any boundaries it gets the job done.