Child’s Play made its debut in 1988 and tells the story of a single mother who buys a popular toy doll (Chucky) for her son. But she picked the wrong kid’s toy. While evading the police, Charles Lee Ray, a serial killer with knowledge of the occult uses magic to possess that very toy doll. And after moderate box office success, the series pushed out four more sequels – Child’s Play 2 (1990), Child’s Play 3 (1991), Bride of Chucky (1998), and Seed of Chucky (2004).

Despite receiving the reboot treatment, the Child’s Play movies were never box office juggernauts. After adjusting ticket prices for inflation, the five entries in the series earned an average of about $50 million. But the Chucky character lives on in pop culture. There’s something about a murderous child’s toy that sticks in people’s mind. In 2019, horror fans mention Chucky in the same breath as Jason, Freddy, and Michael Myers.

I watched the films as a kid, and the scariest part of these flicks wasn’t the murderous doll. I was afraid of finding myself in the main character’s (Andy) shoes – metaphorically. Andy figures out that his toy doll is alive, and the adults in his life don’t believe him. We often forget how isolating childhood feels once we become adults. And the thought of confronting something terrible and being dismissed by the grownups in my life left me shook.

Based on the trailer, it looks like this new film will update the franchise’s formula. Technology and our desire to plug into everything seems essential to this reimagining. This version of Chucky is capable of tapping into your Wi-Fi devices, Skynet-style. Chilling! The film looks as bloody as you want your slasher flicks to be, and features plenty of creative kills, and jarring jump scares.

Even though I’m a life-long horror movie fan, I was never big on this series. But this trailer piqued my interest. And after factoring in the casting of Aubrey Plaza and Brian Tyree Henry, now I’m on the fence about giving this reboot a shot. 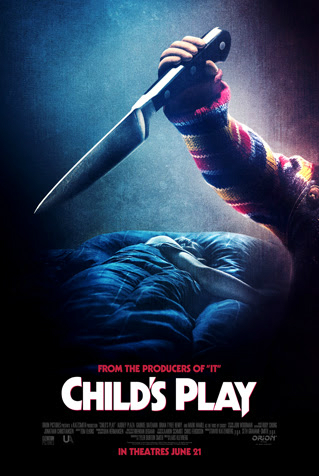