“Where I come from, ghosts are not to be taken lightly” -Thomas Sharpe

The most admirable element of Guillermo del Toro’s latest flight of fancy might not be the luscious visuals that seem to ooze off the screen, but the sincerity. Crimson Peak is a full-on Gothic Romance equally in love with both words. The film has ghosts and murders to be sure, but the gorgeous train set runs as much on heightened emotion and visceral reaction. Undoubtedly, there will be snickers from some viewers as del Toro unabashedly embraces the old genre’s cheese, yet for those willing to give themselves over to his full-blown fantasy, there’s immense pleasures to be found in the extremes.

Mia Wasikowska stars as Edith, a big-hearted waif of a heroine that the actress seems to have been physically constructed to inhabit. In a childhood prologue, she’s haunted by the ghost of her mother, which warns of the perils of a mysterious place known as “Crimson Peak”. In young adulthood, the would-be novelist attempts to sell a ghost story that she’s written and dodges all attempts at love until the charming Thomas Sharpe (Tom Hiddleston) pops up to lavish her with all his Hiddslestonian charms. Sure, he has a creepy sister (Jessica Chastain) who is clearly trouble from her first appearance, but Edith in love, dammit, and can’t resist!

Eventually, the untimely death of her questioning father shoves Edith into Sharpe’s arms and she sets off to live at his isolated estate in some unsettling moor. His massive mansion is crumbling and sinking into the ground, with all the heavy-handed metaphorical significance that implies. Sharpe is sincere and his sister darkly secretive, so trouble is afoot. Then there’s the other roommate, a ghostly one who appears at night with mysterious malevolence.

Crimson Peak is a film for those who read one of the iconic Gothic novels by either Bronte sister and felt frustrated by the fact that the vaguely supernatural atmosphere of dread never paid off with overt scares. Not so here, although the Gothic-foreboding-as-metaphor is played up to eleven. It’s almost comical how much symbolism and foreshadowing del Toro crams into every frame, but it’s entirely forgivable given that it qualifies as homage.  The director is of course one of the most obsessive genre geeks in Hollywood, and Crimson Peak feels like the filmmaker emptying out every influence and artifact from a certain section of his collection. In addition to all the literary homages, horror nerds will be satiated by direct references to films like The Changeling, Black Sabbath, Deep Red, The Innocents, The Haunting, and even del Toro’s own The Devil’s Backbone, along with countless others. The film is essentially a checklist of the history of gothic horror in addition to a painfully sincere retelling of an old genre.

The bulk of the movie favors subtle scares as del Toro masterfully constructs atmosphere. Costumes are lavish, sets cavernous, colors evocatively symbolic, and the supernatural threat creeps its way through the narrative and up the spine. The director’s use of Mario Bava-style garish lighting and rich primary colors is as beautiful as it is unsettling. While the filmmaker takes great joy in the power of the tease, he delivers plenty of grisly goods along the way, especially in the climax.

The cast all deliver performances as heightened as the cinematic style. They’re decked out in costumes that visibly communicate everything that needs to be known about their mental states in any specific scene and play emotions large and loud. Wasikowska grows from innocent to heroine as per usual, and Hiddleston serves up romance with something sinister always beneath the surface. They’re wonderful, yet it’s Chastain who steals the show. She has the showiest role and del Toro allows her to pitch her performance to the rafters from her introduction. It’s unlike anything the actress has done before, and she takes so much delight in the freedom and scale offered by the role that it’s hard not to be charmed by her wicked ways.

Above all else, Crimson Peak proves that melodrama need not be a dirty word. There’s very little about the film that’s subtle. Even the creeping sense of atmosphere and suspense is played as big as possible. However, del Toro’s sincerity and love for the history of these types of stories bleeds through every frame so strongly that you can’t help but admire his accomplishments. Perhaps it’s not too surprising that the film failed to take off as a big Halloween horror hit. For those only familiar with modern stabs at the genre, watching Crimson Peak can feel a bit jarring. The most extreme moments in the movie may provoke giggles, but it’s also difficult not to get lost in the sumptuous production. It’s definitely a risk to make something this sincere in an ironic age, but clearly worthwhile given the gorgeous results. Crimson Peak certainly isn’t a horror movie for everybody, but for those who appreciate a big literary metaphor as much as a gooey gore sequence, the viewing experience is nirvana. 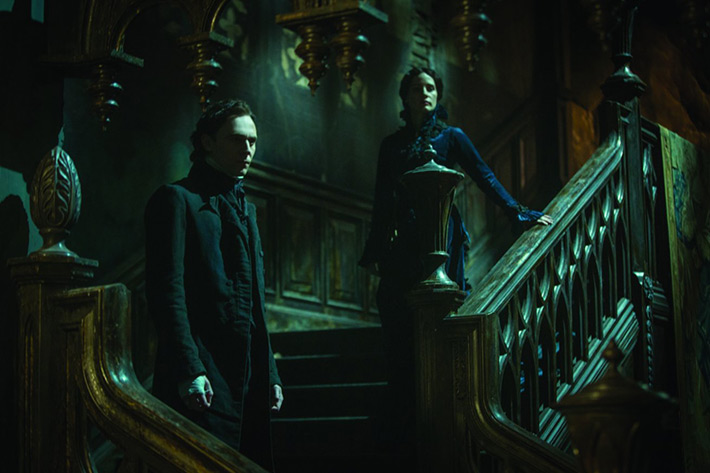 As I hoped before popping Crimson Peak into my player, the film looks ridiculously beautiful on Blu-ray. Del Toro’s meticulously constructed and beautifully rich color design explodes off the screen. It’s marvellous eye candy from the first frame to the last, so clear and with such depth that I’m certain new details in the design will register with every screening. Sound design is equally evocative, vividly backing up the filmmaker’s deep, dark buildings and cranking up the fear quotient when necessary. All of Guillermo del Toro’s movies tend to suit Blu-ray perfectly given their evocative colors, detailed designs, immersive cinematography and the crucial role all of them play in the storytelling. Crimson Peak is no exception. This is a stunning Blu-ray and honestly the film wouldn’t work nearly as well on a lesser format. It’s a showpiece disc. It might even be del Toro’s finest Blu-ray release yet, which if you’ve seen any of his discs before, you’ll know is rally saying something.

Guillermo del Toro is also a huge fan of special features, so this disc is no slouch. The film is so carefully designed to give almost every visual symbolic significance that the featurettes are almost a guide to understanding the depth of the film as much as they are ‘making of’ pieces. Each major location is given a featurette discussing it as a character with del Toro speaking with Mia Wasikowska, Jessica Chastain, and Tom Hiddleson about how the sets expressed their characters as well as how they worked within them, which are all fascinating. The director then provides viewers with a primer on the history of the gothic romance and how Crimson Peak falls into the literary tradition, before giving the lighting crew, production designers, costume designers, and effects artists their own featurette to discuss their design choices and how they specifically reflect the story. Each one of these docs is fascinating, revealing details that will make you want to watch the film again. The docs are an amazing reflection not just of all the effects and tricks that were pulled off, but how artistically significant those design choices can be to the final film. It’s almost a mini-film school, capped off by an audio commentary by del Toro himself. A motor mouth speaker with a deep understanding of his craft and a spikey sense of homour, Del Toro provides some of the best commentaries in the business. This disc is no exception. So, it’s a hell of a release.

Crimson Peak a good as major studio Blu-ray releases get. Simple as that. (So that’s an emphatic yes!)