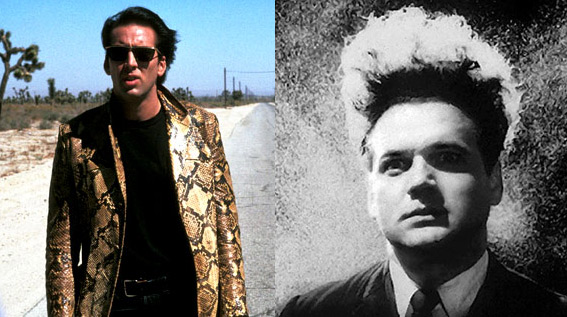 The Fox Theatre has a amazing Double Bill on Tuesday, April 28th, Wild At Heart and Eraserhead from director David Lynch.  If you’ve never seen a David Lynch film, these two flicks are an excellent starter pack.

As Lynch movies go, Wild At Heart could be considered a more mainstream entry into the his filmography, but like any film he’s made it’s wild and weird.  It’s like The Wizard of Oz on meth, with Elvis standing in for Judy Garland. The film also has the distinction of being from a period in Nicholas Cage‘s career when he was actually good, so for that fact alone it’s also worth watching.  Cage can be terrible, but when he’s on; like in Wild At Heart, he’s on. Wild At Heart is a road movie that just takes one bizarre turn after another.

After seeing the first film you may wonder how Lynch can top it, but Eraserhead is a much more strange film than Wild At Heart.  I guarantee that you will walk away from this film either disturbed or changed in some way—I know I did after my first viewing.  Eraserhead is absolutely mesmerizing in all of its weird silence; there is very little dialogue and many long shots of, for lack of a better term, some of the oddest and most troubling stuff ever put to film.  You’ll want to look away, but you won’t be able to.  The Fox owns a great original print of Eraserhead, and you won’t get to see it on 35mm anywhere else.

Lynch is known for giving viewers that subtle uncomfortable feeling in the pit of their stomachs.  The films aren’t overtly disturbing, but both Wild at Heart and Eraserhead get under your skin.  Lynch must be seen to be believed.

Check out the trailers for Wild At Heart and Eraserhead after the jump.