In 2009, director Neill Blomkamp exploded onto the movie scene with his knockout debut feature, District 9. District 9 is an unassailable classic. It’s a smart, thrilling, effects-driven sci-fi flick that wowed audiences on its way to a Best Picture nomination at the Oscars.

For a while Blomkamp looked like this generation’s next great genre film auteur. But his next two sci-fi projects, Elysium and Chappie, were ambitious disappointments that didn’t connect with viewers. Now the writer-director is back and swapping genres with his latest title, Demonic. This gruesome mystery-thriller still technically qualifies as sci-fi, but Demonic has both its feet planted in the horror genre.

Demonic stars Carly Pope as Carly, a middle-aged woman with a haunted past. When Carly was a teen, her mother, Angela (Nathalie Boltt), was sentenced to prison for a horrific killing spree. Carly moved far away and changed her name in order to leave the tragedy behind. But what kind of movie would this be if Carly’s past demons didn’t rear their ugly heads? Literally.

A mysterious research team contacts Carly about speaking with her critically ill mother using advanced mind-reading technology. Angela is now comatose and restricted to a hospital bed. But Carly can enter her thoughts by wearing a silly electronic hat and slipping into a relaxed state. She agrees to meeting for the sake of closure, hoping to give Angela one satisfying two-finger salute before saying her last goodbye. But once inside Angela’s head, Carly discovers something isn’t quite right.

Angela isn’t the unstable person Carly remembers, and she pleads for her to leave and never come back. There’s a supernatural force behind Angela’s misdeeds, and it’s seeking to escape her incapacitated body. By the time Carly returns to the real world, it’s already too late, and the evil entity begins praying on a new batch of victims.

Demonic’s premise sounds great on paper. It’s a mash-up between Nightmare on Elm Street and Inception. When you combine that setup with a first-class visual storyteller like Blomkamp, what can go wrong? A lot, apparently.

Demonic starts out like a rocket, but it’s not long before that rocket comes crashing back down to earth.

So what works? The movie delivers that bone-chilling vibe you want from any great horror flick. Before you know anything about the characters or their world, everything feels off. I had a sinking feeling in my gut right from the movie’s opening frames.

It all starts with the eerie way DP Byron Kopman’s camera slowly pushes in on its subjects as though it’s hunting them. It reminds me of how crocodiles float across the water, inching toward their prey, ready to pounce. Ola Strandh’s synthy, bass-heavy score sounds like a devilish lullaby. It’s creepy enough to give Trent Reznor bad dreams.

And finally, there’s a great set-piece halfway through the movie that showcases everything I want from a horror movie. It’s a disturbing, well-paced, and visually horrific moment of nightmare fuel that can hang with the best scenes from any decent horror movie. However, this one thrilling sequence doesn’t make up for the movie’s many failings.

Demonic’s issues begin with the script. Its shallow characters aren’t much more than exposition machines. They’re dull and lack personality – even by B-movie horror standards. Strong characters help movies mask their shortcomings. And Demonic’s biggest shortcoming is the way it yada yadas its intriguing mythology. It’s as though the story we get is a tiny sliver of a much more compelling world. 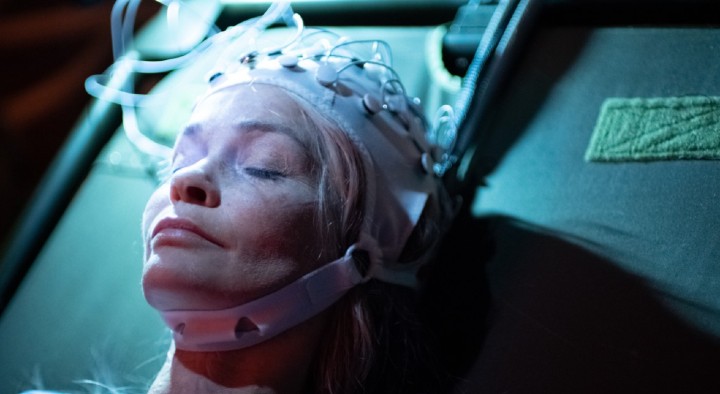 Here’s a minor spoiler: the film features a group of tatted-up Vatican exorcists who pack more heat than The Suicide Squad’s Bloodsport. Who doesn’t want to watch a movie with more of them? Blomkamp cares more about Carly’s forays into Angela’s mind, which looks like a cross between The Sims and the Amazon series Undone. It’s in these moments where the film should be at its best, throwing the heroine into a haunting dream reality where anything could happen. Sadly, these lifeless segments are a snooze.

What’s wild is how inconsequential this virtual reality component is to the whole story. Demonic isn’t saying anything profound through its inclusion of this plot device. Most of the story takes place in the real world, and you could swap the mind-reading technology with a psychic connection, and you would still have the exact same film. This sci-fi component feels superfluous.

The aspect of the story I find most intriguing is how it functions as a metaphor for mental illness and addiction. The way Carly perceives Angela is an example of how we conflate a person with their affliction.

In this case, Carly’s years of resentment towards Angela are misplaced. Angela was always the same decent person who raised Carly, but she succumbed to a force greater than she could handle. This example tells us that we’re often too quick to pass judgment on people without understanding the root of their behaviour. It’s like writing someone off as hard to deal with or unreliable because you don’t realize they struggle with depression or anxiety.

This atmospheric horror-mystery has a couple great moments, but they don’t make up for the flat characters, clunky writing, and poor pacing. Demonic is nowhere close to the worst horror movie I’ve watched this year, but given who’s at the helm, it is the most disappointing.

Next Article »
Beyond the Infinite Two Minutes Review