In my second instalment of Eisner Watch: Best New Series category, I’m here to talk about Rat Queens. Have you heard of Rat Queens? If not, you need to get out from that rock you’ve been living under and seek this thing out. The power of Betty commands you. Or at least I do, which is why I’m here to talk about it for the next 1,000 words or so. For me, Rat Queens was definitely one of my favourite comics this year, along with my previously reviewed and much adored Sex Criminals. But where Rat Queens stands out from the other nominations in this category is really quite unique, and sure to give the other books nominated in the Best New category a good run for their money.

Rat Queens: Sass and Sorcery, the first volume of an Image published comic by Kurtis J. Wiebe (writer of things like Peter Panzerfaust, Debris, and Green Wake) and Roc Upchurch (artist of Vescell), is another one of five nominated in the category of Best New Series, and a well deserved nomination. Upchurch’s beautifully diverse art is drop dead gorgeous alone, but the story with it? I never would have thought I could feel so compelled by a fantasy based comic. I love fantasy in my books and movies (The Hobbit and I have a long history together beginning at the age of nine), but comics were a different medium. So listen up Tolkien fans, pay close attention to this. My favourite description of the book is ‘Buffy meets Tank Girl in a Lord of the Rings world on crack’, and they’re absolutely right, but if that alone doesn’t appeal to you? Try this. It’s also a comic about four female mercenaries made of pure sass who love to drink, curse, and kill monsters for hire. These women are not to be trifled with. You have Hannah, the hostile, foul mouthed and yet somehow still loveable Elven Mage. Violet, the honourable yet fierce Dwarven warrior with hair kissed by fire. There’s Dee, the socially awkward atheist with some seriously kick ass healing powers. And then there’s Betty, the shrooms loving hobbit with a penchant for candy and sticky fingers.

The story opens up in the city of Palisade, current home to the Rat Queens as well as a few other marauding groups of trouble making mercs. The citizens of Palisade have had enough of the constant violence and disruption in the town that these groups are largely responsible for, and the people want them out. Given one last chance, the governing voices of the city hand out quests to all the merc groups in one final ultimatum. Complete these tasks, and they won’t be kicked out of the city. The Rat Queens set out on their mission, but what happens next is a series of unfortunate events that indicate someone might be setting them up to fail, or worse. Someone wants the mercs of Palisade dead, but the Rat Queens aren’t just going to take that lying down. It’s a high fantasy adventure shrouded in violence and conspiracy, and that’s not just the mushrooms Betty might have slipped into your candy dinner. What will the fate of the Rat Queens be and will the city of Palisade survive them, or more importantly, the trouble that comes with them?

For anyone who is not normally drawn to the fantasy genre, this might not be the best book for you, but I’d be willing to test that theory every single time. I’ve never played D&D in my life but I grew up on Lord of the Rings and other fantasy adventure based stories, so this new series was like a breath of fresh air to fourteen-year-old me. Now, there is a lot of underlying structure to it that might throw some people off without the proper knowledge. The “-4 Penalty to Initiative” and “+5 on attack rolls against dudes named Gary” chapter break downs before key battles went a little over my head until I looked them up in a D&D glossary, and what they’re doing is really smart. That was mainly the only place where I got stuck in my reading, but I have to acknowledge the other aspects of this book that might be a turn off for someone else. Again, this might not be the book for you if you don’t like a lot of violence or cursing in your comics. That being said, everyone should give this charmingly crude new series a try at least once, if you’re into that sort of thing. No pressure. 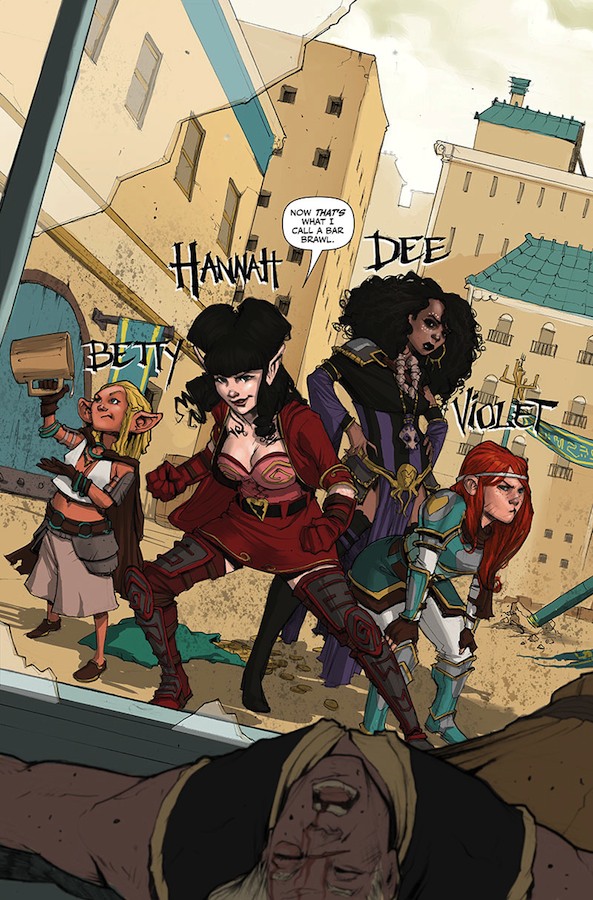 On the other side of the coin, for people looking for a new series to start that’s high fantasy adventure, awesome female characters kicking ass and taking body parts, with a lot of cursing? This is definitely a comic you should be reading. It’s ultra violent and funny, which is a combination I usually don’t associate as a pair, but with this comic it really works. Wiebe has a sharp wit that shows in his writing, while Upchurch’s art plunges the reader into a bright, magical fantasy world that still looks beautiful even when it’s covered in blood and guts. The story is raw and insane, hysterically unique in the web it spins and half way through the book I realized I wasn’t just actively being entertained, honest to gods I actually cared about these dysfunctional Rat Queens. This isn’t just a comic for shits and giggles, though it certainly is that. There is also an underlying story behind each female lead that’s both compelling and sympathetic, only leaving me scrambling to know more. These women spend their days starting bar fights and killing for money, but I’m here to tell you there’s a lot more to this story then just what you think you’re getting at face value. It’s an epic journey that’s only just begun.

This is only my second Eisner Watch review and I have many more fantastic books to talk about, but I think this comic stands a pretty good chance against the others, and not just because the Rat Queens would probably kill us all in our sleep. Rat Queens is a unique and quirky, but very realistic look at the fantasy genre as well as fandom in general, and some of the not so awesome stereotypes that come along with it. Seriously, what is it with men and tentacles? The cleverly instituted D&D structure and the emphasis placed on each person’s role in the group makes for a fun, semi-educational read, and the overall plot offers epically awesome troll battles as well as some valuable life lessons. Like always make sure your group has a functional healer, or you’re screwed. Also, maybe don’t let the Smidgen pack the lunch bags. And floating naked ladies always work for a nice distraction in a pinch, but it will never, ever make sense. In summary? Read Rat Queens!