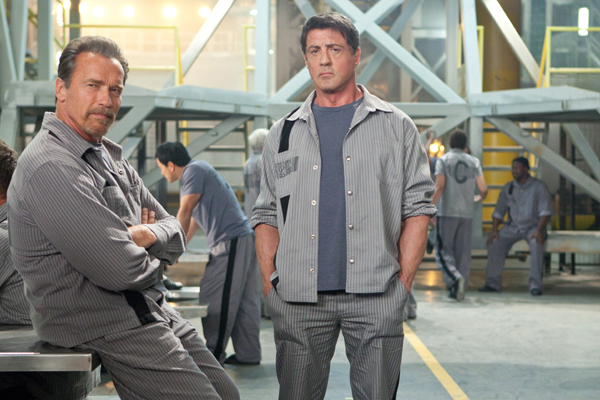 One third of the Sylvester Stallone/Arnold Schwarzenegger team up Escape Plan is a decent popcorn action flick. The other two thirds are fairly abysmal. Fortunately, the good section is the middle hour of the film, meaning it’s a perfect film to watch on TV right after you missed the opening 30 minutes and right before you have to take off to be somewhere. If one were starting to watch the latest film from Mikael Hafstrom (1408, The Rite) from the start, it might be hard to make it to the good part. And when it’s watched, there’s an exact moment that can be pinpointed when the movie and the audience will stop caring at roughly the same time.

Stallone takes the lead as Ray Breslin, the man who quite literally wrote the book on how to make high security prisons impossible to break out of. For years he’s worked at a security firm (headed up by an appropriately squirrely Vincent D’Onofrio) that places him into prisons, only to break out of them to point out flaws in the system. Ray gets approached with the prospect of heading to an off the grid, privately funded superprison, the location of which neither Ray, nor anyone on his team can know. With the promise of big money, he takes the job, but he quickly realizes he’s been set up by someone paying to keep him disappeared. He finds an accomplice in the quick witted Rottmayer (Schwarzenegger), and together they devise a plan to figure out their location and find out who’s responsible for the now unplanned incarceration.

There’s so much wrong with Escape Plan that it’s hard to tell where to begin, but there’s no better place than with Stallone himself. It’s hard to think of a movie where it looks like he would rather be somewhere else. Wearing a permanent scowl, devoid of any charisma, and seemingly sighing or sleepwalking through most of his scenes, Stallone’s performance borders on almost being disdainful. This had to be a project that Stallone took on simply to get something else made, and to the producers’ credit, they at least supported him with people who could carry the film around the star. It’s not that Sly isn’t getting physical, but that his character is so ridiculously ill defined (his only backstory coming just past the halfway point with a picture drawn by a child) that he seems to think that if the film isn’t making an effort, he shouldn’t really either.

So thankfully, the rest of the cast does what they can to bring things up a bit, and it actually in a few moments inspires sparks of life in Stallone’s performance. One can almost see the wheels turning when he’s on screen with Schwarzenegger (who takes 30 minutes to show up after a pointless opening breakout procedural that adds nothing) or Jim Caviezel’s deliciously over the top and business-like warden. Around his core team back home (D’Onofrio, right hand woman Amy Ryan, and inexplicable tech nerd 50 Cent), he seems beyond disinterested. But once in lock-up and being able to play against people genuinely trying to inject some fun into this thing, he briefly comes back to his senses and wakes up.

Schwarzenegger does most of the heavy lifting here, and his acting chops and penchant for humorous quips are welcome here like water in a desert. He occasional speaks in riddles, makes light of everything around him, and at one point creates a ridiculous diversion by shouting in German at Caviezel for absolutely no reason. In the later going, it’s kind of obvious that Arnie’s getting up there in age and he’s not doing a lot of the action stuff (which is even stranger because it’s obvious that Stallone is still mixing it up when he does precious little else), but at least this is a guy making an effort to give the audience the fun movie they probably paid for in the first place.

The other reason to watch if one feels so inclined is Caviezel. He’s having a ball playing the smartest, smarmiest guy in the room. He oozes oily charm that he sprinkles all over the scenery before chewing it nearly to death. This guy and Schwarzenegger totally understand what movie they are in. Even Sam Neil shows up as the ship’s doctor, and he gets it, too. But Neil has a role that’s one of the most wasted casting of good actors in awful roles ever. He’s a literal plot device that the movie forgets about entirely never to come back to after he’s served his purpose and only after one of the most ludicrously and unintentionally funny moments of on the nose screenwriting I think I have ever encountered.

Once Ray gets placed into lock up, the film becomes somewhat exciting. Watching Ray piece things together to try and escape works because Schwarzenegger and Caviezel are just that entertaining to be around. It’s also cool to see a film like (made by a bunch of super right wing Hollywood dudes) include a badass Muslim character (played by Faran Tahir) that clashes and helps with the heroic duo. There’s a cat and mouse element to everything going on that suggests the film might actually redeem itself. Even the actual twist as to the location of the prison (given up just past the halfway point) feels kind on inspired.

And then, once the action movie element kicks in, the film just throws up its hands and really stops caring about anything it was trying to do just because they need to end things. The mechanics of the prison and the breakout itself not only don’t make sense, but are insulting to think about because it all hinges on the prison guards (who all wear blacked out Destro masks) apparently never search prisioners in the most highly guarded secret prison in the world. And if it’s so off the books, why then would they remotely care about giving into the Geneva Convention and giving these guys rights, since everything they get are what they would get from average prison. And most importantly, if these are the worst of the worst and the prison isn’t technically affiliated with any government (which the film makes perfectly clear several times), who is paying for this and why don’t they just have people killed instead of leaving them there? It sounds cruel, but this is an awful lot of work for a really lacklustre effort.

There’s no way that anything in the final third of Escape Plan could happen at this prison, let along any prison. Breaking out of a daycare would seem just as easy since every prison employee, including Caviezel starts acting like an idiot almost simultaneously and the plan hatched by Ray just suddenly becomes “screw it, let’s just run for it.” There’s plenty of shootouts, hand to hand combat, and assorted other stuff that had one guy sitting near me hooting and hollering with delight at even the hint of an explosion or shooting, but not a single bit of it has been earned.  It also doesn’t help that Hafstrom really doesn’t know his way around chaotic action very well, most of it edited into near incoherence.

And good God, the film’s final twist – which is tied to an unseen character everyone is trying to find who has some computer code to do something or other to the world’s banking system – makes absolutely no sense. It’s wrapped up so arbitrarily and idiotically that Stallone actually sarcastically blurts out the line “I didn’t see THAT coming” with all the conviction that suggests he might have refused to do another take. Even worse the film keeps going for another five minutes where poor Ryan has to show back up to explain away everything the movie couldn’t be bothered to show so the whole thing makes sense.

There are moments within Escape Plan to like, but overall and even by cheesy action movie standards, this one’s a disappointment. It can never quite decide if it wants to be procedural, a prison set buddy cop movie, or an all out action extravaganza. It only ever really nails the middle part, but even then one half of the equation has to meet the other part way. Even if this had been made three decades ago when both stars were at the top of their game, it still wouldn’t have been very good, but it might have been slightly more forgiveable.