Have you heard the one about the bear, the bird and the bow?

I’m walking, crouched towards a small set of steel huts, my ATV parked at a beach nearby. I’ve tried to be stealthy, but I had just crashed my vehicle into a tree that is now on fire, its flames spreading across a patch of grass on the beach. Pulling out my binoculars, I scope out and tag the array of enemies occupying the encampment: a sniper, two shock troops and some regular grunts. And a bear. Sat conveniently in a cage of the middle of the camp, this large beast clearly means trouble for any humans that come near it.

I shoot the cage door and the bear lets out a roar, sprinting towards a drunken guard who should have been paying more attention. As the mammal mauls the drunk’s face off, I prepare my bow to release an arrow into the sniper behind him. Just as I let loose the shot, a large bird – a “cassowary” – leaps screeching from the jungle bushes and ravages him. The bird and bear proceed to make quick work of the other enemies. Jungle justice.

Far Cry 3 is a game of stories just like this: Explosions, knife fights, parachuting out of planes and hand-gliding onto stolen pirate ships – it’s an open-world game that maniacally chuckles at its own possibilities.

At the centre of the game is an antagonist as insane as this environment: the mohawked and tattooed Vaas, a villain who doesn’t feel dangerous because of his power — he’s not quite the island kingpin — but because of the endearingly twisted performance provided by his actor (Michael Mando). Vaas has kidnapped you, California rich kid called Jason Brody, along with your siblings and friends. It’s this familial tale of rescue and revenge that serves as the narrative thrust of Far Cry 3, and it’s one that’s effective enough to fuel my desire to complete the campaign, as unbelievable as its “from bro to hero” story gets at times. 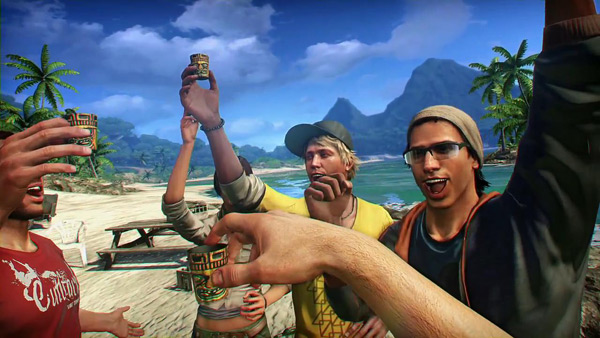 What’s most surprising about Far Cry 3 is its similarities to its immediate predecessor — a game that saw division between critical acclaim and popular opinion. This is a bona fide sequel both in style and substance, though a definite reboot in narrative. The formula and mechanics remain largely similar to Far Cry 2; you drive around a jungle world, going from mission to mission via waypoints, and set lots of things on fire. Much like how Assassin’s Creed 2 proved itself a masterful sequel by working in the same formula of the original game but overhauling our interactions with the gameworld, Far Cry 3 improves wholeheartedly on the open-world concept established by its flawed predecessor.

I’ll admit, the Assassin’s Creed series has coloured my experience of Far Cry 3, and I daresay its influence has been felt by Ubisoft’s developers here. Like Assassin’s Creed 3, there are towers to climb for navigational aid and animals to hunt for more economic purposes. Far Cry 3 does a better job of tying both to the core game experience.

In Assassin’s Creed 3 or the less recent Red Dead Redemption, hunting is a fun diversion and a way to make some quick cash; but it’s entirely optional based on the player’s discretion. In Far Cry 3, killing animals is the only way to upgrade your gear. It’s encouraging enough to make it feel central to the game, as strange as it can be to turn an island’s worth of fauna into bags and accessories (PETA, eat your heart out).

Unfortunately, the climbing and hunting mechanics are not particularly interesting. Far Cry 3 could have done a better job with tracking down animals. As it stands, you simply travel to the part of the map for your desired prey, look around, then shoot it. The game’s inspired stealth mechanics are left behind, and it’s all a bit basic.

Animals in Far Cry 3 are at their best when contributing to the manic nature of the island. In another instance of interspecies homicide, I found myself off-road in a Jeep and driving towards a herd of buffalo. An instant later, a gigantic tiger leapt at the slowest member of the herd — directly in the path of my vehicle — and the three of us collided in a fantastic manner, resulting in my Jeep somersaulting into a ravine. The amount of times Brody says, “Fuck, yeah!” in this game would be annoying if I weren’t already shouting it out myself. 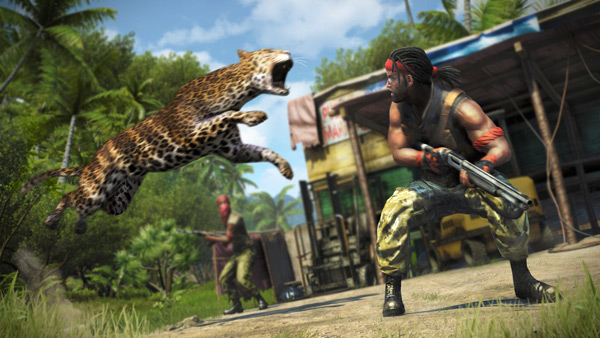 Meanwhile, the tower climbing sections feel like Mirror’s Edge if the protagonist forgot how to parkour. Ascending these hulking obelisks of rusty metal can be frustrating at best; with Brody at times unable to translate button-mashing into upward progress.

Such flaws would be glaring if these were the only activities offered up; fortunately, there’s much more to do. While all of island’s gameplay attractions offer familiar and formulaic variations on typical open-world missions — assassination contracts, territory takeovers, racing and hunting clubs — it does a better-than-average job at bringing them all into a rambunctiously cohesive experience. Importantly, the intrinsic rewards of completing these missions — special gear upgrades, weapon inventories, fast-travel locations — always makes them feel worthwhile.

The best of these missions are outpost assaults, where the game’s winning foundation of open-ended combat and stealth mechanics shine. Clear the base with your silenced sniper rifle? Tag the enemies on your HUD and knife them one at a time? Blow everything up with a grenade launcher? Much like Dishonored, Far Cry 3’s combat can be as calm and collected, or as crazily violent, as you want.

This base of solid gunplay makes for entertaining if forgettable multiplayer options, with a fun couch co-op mode and your typical team-based, online death matches complete with XP grinding and enclosed arenas. Multiplayer is all good fun, but it won’t be enough to distract the Halo and Call of Duty crowd away from their supply drops and attack dogs

The last big release of the year, Far Cry 3 could end up being many players’ Skyrim for the winter — if only it included more RPG mechanics to spur people towards completion. It’s big, with a massive map, 38 campaign missions and dozens of side-missions, together representing 30+ hours of play. As such, it’s a no-brainer purchase for shooter fans and open-world aficionados. Don’t expect the linear, tight adventure that Ubisoft’s trailers implied before the game’s release; Far Cry 3 is a noisy, wild cacophony of familiar open-world mechanics.

Falling short of the series’ aspirations of a Heart of Darkness tale of “western man gone tribal,” Far Cry 3 is a story best told by the players themselves, with an immersive and violent playground ripe for emergent narrative.