Free screening of Clue and Jurassic Park! - That Shelf Skip to main content 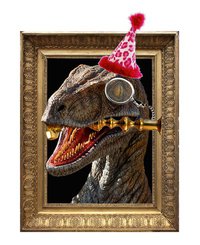 Ladies and Gentlemen, the Toronto Underground Cinema is celebrating our one year anniversary on May 15th. We’ve survived our first year, it’s taken a lot of blood sweat and beers, but we made it. So we’re going to celebrate the only way we know how… by showing movies!

Not just any movies, but two of our favourites, films that are near and dear to our hearts.

The first film we screened at the Underground cinema, so long ago that we can barely remember who the killer was. Who know if the film print even remembers… A hilarious slapstick comedy, with amazing performances, witty wordplay, and Christopher Lloyd and Tim Curry, together at last!
http://tinyurl.com/6bmurdd

DINOSAURS. This film is awesome. It’s fun, thriller and entertaining. it’s a perfect summer block buster, and it’s also very personal to the Underground gang. The three of us met while performing in a shadow cast of Jurassic Park in 2009, and became fast friends ever since. It’s our great pleasure is sharing this wonderful film with you all. Also, IT HAS DINOSAURS!!!
http://tinyurl.com/3ycnvy

Yes, this is a truly epic double bill, but we do epic double bills all the time, what makes this different? ITS FREE. you will not pay a single cent to see either film, it is our gift to you, our audiences, friends and fans, the wonderful people who have come out to shows at our theatre for the past year. We wanted to give something back. Since all we know is movies, we’re giving you that.

There will also be prize giveaways, a special video presentation, and some other cool stuff. You won’t want to miss this.

It’s Clue and Jurassic Park, on 35mm, on the big screen, FOR FREE.