Sharks have been B-cinema fixtures for decades, but they don’t turn up in video games as often as you’d think. When they do, the ocean’s apex predators tend to make an impression. In honor of Shark Week, here’s a list of five of the deadliest sharks in gaming.

As a kid afraid of dark water, whenever I went swimming I was convinced that there was something lurking just beneath the surface waiting to drag me to the depths of the ocean. Snacker is that fear made manifest. The omnipresent guardian of Treasure Trove Cove in Banjo-Kazooie, Snacker always knows when you’re in the vicinity. Given his determination to make Banjo his next meal, there’s never been a better incentive to stay out of the water.

I’m not kidding when I say that I was terrified of Snacker. Young children should not be made to brave shark-infested surf for the sake of a few collectibles.

I know he’s not technically a shark, but the odd husk of rusted metal sure looks like a mechanical shark and is at least deserving of a mention. I have no idea why Banjo-Kazooie was such a landmark game for sharks. There must have been something in the water.

Unlike the public’s fascination with the real Megalodon, the search for a gigantic prehistoric monster in Battlefield 4 actually yielded results. The mythic shark makes a brief but spectacular appearance on the Naval Strike DLC, leaping out of the water and crashing back down if enough players cluster around a specific buoy.

As is so often the case, the story is ultimately more impressive than the fish itself. The Megalodon was discovered after months of collective Internet sleuthing as fans grasped at the tiniest clues in hopes of unraveling a greater mystery. It speaks to our collective love of the unknown, and it’s always fun when our curiosity gets rewarded with such gargantuan vigor.

Though Flounder and Ariel’s escape from a shark makes for a memorable introduction in Disney’s The Little Mermaid, the second boss in the Sega Genesis spinoff was a far more fearsome creature. The battle takes place in a sunken ship, where a massive shark head periodically appears and spits a school of smaller sharks onto the screen.

The shark boss isn’t all that difficult thanks to a small alcove that served as a strategic choke point, but it does hearken back to a less inhibited era of design, when a shark could be made of more sharks instead of intestines. Disney’s shark boss didn’t have to swim through a fully rendered 3D aquarium with anatomically accurate animations. It just had to spew sharks and look cool doing it, biology be damned.

Kingdom Hearts is yet to top it, and that’s why the Genesis Little Mermaid is on the list. 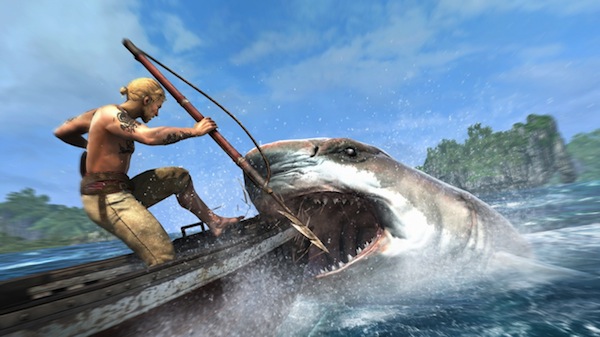 The fishing mini-game in the latest Assassin’s Creed title is the closest approximation of Jaws ever seen in a video game. Hunting Great White Sharks with harpoons from the prow of a rowboat seems like a fool’s endeavor, especially when the shark doubles back and bursts from the water to greet you with its teeth. Bigger boats were designed for just these kinds of situations.

Assassin’s Creed IV gets additional shark points for the deep-sea diving side missions. Unlike the fishing mini-game, the Diving Bell let you enter the shark’s native environment, making for more unpredictable and more thrilling encounters. Sharks may seem tame when viewed through the lens of the Discovery Channel, but wrestling with one at the bottom of the ocean reminds you that you’re little more than dinner.

Jumping the shark is one of the oldest memes on record and has an appropriately sacred place in the modern pop culture lexicon. But it can be downright tragic when the jumper doesn’t get the joke.

That’s more or less the case with Tony Hawk: Shred, where the once-proud franchise unknowingly commented on its own inevitable demise. The event occurs near the bottom of the Santorini run, when you soar over a small inlet just above the outstretched jaws of what appears to be a leaping Megalodon.

I think the scene is supposed to be a self-aware acknowledgement, a wink and a nudge to let fans know that there’s still a few spins left in Tony Hawk’s tired tread. And to be fair, the shark its weirdly frightening the first time you see it, mostly because it’s so unexpected. But announcing that you’re jumping the shark doesn’t negate the fact that that’s exactly what you’re doing, especially when it happens in a game as putrid as Tony Hawk: Shred.

The Santorini shark is the deadliest shark on the list because it’s the shark that killed a gaming icon. It’s too bad Activision didn’t learn its lesson.