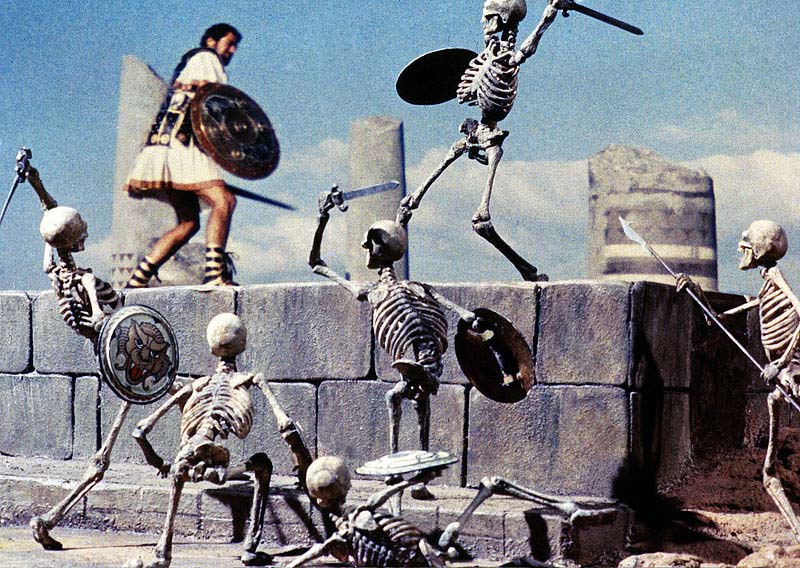 When I was 10 years old my mother introduced my brother and me to Ray Harryhausen.  We watched Jack the Giant Killer, The 7th Voyage of Sinbad, Jason and the Argonauts and other films featuring Harryhausen’s amazing stop-motion effects.  By this point in my life I was already well versed in the works of George Lucas and Steven Spielberg, but I had no idea of the connection between the Harryhausen films and the Lucas/Spielberg movies I so loved.  I became obsessed with stop-motion animation and special effects in general for a period in my youth. I would mold things out of clay, building massive models out of Lego and destroy them both respectively. Sadly, I never realized I could film any of my creations, nor did I have the means at my disposal to do so.  I watched uncounted hours of Movie Magic on the Discovery Channel; a show that gave viewers a behind the scenes look at the effects that went into Hollywood blockbusters of the early 90’s.

From watching Movie Magic I learned about the lineage of some of the great special effects pioneers, specifically those specializing in stop-motion effects. Thomas Edison, or more likely those he employed were some of the earliest stop motion pioneers.  Early stop motion techniques were present in Edison Company films as early as 1902!  Willis O’Brien, the man responsible for the stop motion effects in 1933’s King Kong got his start animating movies for Thomas Edison’s company.  O’Brien would in turn train and later collaborate with Ray Harryhausen, the man who inspired generations of filmmakers and effects artists.  One such filmmaker and artist was Phil Tippett, who after seeing The 7th Voyage of Sinbad as a child became determined to get into the special effects business.  Tippett would go on to do all of the stop motion effects in the Star Wars and Indiana Jones movies.  Directors like James Cameron, Steven Spielberg, George Lucas, Peter Jackson, Guillermo del Toro and Sam Raimi have all cited O’Brien and Harryhausen as influences and many eventually went on to employ Tippett on their films.  Even today stop motion is still used in film and television, most notably Robot Chicken and South Park.

Recently, I’ve once again become enamoured with stop motion animation.  Not just the creature effects of O’Brien, Harryhausen and Tippett, but the obscure and experimental uses of this effects technique as well.  Pinscreen animation, cut-out animation, puppet animation, etc. – there are so many ways in which stop motion effects can be used and employed.  I’ve assembled a list of some of the most important, impressive and interesting moments in the history of stop motion animation.

One of the earliest recorded uses of stop motion animation comes from this Edison Company Film.  The stop motion technique is used to speed up the appearance of the bakers dough sculpting.  Films like these would lay the foundations for later stop motion pioneers.

While this sequence wasn’t actually used in the final film, it did lay the foundations for the computer generated effects to come.  Phil Tippett was brought in by Steven Spielberg to test the feasibility of using stop-motion effects on Jurassic Park.  With this test footage Tippett(known for his stop-motion animation work in the Star Wars films, DragonSlayer, Robocop and *sigh* Howard the Duck) proved that the dinosaur effects could be pulled off using stop-motion techniques.  However, Spielberg would ultimately go with CG effects for the film.  Disheartened by the decision, Tippett would be quoted as saying, “I’ve just become extinct“—a line Spielberg would end up using in the film.  In the end though, Spielberg did use Phil Tippett’s expertise for Jurassic Park.  Using a digital input armature; similar to traditional stop-motion model armatures except plugged into a computer, Tippett animated or supervised the animation of numerous sequences in the film.  Jurassic Park represented something of a death knell for traditional stop-motion animation in major Hollywood productions.

The National Film Board of Canada was well known for its support of experimental animated films in the 1960’s and 70’s.  Pinscreen animation was one such experimental technique, it is a type of stop-motion that uses a screen filled with movable pins, that can be moved by pressing an object onto the screen.  Jacques Drouin’s Mindscape is just one incredible example of pinscreen animation.

Animated by Phil Tippett, the ED-209 robot from Paul Verhoeven’s dystopian sci-fi film RoboCop represented one of the last uses of pure stop motion effects in major Hollywood films.  After 1987, computer generated effects started to become cheaper, more viable and more believable.  Please note that the scene has been edited by a YouTube user to make it appear that ED-209 continues shooting Mr. Kenny’s corpse, the sequence actually ends at about 1:45.

Art Clokey’s precursor to the claymation classic Gumby was a student art film.  But it would lay the foundations for a whole claymation film industry that made everything from Wallace & Gromit, Clay Fighter and Davey & Goliath.

Heavy shades of Tim Burton’s future collaborations with Henry Selick can be seen in Vincent. Burton’s early film laid the foundation for The Nightmare Before Christmas years later. It should be noted that it was actually Selick and not Burton who directed Nightmare, but Burton is arguably one of the more interesting and influential filmmakers of the past 25 years, that fact alone makes Vincent signifcant;  but it’s also a fun short film to boot.

The effects in Starship Troopers were the ultimate extension of the digital armature technique Phil Tippett helped develop for Jurassic Park.  The animation for each bug was literally done by hand, moving one bit at a time in the traditional manner and entering the data into the computer. The result is a more tactile and realistic, which otherwise could only be achieved by using motion capture. Since there were no 8 foot tall sentient insects around, I can see why Tippett went this route.

If you were to ask any kid who grew up in the 80’s and early 90’s what came to mind when they thought of The Empire Strikes Back, they might very well have said Boba Fett.  They might also say, “Imperial Walkers!“.  The Battle of Hoth was probably one the most iconic scenes from the original Star Wars Trilogy, largely due to the amazing work of Phil Tippett and fellow ILM effects artist Dennis Muren.   Imperial Walkers at once amazed scared the hell out of me as a kid.  To this day I still have nightmares/awesome dreams about AT-AT’s… Thanks Phil!

Without a doubt, one of the most famous scenes in all of cinema, Kong’s summit of the Empire State Building with poor Ann Darrow in tow was created by American stop-motion pioneer Willis O’Brien. O’Brien’s work on King Kong inspired the next generation of stop-motion animators and special effects pioneers; O’Brien himself mentored a young Ray Harryhausen.  Harryhausen and O’Brien would eventually collaborate on another giant gorilla movie, Mighty Joe Young in 1949.

This one scene from Jason and the Argonauts more than anything else would inspire an entire generation of some todays greatest filmmakers.  Never before had animated monsters interacted with human actors so convincingly and so awesomely. This was 1963 and there were no computer effects, the time and effort required by all involved to make this scene work would have been astounding. The Argonauts fight against the seven skeleton warriors is the reason why Harryhausen is lauded as the effects genius he is. Truly incredible stuff.