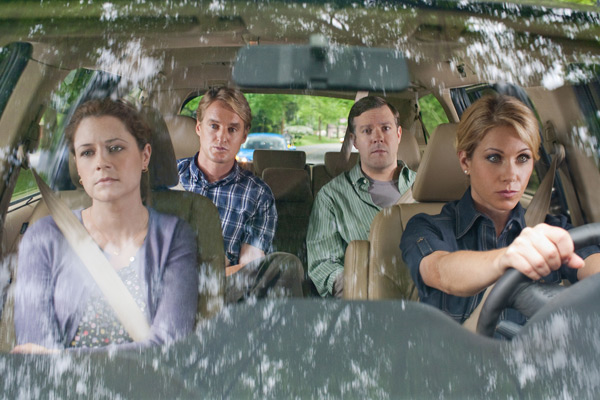 Owen Wilson and Jason Sudeikis star as Rick and Fred, a pair of married almost-40’s who can’t help but check out other women, even when their (uncommonly hot) wives are around. Though to give the two equal billing is unfair. Wilson is definitely the lead in this movie – the bland, unmotivated lead – while Sudeikis is unquestionably his stock horny sidekick. Early in the movie Wilson’s wife, Maggie (played by The Office’s Jenna Fischer) and Sudeikis’s wife, Grace (Christina Applegate, Married With Children) decide to give their husbands the titular hall pass – a one week vacation from marriage, where they are free to sleep with as many women as they want. Wackiness ensues.

I will admit, the premise of this movie contains some very interesting potential ideas, some of which they actually elect to explore. See, after nearly 20 years of marriage, Mitch and Rick have convinced themselves that the only thing stopping them from being knee-deep in ladies is their wedding bands and vows. They honestly believe that once they are let off the chain, they will have no problem scoring night after night. Confronting the inevitable sad reality of their situation gives the movie some well observed moments early on, as the men struggle to remember, precisely, “where da ladies at”.

Helping the movie’s chances at this point are a handful of strong supporting turns. Applegate has a real wit in her scenes, especially when poking holes in the elaborate façade that Sudeikis believes he has created to spare her feelings. Also watch for Farrelly Bros-regular Richard Jenkins (Six Feet Under) to inject some energy late in the game as the boys’ confirmed bachelor friend. The true secret weapon of this movie, however, is Stephen Merchant (Extras, The superior British Office). His eccentric delivery and commitment to earnestly playing the most ridiculous of Rick and Fred friends lets him handily steal every scene he is in – this is literally one of those “I wish the movie had been about this guy” roles. Look for a particularly inspired scene during the credits to see Merchant pretty much top the entire preceding 90 minutes in one fell swoop.

As this implies, the rest of the movie is pleasant, if forgettable. Owen Wilson is in full “Wes Anderson isn’t directing this so I’m not even going to try” mode. Sudeikis, a strong utility player on SNL, scores some solid laughs but still has yet to make good on his potential in a film role. I really want to like that guy, but I have yet to see him really surprise me or define his comic persona in anything. Add to that the fact that Jenna Fischer’s subtle comedic sensibility and completely underwritten character leave her stranded adrift whenever her character is on screen. As with many of the Farrelly Bros. recent movies, I find that they go so far out of their way to keep the characters likeable that they forget to make them interesting.

Casting aside, I feel like the real culprit here is the script, written by Pete Jones (original Project Greenlight winner) and rewritten by Kevin Barnett (The Heartbreak Kid… ugh) and the Farrellys. For a movie which promises to share some interesting and daring ideas about modern marriage, Hall Pass plays it safe at every turn. The third act clearly has no idea where to go, as evidenced by the abrupt turn into forced manic craziness, which then leads us to an even hastier conclusion. Even the patented Farrelly Bros. scenes involving bodily functions and (oh so much) poop feel like a boring afterthought. Oh, and can I please automatically get my money back from any movie that contains a “straight-laced guy eats pot brownies” scene? That’d be great.

I have to concede, the audience I saw it with frequently laughed – especially in one scene involving nude penises, where one woman in particular laughed harder than I’ve ever laughed at anything in my life. In some ways, I envy her. I myself also laughed regularly, but I was never once surprised by Hall Pass. This is bits and pieces from every “guys avoid their boring wives” comedy you’ve ever seen. In fact, if I’m going to keep watching the Farrelly Bros movies, and it’s been almost 20 years now, then maybe I’ll need a break. You know, to see some other movies, just to try the younger and different comedy that I’m missing. Like a week off. I wonder if there’s a name for that…