“The few mathematicians who could follow him might say his equations begin brilliantly and then decline, doomed by wishful thinking: Dr. Lecter wants time to reverse – no longer should increasing entropy mark the direction of time.”

Hannibal Lecter is haunted by the terrible nature of the universe. Time is always marching forward, and while he might be a god among long pigs, he is still subject to their tragic temporal rules. Every brutal action has a reaction, which in turn has its own effects and so on: the proverbial teacup that shatters into countless pieces and refuses to put itself together again. Hannibal drops a lot of teacups, and while the rules of causality hold true, the sad doctor has at least found a way to stop time, having failed to reverse its direction.

“Digestivo” brings to a close the Mason Verger plotline of Hannibal, which began in episode eight of season two. It is an hour long trip through a haunted house, delivering the show’s most graphic imagery and dialogue to date, while constantly keeping things stylish and surprising. If there weren’t six promising Red Dragon episodes remaining in this season, Hannibal could have ended here and been remembered as a masterful prequel to one of literature’s most beloved horror thrillers.But time marches on, thankfully, as much as the show’s eponymous villain would wish otherwise.

Mason Verger, Hannibal’s arch nemesis, has a similar time crisis on his hands, though it’s one of perverted craving rather than existential anguish. Having captured Will Graham and Hannibal Lecter with the liberal application of money and corrupt cops, Mason wants time to be parsed out in sadistic morsels as he tortures one to death while wearing the other’s surgically transplanted face.

In a vacuum, Mason’s plan might have worked, but by now so many teacups have been dropped that the shards are all mixed up. The pig farmer is too single minded, obsessed with the twisted poetry of his plan, to understand that at this point the only force that governs his world is chaos. 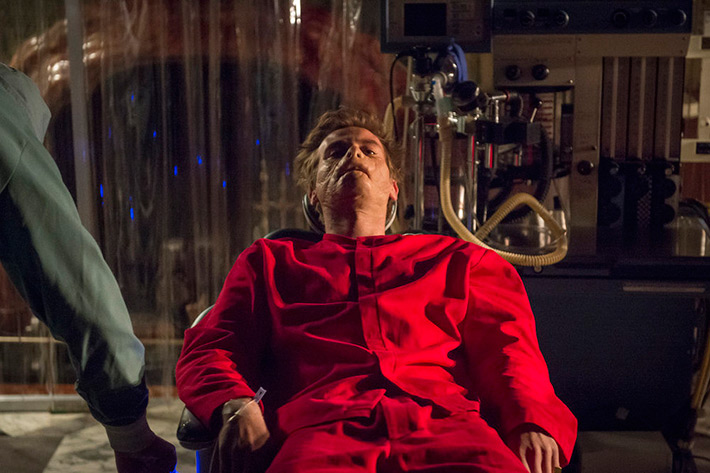 The episode starts with the first radical element that will bring down his plan: Hannibal’s guardian angel, Chiyo. Flashing back ever so slightly so that we can see the events that saved Will Graham’s cranium from being opened in last week’s “Dolce,” we see the Questura bounty hunters intervene. Will and Hannibal are spirited away to Maryland and Jack is left to be killed by lower level goons. Chiyo kills them all with her signature rifle and scope, rescuing Crawford in exchange for the Verger Estate address.

The second, and much more prominent element of chaos is right beneath what used to be Mason’s nose: his long suffering sister Margot, who he has abused for years and irreparably mutilated by surgically removing her uterus. Having found much needed sympathy in her new lover (and potential future baby mamma), Alana Bloom, Margot is the true protagonist of the Muskrat Farm arc despite its focus on Mason.

While Hannibal has its fair share of amazing women filling out its dramatis personae, Katharine Isabelle’s Margot Verger is special. By virtue of her primary conflict, Margot is not defined in relation to Hannibal Lecter like every other character on the show, but rather it is she who serves as the focal point of the House Verger plot. Isabelle deserves recognition for her ability to stand strong in the face of a sorry tradition in genre of men with remarkable gimmicks getting all the attention. She was our first point of access to this storyline, and she saw it through to the end holding her own in one of the series’s only moments of true justice and victory.

Of course, Hannibal Lecter, while in no way controlling or responsible for the actions of these two vectors of chaos, knows that they are elements in the equation. Unlike Mason, the proverbial bull in the china shoppe, Lecter is completely aware of all the cups he’s shattered in the world and therefore can see the whole conundrum as a fun game. What ensues, once the action moves to the bulk of the episode at Muskrat Farm, is equal parts delightful, horrific and unpredictable.

Upon arriving at the farm, Mason has his victims dressed and sat at his dinner table where he and Hannibal exchange villainous monologues. Lecter likens Verger’s plight to that of the biblical Jezebel whose face was also eaten by dogs. Mason responds by likening Will and Hannibal to the real life case of Armin Meiwes who was prosecuted in 2003 for eating a man who had agreed through correspondence to be consumed. Joe Anderson’s lipless delivery of “You go through all that trouble to eat a friend and you overcook his penis,” is the stuff of the best stories, striking a perfect balance between delight and dread.

Hannibal only experiences one half of that dichotomy though, playfully smiling at the descriptions of how he will be prepared by Cordell and fed to Mason. Never once does Mads Mikkelsen betray a note of fear, his performance contrasting with all the promises of Eli Roth-esque torture. He is stripped and branded, made to live like a pig, and then chaos comes to the rescue.

Margot visits Hannibal while Mason and Will are in the surgical wing reenacting Face-off with Cordell. Margot, on the verge of slipping back into the cycle of abuse with her brother, who has promised her a child, confides in her old therapist. Dr. Lecter reminds Margot that her brother will inevitably deny her what she wants and offers her Christ-like absolution from the sin she must undertake. If Margot kills her brother, Hannibal promises to take the credit by writing a letter describing the pleasure he took in the killing of Mason.

Alana enters, has Hannibal swear to save Will, and then asks the only truly important question of the Chesapeake Ripper she once loved: “Could I have ever understood you?” To which he replies a painful, “No.”

Cutting one of his arms free, Alana and Margot leave Hannibal to engineer his own escape. The rest is all fun and games.

Margot finds the surrogate that Mason promised her, and in true Verger fashion it’s a grotesque joke. He implanted her heir into the belly of a pig, presented to her under a mobile of little toy swine. The baby is dead. Meanwhile, Hannibal interrupts the surgery, murdering Cordell with a hammer and removing his face with a scalpel. Thanks to expert framing on behalf of director Adam Kane, the grisly operation appears to have been a success at first glance as we are made to believe the flayed skull on the operating table is Will Graham.

When Mason comes to, though, his nurse’s face is on his like a mask. His cries for help are answered by Margot and Alana, who harvested his sperm while he was anesthetized by stimulating his prostate with a cattle prod. Margot then pulls the trigger on the hidden Chekhov’s gun of the series, Mason’s pet brutal moray. She throws into the animal’s tank and it chows down on the soft flesh inside his mouth and throat.

Under the protection of Chiyo’s sharpshooting watch, Hannibal escapes the harm, carrying Will with him. The liberated cannibal takes his only friend home to Wolf Trap and tucks him into bed. As he sleeps, Hannibal works on his hopeful but doomed calculus, searching for the answer to all these teacup shards surrounding him. He absolves Chiyo, giving her closure, and when Will wakes up mentions that they share rooms in their memory palace.

Will has not come back together though, at least that’s what he claims. He denies Hannibal, who silently leaves, and when Jack Crawford and the FBI arrive Lecter surrenders with love:

“I want you to know exactly where I am, and where he can always find me.”

This is the end in the beginning. Mason Verger’s death signals the end of the canonical Hannibal Lecter narrative, and the capture of the Chesapeake Ripper is where it all starts. At the heart of everything is a beautiful relationship, one of the defining romances in all of television, but the blood of Hannibal is something more painful than love.

Bryan Fuller’s Hannibal is about what it’s like to be broken by a cruel world. It’s about the brutal indifference of time and God as we, the fragile things, have no choice but to break apart like the porcelain cup Abigail Hobbs once dropped on Hannibal Lecter’s hardwood floor. The lesson in “Digestivo” is that those who react to the violence of existence with violence of their own are doomed to succumb to the more shallow weakness of humanity, and while there’s no going back to try and fix what’s broken, you can surrender and meet the world with its own indifference, bringing time to a stop so the teacups stop falling.

Sibling Rivalry – In the Hannibal the novel, Margot Verger does all the important killing as Muskrat Farm. She kills Cordell with the hammer and feeds Mason to the eel. The primary difference is that the Margot of the books is addicted to steroids, so she has the strength to pull the moray from its tank and shove it down her brother’s throat while he lays in bed.

Getting it Right – Margot is an integral part of the Hannibal Lecter mythology, and the show has done her incredible justice. Ridley Scott’s film adaptation completely omits Margot, having Mason (played by Gary Oldman) eaten by his pigs instead of his eel. Hooray for revisionism!

Trolling – Mason’s slanderous campaign against Jack Crawford intended to give him leverage in the case of an FBI investigation into his actions is inspired by the deranged millionaire’s treatment of Clarice Starling in the books. The difference is that Verger manages to successfully defame Clarice, but in the show he dies before we see it having any effect on Jack.

String Theory – The book of equations we see Hannibal working on at Will’s bedside is in reference to the quote at the top of this article. In the book, Dr. Lecter waits by Clarice Starling’s bed after the two have escaped Muskrat Farm. His intention is to find someone to replace Mischa, whose death he dearly regrets. This is a bit of over explanation in the book that over-humanizes Hannibal by offering direct answers. The show’s subtle handling of this material is lyrical, finding the heartbreaking metaphor at the image’s core, and leaving it at that.

The Great Red Dragon – With Hannibal in custody we can finally behold Will Graham’s greatest adversary: Francis Dolarhyde. At San Diego Comic Con last weekend NBC launched a trailer for the final half of season three. You should all go watch it and get very excited for Hannibal’s  concluding arc which starts next week.