Ironclad: Battle for Blood (Jonathan English, 2014) – The plot of Ironclad: Battle for Blood takes place after the events of the original film, as people slaughter each other in poorly staged action sequences that we just don’t care about. It’s one of those sequels that should never have existed in the first place. Does anyone even remember the first film? At any rate, this one somehow manages to be even more forgettable.

One year after the great siege of Rochester Castle, one of the few survivors now a young sword for hire named Guy (Tom Austen) is wracked with guilt of the atrocities that he commited that fateful day.  When his cousin Hubert (Tom Rhys Harries) tracks him down to gather up mercenaries to protect their family castle from a dangerous band of Celtic marauders, he is forced to confront his past and his feelings for his beautiful cousin Blanche (Roxanne McKee) and finally fight for a cause the he believes in.

Hardly anybody saw the first Ironclad in North America, which is too bad since was a half decent little blood, guts and swords kind of story. It was forgettable, but at least there was some glee to be had in moderate doses. Ironclad: Battle for Blood finds NONE of the original cast returns, and is just a banal and dull attempt that can’t even be bothered to connect to any of the events in the film. 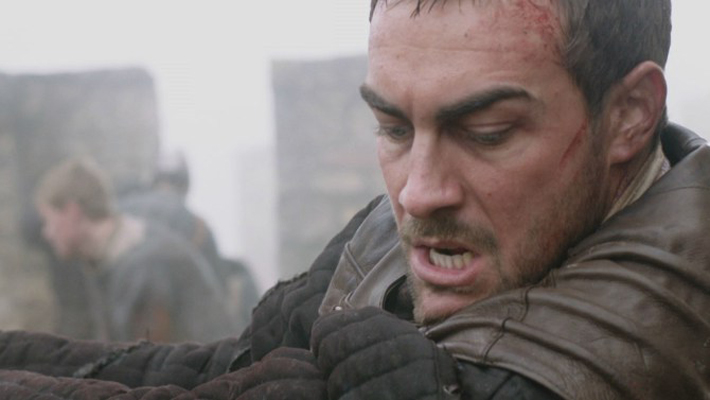 Co-writer and Director Jonathan English continues his previous story, but the budgetary constrictions and hasty assembly here reeks of a deal that required him to do this in order to get some other project funded.  The script is weak, the dialogue is even worse, and the action sequences are overly edited, making it all feel horribly disjointed. It’s a cavalcade of characters interacting with each other in a variety of ways that are supposed to appear profound or emotional, but are flat out dull and tiresome to watch.

Basically, it’s filled with minor players who aren’t busy on their off days while shooting Game of Thrones,  or actors who couldn’t get on the show at all. The only familiar face in this one is Michelle Fairley, who plays Joan de Vesci and was great in the recent 24: Live Another Day.  She even tries hard, but her character is so flat and cloying attempt to she comes across as desperate.  The cast has nothing to do, and when a story is full of empty violence and shocks it feels like overcompensation. There’s no method to any of this madness. You just don’t give a shit.

No one will give a damn about this and no matter the format – DVD, Blu-Ray, Digital Download or VOD -it’s a waste of space.