This year’s Hot Docs Canadian International Documentary Festival kicks off tomorrow and runs through May 8. For nearly twenty years Hot Docs has showcased the best in documentary film from around the world, and 2011 is no different. Featuring over 200 films in total, picking which films are worth seeing is a tall order for even the most seasoned fest-vet.

With that in mind, allow us to present the first part of our Hot Docs coverage – A selection of documentaries that may just pique your interest. Be sure to check back over the next week or so for our full reviews.

Ralph Zavadil is is a man who lives on impulses. It’s an subconscious force we all juggle with but for Zavadil his method has taken a life all it’s own. A literal persona, Cap’n Video predates Jackass, Dudesons and even Tom Green, it turns out that the roots of absurd, intense televised shenanigans were planted in St. Catherines of all places. The Cap’n would document spur of the moment stunts around his neighborhood, some with greater success than others, one in particular leaving him with a broken neck and global infamy. Beauty Day looks at a man after that, a man who had an early fallout with conformity, living with a storage room full of tapes and a wardrobe full of clothes that remind you of Pogs, who’s documented so much of his life on video and is ready to do it all again in a heartbeat. – Zack Kotzer

Who Took the Bomp? Le Tigre on Tour

Named after the first line sung on the debut, self-titled album, Who Took the Bomp? follows NYC trio Le Tigre in 2004 into 2005 while they tour for their third album, This Island, through four continents and 10 countries. The band (who have been on hiatus since 2007) known for their LGBT and feminist rights activism is Kathleen Hanna, Johanna Fateman and JD Samson. They asked a friend to capture the tour and what we get is a mixed bag of backstage hilarity, notable performances and a lot of commentary on issues through interesting interviews with the band members. We’re shown the warm relationships between the three women through quirky on-stage dance moves, a funny fake work-out video, hotel banter and times when they meet uber-masculine bands Slipknot and Hatebreed. The performances are stitched together from numerous shows, making for interesting viewpoints and illustrating how on their game they were. What starts out as a simple look into touring turns into tackling issues of homophobia, fandom, riot grrrl history and feminism, showing how strong Hanna, Fateman and Samson are and the backgrounds they come from. If you’re not familiar with the group, you’ll be a fan after watching this documentary. – Jessica Lewis

See a clip from Who Took the Bomp? Le Tigre on Tour here.

No stranger to the festival circuit of the last year, this documentary delves into the mind of the melancholy Swedish-Argentinan acoustic guitarist Jose Gonzalez. The beautiful film lets us watch him as he records his 2007 album In Our Nature, tours the world and contemplates his life and way of living. Not your ordinary music documentary, it dabbles in animating his family history and brainstorms, as well as fictionalizing certain events in his life. Most of the film has subtitles as Gonzalez usually speaks in Swedish or Spanish. The most fascinating parts of the film are when he seems to be quietly thinking to himself, usually about science or his work ethics. “Hello, hello. Sometimes I wonder why I’m so slow. Why does it take me forever to write a song?” or “What happens to your brain when you play melancholy songs all the time?” What may read here as oh-god-that-sounds-emo is heart-wrenching as Gonzalez explains how he tries to battle his inner critic. For a talented musician who seems to enjoy staying away from the spotlight, this documentary lets his dedicated fans and interested viewers in on new territory. – Jessica Lewis

See the trailer for The Extraordinary Ordinary Life of Jose Gonzalez here.

Prepare to have your heartstrings tugged by the Dazl Diamonds, a boys cheerleading team from South Leeds, UK. The BBC documentary focuses on the team’s road to the national cheerleading championships (where they compete against 13 girls teams) and the struggles of a few of the team’s members with their families or school. Disappointingly, the documentary doesn’t show us the school’s reaction to a team of young boys cheerleading or delve very deep into how the boys feel about it. It’s great to see that things are more progressive, but admittedly this could be a huge pull into watching the documentary, and it falls short. Even so, seeing the boys work through their speed bumps is powerful, especially with the pushes from their wound-up but dedicated coach Ian Rodley. Harvey is the shining star – “I’m getting the feeling I’m becoming Billy Elliott” – and his team, coach and mother (the latter begrudgingly) see it as they help him in the path of his goal to be a dancer. The mothers of the three boys showcased are film gold as well, as they were once troubled young women, even in jail, but they’re very emotional about their boys having a better future, pom poms and all. – Jessica Lewis

While Batman and Spider-Man have lived promising lives as vigilantes, crime and punishment in the real world tends to be a bit more complicated than simply stopping the bad guy. Nevermind in masks and capes. But that hasn’t discouraged a series of individuals across America from taking up the mantle of costumed crime fighter, taking to the streets in theatrical uniform to end evil in the forms that they see fit. With a myriad of methods and an even vaster range of delusion, these self-branded heroes seek to snuff out misery even if it means smudging the law themselves. Or drinking beer out of the back of their van while posing for pictures. – Zack Kotzer

See the trailer for Superheroes here. 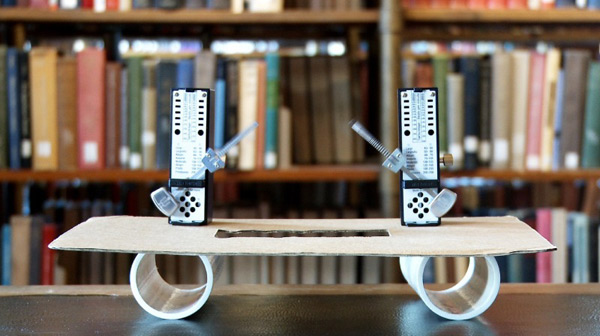 “Rhythm gives things a sense of predictability,” says Charles Spearin, a musician in Broken Social Scene and Do Make Say Think, and known for his album The Happiness Project, for which he found music in his neighbors’ voices and put instrumentation to it. Spearin is one of the focal points of this Toronto-made documentary, a look at the structure of human and natural beats. Taken through pulse, light, music and the synchronicity of falling into step with someone, we’re presented facts and opinions by Spearin and other interviewees: math professor Steven H. Strogatz, director of the Global Consciousness Project Roger Nelson, professor Caroline Palmer and nurse Menaka Ponnambalam. A lot of the film is pretty imagery focusing in and out on nature. Sometimes it can feel a little obvious (look at the rhythm of water falling off this icicle!), but this is a well done version of something everyone must ponder once in a while. It doesn’t really have a big question or a big answer besides “how do we find what the beat is?” which actually provides a great platform to Spearin to play on. This is more of a gathered observation, which might leave you in a quizzical state. Spearin’s part is the most fascinating and his compositions along with other musicians add another layer of beauty. – Jessica Lewis

See the trailer for A Simple Rhythm here.