Living the Game is a new documentary about professional Street Fighter players and the challenges they face on the international esports circuit. Directed by Takao Gotsu, the film follows Street Fighter champions Daigo Umehara and Momochi as they prepare for several high-profile tournaments, chronicling their lives as they travel around the world to compete in front of massive audiences before returning home to small apartments and the ordinary struggles of everyday reality. With additional appearances from Gamerbee, Luffy, and Justin Wong, Living the Game gives viewers a behind-the-scenes look at the work that it takes to reach the highest level and demonstrates that playing Street Fighter for a living is a lot more glamourous in theory than it is in practice.

Living the Game will premiere as part of the Made in Japan program at the Hot Docs 2017 Film Festival in Toronto (you can check out our full review over here). We interviewed director Takao Gotsu prior to the festival to talk about his interest in Street Fighter and the growing appeal of competition for both casual and hardcore fighting game fans. Gotsu’s answers are translated from Japanese.

Dork Shelf: Why did you want to make Living the Game?

Takao Gotsu: Encountering Daigo Umehara’s book was my trigger to start this project. Then, I was overwhelmed by the scene (on the internet) of game tournaments in Las Vegas: thousands of excited crowds, many of them shouting. Umehara was there, playing with a cool stare and surrounded by furious audiences.

DS: What’s your personal history with Street Fighter? Have you ever competed on the circuit?

TG: I remember that the game was an unprecedented hit. I was not very good at gaming and quit soon. I’ve never been on the circuit, either.

DS: Why does Street Fighter have such a big following? What makes it a good game for spectators?

TG: I believe the Street Fighter game can overcome one’s natural athletic ability, because you only have to press buttons. You can’t beat Usain Bolt but you might feel like you can beat Umehara…but the reality is you cannot beat Umehara either!

I think that kind of masochistic desire makes people follow the game.

DS: Is it difficult to explain Street Fighter to people who aren’t familiar with the game? How did you solve that problem with the documentary?

TG: This was the most difficult thing to overcome. I decided to divide the Fighting Game into a Chess aspect (the strategy) and a Boxing aspect (the fighting). In this way, I try to describe how players become obsessed and how audiences become addicted.

DS: Was it difficult to incorporate video game footage in a way that makes sense for the story?

TG: For the reason above, I definitely needed video game footage – you can’t understand what is going on only by the players’ physical expressions. On the other hand, if I used too much footage, it would be more of a commentary program. The balance between the footage and emotional scenes was challenging. 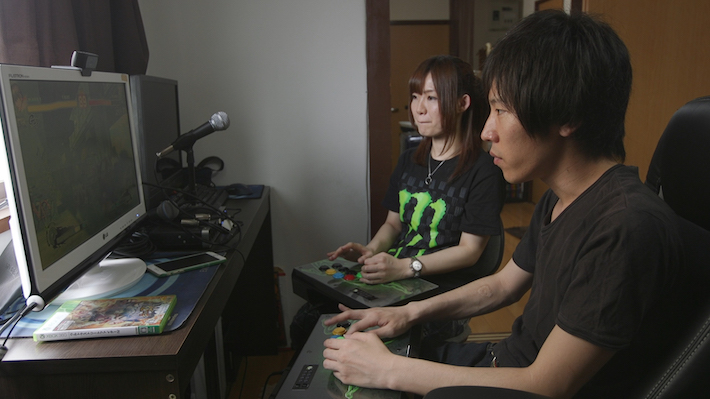 DS: How did you choose the players you would follow? What makes competitors like Daigo and Momochi such appealing stars?

TG: The stronger they become, the more society/old friends look down on them. They are struggling with self-esteem and they are seeking the real meaning of what Strong/Weak means, to themselves. This attracts me the most.

DS: What did you learn about competitive Street Fighter while making the documentary? Is there anything that surprised you?

TG: When I found out they try not to tire of playing games, it was quite a discovery for me. That is their professionalism.

DS: How do professional players differ from regular players in the way they approach a game like Street Fighter?

TG: Practicing gaming is never ending, ordinary practice. Rather than swinging a bat, they are just pushing buttons, but they believe they can express themselves by the single button, which makes them Pros.

DS: Many of the players in the documentary have jobs outside of gaming. Does that affect the way other people view the competition?

TG: These players are popular as a hope – a feeling of closeness to other businessmen who love games.

DS: How will competitive gaming evolve in the next few years? Do you think it will become easier for professional players to make a living?

TG: I personally believe it will peak somewhere in the future. I think Fighting Games are fundamentally different from the prideful world of champion boxer events, like Mayweather vs Pacquiao. And I believe that’s the beauty of Fighting Games.

TG: They [Japanese players] enjoy playing at arcades on an anonymous basis. In Europe and North America, I heard that they enjoy playing with friends. Either way, it’s interesting that they still try to gather or meet face-to-face to play, in this era of the internet.

DS: Who is the target audience for Living the Game? Did you make this movie for gamers who follow Street Fighter or for general audiences who are unfamiliar with the culture?

TG: For general audiences who are unfamiliar with the culture.

DS: Should people have more respect for competitive gamers? What do you want audiences to take away from the film?

TG: People who watch this film might first laugh at the players who threw their lives into the world of gaming. However, by watching the story and knowing their passion, I think no one will be able to laugh at them anymore. We might even find ourselves in their lives as pro-gamers!