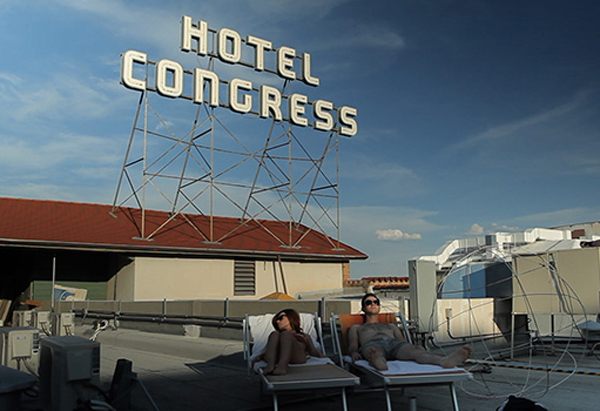 Brechtian and Beckettian in the same breath, Nadia Litz’s heady rom-com satire Hotel Congress owes as much to classic literature as it does to cinema of the French new wave and modern mumblecore. It has a rhythm and specificity that’s assuredly unique, but could find ways of rubbing viewers the wrong way. It takes a long time to become acclimated to Litz’s vision, but once the two characters at the heart of the titular hotel of dashed romantic dreams and missed opportunities begin to click, the movie around them falls into place wonderfully.

Working alongside co-director Michel Kandinsky, with a budget of only $1,000, and on a schedule of only a few short days at the titular Tucson, Arizona hotel, Litz centres her story on two potential lovers: Sofia (Litz) and Francis (Philip Riccio). They have spoken before and they are both spoken FOR. They have travelled to be together at the hotel not to cheat on their respective spouses back home, but to discuss the possibility that they might cheat with each other.

Sofia and Francis are scared, but not stupid. They’re highly analytical, and for the first thirty minutes or so they dance around their issue via speeches flung in opposite directions and a lengthy setting of ground rules as to what constitutes them actually cheating. It’s decidedly unerotic, but it’s all done out of fear. Sofia and Francis are self-aware enough to know what they’ve come together, but neither wants to appear weak enough to make the first move or make things awkward. What results is a warm, wry, and witty tête-à-tête where attraction is danced around as if it’s some kind of hindrance to their happiness.

It takes a good 30 minutes or so to figure out that this bit of precise and mannered verbal gymnastics are borne from real feelings of guilt and fear. They both slowly realize their lives have not panned out as they had hoped, and that they’re actually kindred spirits. The veil of civility rarely slips to allow moments of obvious affection shine through, but it’s definitely there.

That’s where the specificity of language employed by Litz’s screenplay and the chemistry she has with Riccio gives the film its unexpected emotional punch. Their relationship, much like the hotel’s history as a favourite hangout of Dillinger, feels stuck out of time. They act like they’re from a different era, but they’re decidedly modern and of the moment whether they want to admit it or not. Neither is sure about embracing the moment, but the real point isn’t so much if they’ll hook up or not, but if they will realize they are happy or unhappy with who they are in the moment.

It won’t be what most mainstream audiences will be looking for in a comedy, but the literate crowd should get a huge kick out of what’s trying to be achieved here. It’s the cinematic equivalent of scotch on the rocks on a warm day: bitter, earthy, satisfying, and complex. It showcases Litz, who has previously made some stellar short films, as an immense talent that will be making waves for quite some time to come.