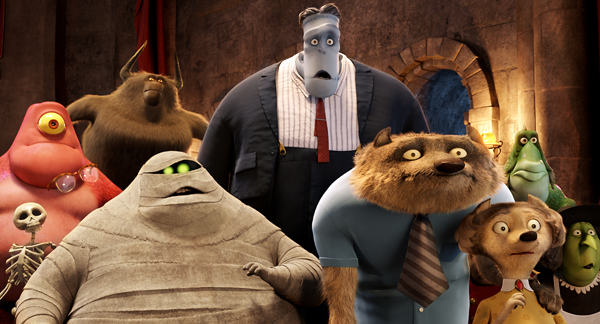 It’s not going to raise the bar for animated story telling all that much, and it probably won’t do too much to repair Adam Sandler’s tarnished reputation with adult audiences, but the fleet footed and funny Hotel Transylvania manages to be the best thing to have the comic actor’s name attached to it in quite some time. A classical sort of children’s story told with snappy one liners and sight gags in place of subversive wit aimed squarely at adults, Powerpuff Girls creator Genndy Tartakovsky delivers a solid effort that should please audiences of all ages for just a little bit over 90 minutes.

After building a remote castle to protect his daughter and provide refuge for monsters wanting to hide from humans, Count Dracula (Sandler) wrestles with his now teenaged (at 118 years old) charge’s desire to see the outside world. During her birthday party, however, an unwanted, dimwitted, Dave Matthews loving American human backpacker (Andy Samberg) turns up and nearly ruins everything for the vacationing monsters and Dracula while striking up a relationship with the birthday girl (Selena Gomez). After his restless daughter takes a shine to the new stranger, Drac has to hide his unwanted houseguest from the other monster patrons who just might not understand.

The story itself never really challenges the viewer to think very much. A father’s pride and joy wants to leave the nest and strike out in the world on her own, but a tragedy in daddy’s past makes it hard for him to let go. It sounds like it has all the earmarks of a potential vehicle for Sandler today, but it’s nice to see the perpetually funny voiced comedian playing the straight man to Samberg’s off the wall buffoon.

The film also harkens back somewhat to a time when Sandler’s cohorts actually got a chance to show off their comedic talents rather than being wasted in random cameos. Kevin James gets a few choice moments as a Frankenstein that’s been tricked into thinking the human is really his cousin, and Steve Buscemi – again in classic Sandler form – runs off with the whole movie as an overworked werewolf that’s a father to a litter of bratty tykes. The script (co-written again by frequent collaborator Robert Smigel) plays to Sandler’s strengths and never once throws any huge curveballs outside of the family entertainment playbook. What it does have are some genuinely funny exchanges that very rarely sink to merely reciting glib pop culture references or cutsey genre conventions.

Assisting, but not really given much of a chance to shine over the voice cast, is the gorgeous animation that ranks as the most detailed of cult favourite Tartakovsky’s career. 360 degree shots of the hotel and sweeping looks at the landscape of the woods surrounding it are dazzling, and while the movie still remains thematically solid, it’s hard not to wish that more time was spent admiring the craft that went into the visuals. It gives everything a sense of scope and splendour that elevates the material for those willing to pay attention to it.

The outcome of Hotel Transylvania isn’t in doubt for a single second and the plotting is strictly aimed at the grade schoolers that will undoubtedly eat the film up, but there’s something almost refreshing about a film that’s simply trying to entertain the kids without winking and nodding to the adults in the crowd the entire time. It’s like a grandfather telling a story at Halloween trying to make the kids laugh by putting on a vinyl copy of Bobby “Boris” Pickett’s “Monster Mash.” It’s a confection whose memory will last about as long as a fun sized Snickers in front of an 8 year old, but it still does the trick.