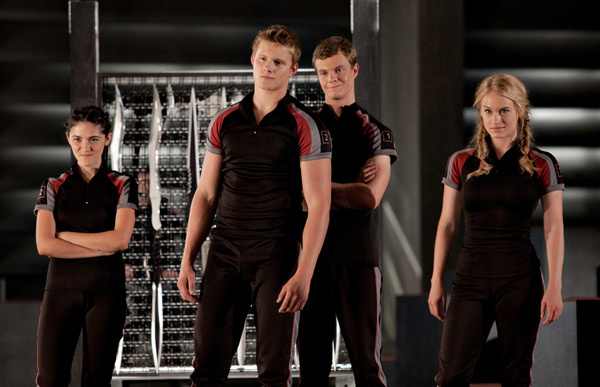 A bundle of youthful energy and happiness, Alexander Ludwig bursts into the room for his interview, happily greeting members of the press and thanking them for coming out. He couldn’t seem further away from the character he portrays in the highly anticipated big screen adaptation of Suzanne Collins’ The Hunger Games. He looks more the part of the boy next door than he does the cold blooded and villainous Cato, a tribute from the wealthy District Two who’s determined to win Panem’s 74th annual Hunger Games ceremony where young adults are forced into a secluded location to battle to the death. Then again, his innocuous looks might be part of the dystopian film’s greater point.

The role marks both a departure and a coming of age for the young Vancouver native. Previously known for his starring roles as good kids in Race to Witch Mountain and The Seeker: The Dark is Rising, Ludwig seems positively excited to be able to let go of his inhibitions to get down and dirty in a supporting role for director Gary Ross (Pleasantville, Seabiscuit) and his vision of Collins’ Most Dangerous Game styled future.

Dork Shelf sat down to talk to Ludwig on the day of The Hunger Games’ huge Toronto premiere to talk about working with Ross, the physical strain of the shoot, and the hype surrounding the first film in the Hunger Games series.

WARNING: The following interview contains SPOILERS for those unfamiliar with the books in The Hunger Games series.

What was it about Cato that attracted you to the part?

Just his kind of more dark qualities. It’s just really fulfilling as an actor to just experience more of the dark side of humanity.

Could you talk a little bit about the training you had to go through in the film? Your weapon of choice was a sword. What was that like?

It was very, very physical. Obviously, Cato has the most action in the film, so I had to put on over thirty pounds of muscle and work with a US Navy SEAL. There was a lot of sword training, hand-to-hand combat fight training, free running, parkour kind of stuff, and that was very, very cool to do, but it was something like four hours a day. Obviously we had a day off on Sundays, but other than that it was pretty aggressive.

Now this is still a movie about kids and youth, but it’s also about them having to face each other to the death. What was the atmosphere like on set?

It was pretty light. It was pretty nice. I think you have to keep it light and fun or it would just be such a gloomy set if you were always acting like the books were. It was fun, and light, and very free and Gary was a great director who allowed a lot of space for creative freedom and to experiment.

You’re playing this villain from this really iconic book series that people love around the world. Do you think that created any added pressure for you that you needed to throw yourself at the role?

Yeah, I guess there’s obviously pressure from the fans because it’s such a big phenomenon, but it’s more just the pressure I put on myself because I’m a huge fan, as well. If I wasn’t in the position I was in now, I’d be on the other side of the ropes screaming with all the other fans.

At what point did you realize just how huge the fan base was for The Hunger Games?

Oh, that’s still happening right now! With the L.A. premiere that just happened it was insane. It took me about an hour and a half just to get down the carpet and you have these fans just screaming your name. You feel like a God. (laughs) But, you know, totally, totally undeserving. That’s probably the first time it really hit me. I never expected it going into the movie that it was going to be like that. I knew it was definitely going to have some traction because the books are phenomenal and the writings amazing, but to this extent, with me personally, I thought the movie would be getting a lot of attention and not that I was getting a lot of attention. That was definitely a shocker and it’s really a phenomenon created by and for the fans, and it’s always a pleasure to have people admire your work. That’s awesome.

I think this is just something more that’s never been done before. I think that’s why a lot of people are excited about it. It’s very original and very new and edgy. I think that people like to see things like this that are popular, but not afraid to push boundaries.

I think a lot of the phenomenon centres on hope. Hope is a big thing in these books, and it also kind of parallels what’s going on with reality TV right now, and how kind of dark things have been getting on that front. I kind of hate reality TV. I mean, there’s certain things I love about it like this one show, I Shouldn’t Be Alive. (laughs) I love that kind of stuff because I like applauding people’s successes because I think it says a lot about our society that a lot of people are more entertained by people’s downfalls and faults. I think that’s something of a parallel that can definitely be drawn from Hunger Games, but mostly I think it’s just about hope, and it’s an emotional rollercoaster for sure, but I think everyone can relate to the main character in some way.

Given the popularity and the size of this, do you worry about getting stuck in this same sort of role for the near future?

Oh, no. Not at all. I think a positive would be that I don’t continue into the other books. I wouldn’t have taken the role if he did. I took it almost specifically for that reason, and because at the end of the movie you see a lot more to Cato than originally expected. If you’ve read the books, then you know what I’m talking about. There’s a lot more depth and substance to the character than just a normal villain. That’s kind of what attracted me to the role because I’m usually just used to playing leading good guys, and I just wanted to really experiment with the dark side of something for a change.

Was there anything specifically that you drew from the books to create your version of the character?

Not really anything specific, because I mostly just used what was there because thanks to Suzanne it was all mapped out on paper for me well in advance. That was nice though since she did half the work for me. I created a bit of a backstory with Gary and Suzanne to create a character that was a bit more deep and complex than he was in the books. He definitely does have a bigger presence in the movie than he does in the books, which added a lot of creative freedom for me to experiment with different parts of the role.

I could imagine that this was a pretty sought after part for young actors. What was the casting process like on this film for you?

It was actually one of the easiest casting processes I’ve ever been through, which is pretty ironic. You’d expect it to be really intense, but for me I just guess I got lucky. I just went to Gary’s house and I read twice in one day, and then the next day he called me back. I asked Gary why it was so easy and he said that he just kind of cast me in the room. Gary really knows what he wants and he said he just knew after I was done that I was Cato, so that was really cool.

It’s really nice to see a director who knows what he wants and doesn’t spend too much time with anything else.

This was a job that Gary really had to fight for, too.

Yeah, I think he wanted the job so badly because, you know other than how it was going to be this huge film based on this phenomenon, which was something he didn’t seem to care about, was because it was just a complex and interesting story with such a simple message. Gary’s really drawn to taking intriguing projects that really make you think about life, and he’s such an intellectual being that could do everyone’s job better than they can. I think he just really enjoys being a part of this. He’s also a really talented writer, and it’s really important to have someone like Gary on board to tackle these books that have so much substance to them and to make a true portrayal of it. I don’t think anyone could’ve done it better than Gary. He put his heart and soul into this one.

He has an exceptional talent for being able to relate to actors, too, which probably comes from the fact that he was an actor himself a long time ago. It’s a great medium between relating to them and being able to run well behind the scenes just as well, if not better. He also has this really interesting technique, where he would have this speaker and this microphone, and he would be narrating based on what we were doing. For a lot of actors, I think that could be tough, but for me that was the best because he made it so much easier because he was telling me what the character should be feeling as I was going through this experience. It was cool. He would just talk you through it with this totally alternative style that was really great.

Cato’s an extremely violent character. Coming from your more heroic on-screen background was there some hesitation there?

No. None at all. It’s fun to play something different. Cato’s really vicious, but it’s really fun getting to play the badass. It’s a totally different side of acting.

Was there any particular moment during filming that you found really hard to deal with?

Definitely Cato’s demise was emotionally draining. It was a lot more draining than I would expect. When you’re dying on screen, that’s something as an actor that’s a lot more gruelling than you would expect. I learned a lot about that character from doing that particular scene. It was one of my favourite scenes to shoot, but it’s also physically exhausting because fight scenes are something that I love to do since I do all my own stunts and fight training, but when you’re out in the humid North Carolina heat, you’re finished and you’re just panting and sweating. It was the most disgusting thing I’ve ever experienced. (laughs)

You’re also playing the leader of a group of villains that are out to take out the main characters. Did you do anything with the other actors in your pack to sort of bring out a group dynamic?

We automatically connected, but the funny thing was that I had actually thought about doing something like that, but then I thought to myself that Cato’s going to try to eventually kill all these guys. If someone else doesn’t, Cato will. We just kind of started thinking about it as we were filming. Cato plans on winning the Hunger Games, as does everyone else there, and that dynamic is kind of funny because even though they’re working together and laughing, they aren’t friends at all. Of course we all did group activities, everyone who played the tributes. We all did big Army exercises and flipped huge tractor tires together, so that was nice.