In the early stages of Far Cry Primal, your primary antagonists – well, other than the wildlife – are the Udam, a cannibalistic tribe led by a warlord named Ull. One of the game’s first missions forces you to defend your village against an Udam invasion and you’ll regularly stumble across Udam campfires where your Wenja brothers are roasting on spits in preparation for dinner.

Despite those barbarian tendencies, the Udam aren’t villains as much as they’re a rival group of survivors. Your fellow Wenja aren’t much more civilized. You’re not a tribe of cannibals, but you will kill and torture the Udam to make necklaces out of the ears. The notion that you’re somehow more noble than your adversary rapidly evaporates given the demands of survival of the fittest.

“Honestly, I don’t think anybody was the good guys back then,” said David Robillard, the Technical Director on Far Cry Primal. “Obviously we don’t want to play cannibals, and the Wenjas didn’t have to resort to that because they had more resources during the Ice Age. But once the Stone Age started, it was a lawless frontier. It was kill or be killed. Gather or die. It was all about making a big group, getting security from that, and then making sure that you overcome the obstacles that are thrown at you.”

All of which is to say that Far Cry Primal establishes a tone, one in which cannibalism is not an unconscionable sin as much as a legitimate-yet-frowned-upon survival strategy, one of the acknowledged dangers of existing in a prehistoric realm.

That’s what makes Primal so fascinating. The Far Cry series has always had a strong sense of place, traveling from tropical islands to the fictional mountains of Kyrat. Far Cry Primal also has a strong sense of time, distinguishing it from previous versions of Far Cry that take place in the modern era. Though the more recent locations are remote, you can still visit them and they still bear the hallmarks of modern civilization, including cars, clothes, guns, and other conveniences. The developers can therefore build Far Cry based on first-hand accounts knowing exactly what tools, technologies, and weapons would reasonably be available to the player.

Far Cry Primal presented different challenges. Though archaeologists and anthropologists can make informed suggestions, no one can provide a true firsthand account of what it was like to be alive during the Stone Age. Outside of a few cave paintings, whatever is left of the oral storytelling tradition has long been lost to memory.

As a game developer, how do you know what society looked like in that era? What kinds of tools and materials did people use to stay alive? And more importantly, how do you incorporate that information into a modern video game, where players expect to use guns and grenades and tanks to take out armies of foes?

“You have to find the sweet spot between believable and fun,” said Robillard, acknowledging that Ubisoft took some liberties with the historical record. “For instance, if you take our weapon arsenal, at some point you will upgrade your bow and your bow will become a double arrow bow, so it’ll shoot two missiles instead of one. Pretty sure they didn’t have that in the Stone Age, but it’s pretty damn cool.”

That notion – that Primal is at least grounded in reality – helps construct the brutal gameplay tone that makes Primal feel so distinct. The game is not a historical record, but the nods to historical accuracy encourage players to stretch their imaginations and make it easier for a video game to transport players to a different place and time. Historical artifacts – no matter how exaggerated – allow us to believe the lie.

“Primitive man did have access to some basic tools such as clubs and spears. Bows could have happened in the southern region where the tribes were a little more technologically advanced,” said Robillard.

Of course, it’s one thing to know what kinds of tools existed at the time. It’s quite another to know how people used them in their day to day lives. In order to complete the effect – to make players believe that Primal takes place in the ancient past – Ubisoft had to make sure that the characters walked and talked in a believably prehistoric fashion.

Fortunately, there’s enough existing research to make the tribes in Primal plausible. That’s also why cannibalism doesn’t seem quite as repulsive in Primal as it does in more contemporary settings. It’s unsavory, but it’s likely that some prehistoric tribes did resort to the practice given the lack of more reliable sources of food. At some level, we understand that historical difference and that the depictions of cannibalism are there to establish authenticity rather than shock value.

“The tribes are fictional, but they’re loosely based on some behavior that we saw. For instance, the Udam are similar to the Neanderthals and the Izila are more closely related to the Mesolithic tribes of the era. The Wenjas are an amalgam of what you would find in Europe at that time.”

Language was another essential piece of the façade. Each of the three tribes has its own language, and the development team made frequent trips to speak with Andrew and Brenna Byrd, Professors in Linguistics at the University of Kentucky who focus on the Stone Age. They consulted with the team to make sure that the languages were as realistic as possible, even helping with motion capture to make sure that the facial expressions in the game matched the sounds of the various languages.

“I don’t know if it sounded exactly like that but I think it’s a very close approximation of what it could have sounded like,” said Robillard.

The attention to detail does help construct the illusion. All of the characters in Primal are fluent in their own tongue, talking as rapidly as they would in any other game. They sound natural – like people with beliefs and lives and other concerns – and the developers were able to layer a more complete culture on top of that foundation.

“The first cave paintings are the first recorded history that man has,” said Robillard. “It signified a better understanding of your surroundings and it ensured that you left something there. You left your story.” 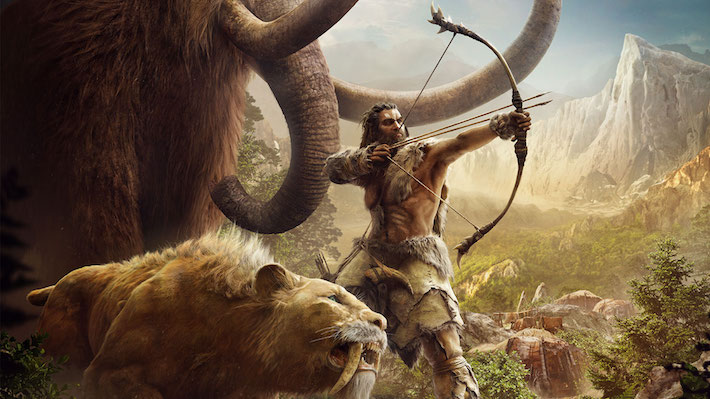 The specifics of that culture are a little more of a mystery, but Primal offers a convincing take about what it could have looked like. Far Cry Primal builds an entire culture, showing us how the characters live, how they speak, how they acquire knowledge, and how they interact with the world around them. That level of depth – that focus on the more mundane and abstract aspects of existence that we often take for granted – allows the land of Oros to feel like a real place with real people at the center. Far Cry Primal may be set in the ancient past, but the concerns that make us human are still refreshingly familiar.