It is genuinely hard to say it isn’t easy being a vampire without being drawn to a pun. “It must suck!” “It surely bites!” But aside from inconveniencing rule sets and sensitivity to sunlight, the biggest pain in a vampire’s neck… tsk, damn it… is how goofy they look in just about any scenario outside of a velveteen castle. What We Do in the Shadows, a hilarious new monster mash from Flight of the Conchords’ Jemaine Clement and director Taika Waititi is all about the inconveniencing, gruelling awkwardness of being the undead in the unlively town of Wellington.

Following a clan of vampires, the theatrical Vladislav (Clement), the dandy Viago (Waititi), the careless Deacon (Jonathan Brugh) and new guy/idiot Nick (Cori Gonzales-Macuer), the film answers the question you never thought to ask: What is there for a vampire to do in New Zealand? The answer is: Not a whole dang lot. Trying to get into nightclubs, because they need to be invited in. Dealing with the politics of their thralls (Viago just feels they should go with slaves). The small scuffles with other local monsters.

The film works brilliantly due to the contrast of vampire theatrics to the mundanely of the real world. That mysterious grand balls look similar to bingo nights at the community center. That being a vampire, despite all the expected glamour, might not be that exciting. I spoke with Jemaine Clement and Stu Rutherford, an IT guy who plays himself in the film, about their nightmares, their coffins and what Halloween in New Zealand is like.

Dork Shelf: What brought you to vampires?

Jemaine Clement: I was always into vampires. I woke up late at night, when I was four or five, wandered into the sitting room, and my mum was watching this vampire movie, Scars of Dracula. I was fascinated, and a lot of my nightmares growing up were of vampires chasing me around. You know how you can fly in your dreams sometimes? I’d be trying to fly away from these vampires, but, they can fly too. It’s no use. I probably was always going to do something about vampires. Taika and me, we did some weird vampire stuff on stage, one time, at a comedy bar. I came out and did a big speech about being a vampire, then he floats in, “Ahhh, my old vampire riiiival.” We have this big argument across the bar.

DS: Was any of this trying to take vampires down a peg?

JC: No, because a lot of this came before the current wave of vampires. Back when it was very retro. We kid at it in the film, seventies vampires, or nineties. A bit of Hammer House.

DS: Do you think making fun of vampires is funnier when they’re generally taken seriously?

JC: I’m not sure. When we came up with the idea we didn’t take them seriously. They were a vintage thing. One thing that vampires did for us is make it easy to get funding. Vampires are hot! Let’s get some of that money then! Our vampires aren’t hot, hopefully no one seeing the film is hoping to see hot vampires.

DS: How much of the film was inspired by the setting, Wellington?

JC: The city is so prominent in it, because that’s just what it would look like on the nights that we were out. It doesn’t look so good in the film, doesn’t come off as so interesting. Wellington’s a funny one. Sometimes it was really fun, crazy even, some of the nights going out, you know, people can get really drunk, it can be a real mess. When we made the short film, eight years earlier, we were dressed like that, frills, fur, we just constantly thought we would get beaten up.

Stu: I was certain we would get into a fight. We were walking down one of the main streets and these guys would yell out these terrible things.

Stu: Something bad’s going down.

JC: You can see it in the short too, we look a little spooked. See the adrenaline. In the short we put all those guys in, yelling “HOMO, PUFFY PINK PANTS.” But then this time, we couldn’t even convince people to do that. I think it’s just not cool to do that anymore. It’s really interesting too. We were surprised by how much attention we were getting from women, dressed like that. Some were instantly flirty, and we didn’t expect that.

Stu, I heard you’re an actual IT guy, so how much of Stu in the film is you?

Stu: It’s basically me in 2005. I got pulled into the short, and I handled the job in that film as the job I had at that time. There’s a lot of Stu in Stu. 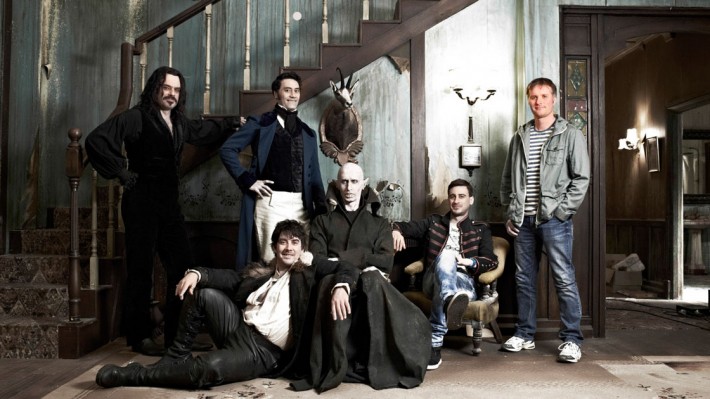 DS: How did that Stu get sucked into it?

Stu: A few days before the filming of the short, Taika came, I was living in a flat with him and three other people, he asked if they could store a coffin in my room. I thought, yep, just wanted to make sure there wasn’t a body in it. When they started shooting, I found out it was a vampire film, so that made more sense. They didn’t spend much money at that time, so they didn’t have any crew. So often I’d move a light, or when they went downtown I’d have to help out.

JC: Stu’s not a flashy person, and because we’re all dressed up he really starts to stand out. He’s only in it a little bit in the short film, but when we wrote the storyline for this one we ended up putting more and more of him in. Also when we brought him in, he really thought he’d just be doing some computer stuff in the office, but then we put him in some scenes.

Stu: I was there a week or two before shooting even started, so people would come up to me when the wifi wasn’t working, or the printer wasn’t functioning.

DS: Did you enjoy acting?

Stu: Yeah, it was a lot of fun. Even easier than just being myself.

DS: Must make you pretty popular among the other IT guys.

Stu:  Yeah, I went with all the IT guys from my IT job, and they quite enjoyed it. I’ve had people message me on Twitter.

DS: Is there something inherently funny about monsters?

JC: Yeah, I guess so. A lot of horror movies, gothic, and it can get pretty camp. When we went to the feature film we added the werewolves, the Nosferatu, the zombies. We were going to have ghosts at the ball but we decided it might have looked a bit weird. I think it might have looked fine. We had a great special effects supervisor, he’d just ask, “DO YOU WANT GHOSTS IN THIS SCENE?” and we’d say, “Nah, we don’t need ghosts here.”

DS: Are you big on Halloween? (Interview was conducted around Halloween, though I might have asked this question in July knowing me)

JC: When we were kids, it wasn’t big at all.

Stu: Because it’s summer. It doesn’t get dark until much later.

JC: Kids are starting to do it though.

JC: They come to our house. When we were kids, one kid turned up at our house once and said “trick or treat.” Our mom just laughed and shut the door on her face. A “you think you’re in America laugh.” I would have loved it though. I remember seeing it in E.T. and being mystified, what’s everyone doing?! When does this happen?!

Read our review of What We Do In The Shadows here.