It wouldn’t spring to mind immediately thinking about her past work, but one of actress Julia Louis-Dreyfus’ favourite movie moments is the opening scene of the 1986 basketball drama Hoosiers.

“It’s so tiny but the opening scene of Hoosiers with Gene Hackman is something I just find beautiful.” Dreyfus said while in Toronto to promote her starring role in Nicole Holofcener’s latest comedy Enough Said. “He’s just in the car and driving and drinking his coffee, and the way he sits and drinks the coffee is just sublime to me.”

Talking to Dreyfus and her approach to acting, such an introspective moment in cinematic history makes perfect sense for the four time Emmy Award winning actress, who just picked up her most recent this past week for her work on HBO’s Veep. Bringing a lot of her own personal thoughtfulness to her role here, she clearly has a deep appreciation for quiet character beats as much as she does the punchlines and dramatic speeches that come so naturally to her.

In Enough Said, Dreyfus plays the leading role of Eva, a soon-to-be empty nester and massage therapist who begins a relationship with a man she meets at a party filled with mutual friends. Played by the late James Gandolfini in one of his final roles, the man turns out to be the ex-husband of her new best friend, Marianne (Catherine Keener), who has nothing but awful things to say about her new beau behind his back. Already dealing with enough stress because her daughter is getting ready to leave for college, Eva never tells either party what one thinks of the other, but their opinions colour her perceptions of the both of them.

Dreyfus talked to Dork Shelf about creating chemistry with the cast, how she brought her own personal feelings about her eldest leaving for college to the production, and why she never really actively sought out work in film prior to this.

You have such great chemistry with your co-stars, but the relationships you craft with all of them are different, even in terms of the friendships being forged. How did you work with everyone to hash out that kind of familiarity with each other? A lot of it feels really organic and natural between you guys. 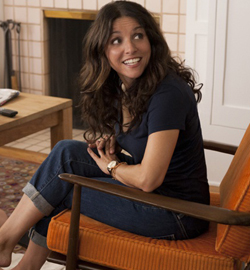 Julia Louis-Dreyfus: Oh, good! I’m so glad to hear that, but, I mean, a lot of that is right there on the page. Eva’s relationship with someone like Sarah, played by Toni Collette, is the kind of thing that’s been a long standing and lengthy relationship, and they’re close, close friends, so there was a comfort level and an easy there because Toni Collette is such a great actress. I mean, come on, she’s incredible! Just to add to that, I would say for someone like Eva to bear witness to the relationship that Sarah has with Will, played by Ben Falcone, is a relationship that’s fraught and an example of what she might not want, and that can also fuel her own indecision to tell the truth.

With James Gandolfini, I think there was a little reticence at first. Not because he didn’t want to do comedy, but he was definitely feeling he was sort of undeserving for this part to some extent, which is totally ridiculous, but he would make jokes to Nicole and say “Feel free to call Clooney if you want!” (laughs) He couldn’t see himself as a character who would actually get the girl, and that made him so much more eminently loveable. In other words, very close to who he was in real life. He wasn’t , like, a fish out of water because he was just such a remarkable actor, but maybe he was slightly putting himself down about it, and that was kind of perfect for the role. He was kind of harder on himself than he needed to be.

I remember where I was when I heard about his passing. I was driving on the 101 Freeway. It was such a shock.

Your character is difficult to get just right because she has a sense of emotional honesty with herself, but not at all with the people around her. How would you say the character would reflect on yourself and what did you bring to the role?

JLD: Well, I have to same yoga pants. I can tell you that. Those are my yoga pants. (laughs) I don’t know, really. She’s a great person with a great propensity for bullshit. (laughs)

A lot of me is there, and I will say that with my children being 21 and 16 when we made this I had just gone through the landmark moment in our family’s life of taking our oldest son to college, and that was pretty excruciating. That was a lot of what drew me to the script. Being able to talk about it and about a parent’s experience.

I remember when it happened to me I cried a lot. I cried even just in anticipation. You know, you find yourself doing really weird things, but I didn’t act out the way Eva does, but I can see that kind of denial that sets in because I experienced that. I don’t know how interesting this is, but both of my sons went to the same school, and they would usually send us the bill for the tuition for the following year, and I always send in my money on time, and it didn’t dawn on me when I only got one bill and not the other that there was any chance of my eldest son moving on. I just delayed and said “Well, I’m not going to write two cheques. I’ll just wait for the other to come in or see what’s going on.” And I waited and waited, and it wasn’t until I actually picked up the phone to call and find out when I was going to get it that I realized I was never going to get it.

It’s bizarre because these people that you have raised have to be functional and independent human beings at some point, and hopefully you have created a safe enough place for them to get to a point where they feel safe and comfortable enough separating. I definitely thought it was weird and you never consider it. You could say that if you are parenting correctly, it`s just a series of separations. Really. First they sit up, then they crawl, and then they can just walk out of the room. It`s a metaphor for all of human existence in a way.

As for that denial permeating the rest of her life, I mean, in small or medium sized social circles I think this is a totally believable scenario. I certainly wouldn’t do what Eva did. On the surface what she does is duplicitous, but she’s also sort of hijacked by an emotional reaction tied into where she is in her life and she almost can’t control herself. I mean, this story never happened to me or anyone I know, but I can see the reflection that emotional response would have in other situations, sure.

I think Eva doesn’t realize that the potential dread brought on by the impending departure of her daughter going off to college is fuelling her actions over the next couple of months in ways that she doesn’t ever realize. She’s fundamentally a very good person, but she’s also fuelled now by her own fears.

I like exploring human behaviour. I find it fascinating just in terms of how people behave and make things seem real and true. I don’t really know what it is. It brings me a sense of unbridled joy that I can’t really explain.

I was talking to Nicole earlier about how hard it is for actresses once they hit 40 to get great leading roles like this, but you are in some ways an exception since you have done so well for yourself on television. What made you want to take a starring role in a feature film and how does that compare to being a woman who can easily headline her own TV show?

JLD: Let’s see… To be honest I wasn’t really seeking working in film very much prior to this time because I was doing so much TV work, and that’s really demanding on my schedule for about nine months out of every year. It’s phenomenal to have steady work, believe me. And whenever I had any down time, I always wanted to be at home because I had both of my boys during the Seinfeld run, and then I was raising them. Family time and my time to be at home was always precious to me, so I never wanted to be racing off to do this movie or that movie. While it was certainly appealing on one level, it was unfathomable to me on another.

So now I’m doing Veep, which is ten episodes a year and my calendar now has a couple of extra months that have opened up on it, and this script came along at the perfect time and we were still able to shoot in LA. But the part really spoke to me. I felt like I could really sink my teeth into it.

But TV is so great. The landscape has broadened so much over the past ten years, and there are so many more showcases for such a variety of different voices now. It’s also a great place for women to work.

And to create a character over a longer period of time, too. Is that something that you find appealing about TV work?

JLD: Well, it’s a real benefit. It’s not the only reason I would do it, but it’s a definite benefit. But I’ve done it because it was always where I found the best work for me. It was where I got the jobs.

I mean, Seinfeld went on for nine years, and there was a lot we did in that time. I’m not sure you could be vice president for nine years. (laughs) You can only do it for eight.