Doris Payne doesn’t look like a criminal mastermind. She looks like someone’s kindly old grandmother at age 79, but throughout her 60-plus years as a master of slight of hand and thievery, she amassed a wealth of stolen merchandise and jewellery that totalled almost two million dollars… that we know of.

The subject of the highly anticipated Hot Docs World Showcase feature The Life and Crime of Doris Payne is at a crossroads in her life when approached by filmmakers Kirk Marcolina and Matthew Pond. Her family life is kind of a mess, with a son who seems to only be using her for drug money and a daughter who respectfully maintains some distance. She’s also facing a five year sentence for yet another accused jewel robbery. It wasn’t as easy for her coming up as a thief, either. She was an African American woman living in a turbulent time historically, making her cunning and survival skills almost admirable if not entirely agreeable.

It’s amazing that she was ever able to make it even that far in life. Over her globetrotting escapades that saw her stealing valuables all over the world, the FBI amassed a 2,000 page report on her. This was somewhat newsworthy to Marcolina and Pond, who had started filming before these very files arrived. It created a two year long production and a sprawling look at a woman about to face a sort of karmic reckoning. It begs the question of how late in life can someone learn a lesson. The film also asks the viewer to question Doris’ sincerity.

Dork Shelf caught up with Pond over the phone, to talk about the film, his impressions of Doris, and the many twists she had in store for them while they filmed.

Dork Shelf: Matthew, you first became acquainted with Doris’ story through an article that you read about her life shortly before she was due to be released from a holding facility and placed in a halfway house in 2010. What was it like trying to convince her to let you into her life?

Matthew Pond: I read about her in an online newspaper. She was in jail at the time for another crime, and we couldn’t get access to her right away. The first time we met was while she was still in prison, and she was behind this partition and all that, and gave me a great big smile. I was a little nervous, at first, but she just started talking straight away. I was really surprised that she was willing to be this open with some stranger she didn’t know, but she also really wanted to see her own story told. She was guarded but it was remarkably easy.

DS: Did you know right away when you were first talking to her that there was something pathological about how she operated and what was the first time you realized that she was a masterful manipulator of people’s feelings?

MP: I had done my research so I knew that she was a career criminal and that she charming. There’s a lot of good and bad in what she does and how she did them. It’s good in some respect that she didn’t get caught and others where she did. When did I first figure out? That’s a good question. There’s a scene in the film where she sort of embroiled us as an alibi and put us in the middle of her own situation.

DS: I was just going to ask you about that scene where she said she used you guys as an alibi for her parole officer. Did that change how you guys approached the filming at all?

MP: No, it didn’t really change our approach, and I think I knew a lot of the time from the stories she was telling and how she was relaying them that she always had a way to keep us going. I knew we were being manipulated. I think you just let yourself go along for the ride you wouldn’t really have been able to convey who Doris truly was. We all wanted a film done and for her story to be told on screen. There was a kind of unspoken conspiracy between the subject and the filmmakers on this one. I guess that’s true in a way. Not to say that we’re condoning her crimes or that anything that appears on screen is scripted or manufactured. She was aware of the exposure that she was going to be getting from the film and it never really got in the way beyond that point.

DS: Doris seems like a grand storyteller. Was there anything that you couldn’t use in the film because you either couldn’t verify it or because it just didn’t fit that you wish you could have kept in there? 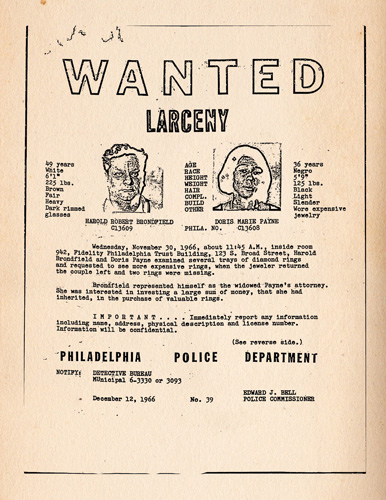 MP: Oh, yes! So many things! We got the FBI file through a Freedom of Information request, and that file contained even more outrageous stories than what she shared with us. We had a hard time in the edit trying to pull together what we thought were the best stories for the film. We didn’t have the time or the opportunity to ask her about these heists and escapes She was a bit coy about talking about how had escaped and slipped custody numerous times, which was understandable. We really had to pick and choose. She was at it for about sixty years in total, and that certainly leads to a lot of great stories to choose from.

DS: It’s also interesting seeing how Doris worked quite heavily as an African American woman at the height of the Civil Rights movement and was able to travel the world blending into her surroundings. Was that one of the things that primarily drew you into the making of the film?

MP: Definitely. That’s what made her story all the more compelling, I think. The fact that she was really fooling everybody. It’s the great American dream, in a way. She wanted to be a ballerina and she was told there were no black ballerinas. She always craved that kind of life for herself. We always took a non-judgmental approach, but her background and the time period makes her all the more interesting. Here’s this poor black girl from West Virginia who turns into someone who hobnobs with wealthy types in Paris, Monaco, and Japan and make them believe she was wealthy enough to run in their circle if only long enough so that she can steal from them. Again, we’re not condoning crime, but there’s something that’s even at its most basic at least begrudgingly admirable and enviable about the way she operated.

DS: What was it like trying to reach out to Doris’ family, specifically her kids, one of whom doesn’t want to be on camera and the other of which looks somewhat suspect in his own right? It’s interesting to see how her kids have become polar opposites of each other. Neither of them are even that much like Doris.

MP: I think you’re right. Donna is the long suffering daughter who every month writes a cheque to storage place that houses all of her mother’s stuff while in she’s in jail. She loves her mother but there’s that slight sense of embarrassment there that we kind of address. Ronnie, on the other hand, has some dependency issues. We were sort of torn revealing some of that, but we got such strong reactions from him when we filmed him. I think he was high part of the time, actually, which kind of leads to that kind of behaviour and makes such an interesting contrast to his sister. But both are products of Doris’ parenting and her choices, both for better or worse.

The Life and Crimes of Doris Payne screens: