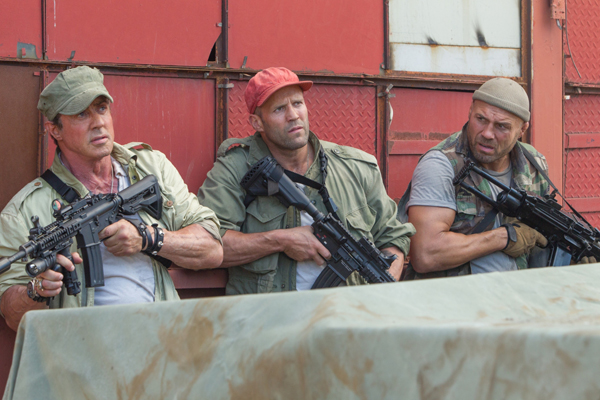 Former MMA star Randy Couture retired from the sport that made him a widely known name at the age of 47. At the age of 51, he has become a full time actor that still talks like an excited teenager when he talks about his new profession. Newly invigorated, the former five time UFC champion (the only to win as both a Light Heavyweight and a Heavyweight) has thrown himself completely at his new day job and speaking on the phone with him, he sounds like he couldn’t be happier.

A big part of his success in his new profession comes from his role in the ensemble cast of the Sylvester Stallone starring and written Expendables franchise. Reprising his role as Toll Road this weekend in The Expendables 3, Couture (who has still appeared in several other films outside the franchise) once again joins a cast of older action all stars returning from previous films (Stallone, Jason Statham, Dolph Lundgren), new veteran arrivals (Harrison Ford, Wesley Snipes, a villainous Mel Gibson), and new action stars in the making (Kellan Lutz, Ronda Rousey, Victor Ortiz) in a film where a team of mercenaries have to once again stop a bad guy from reigning war and chaos down around the world.

Despite a stacked cast, Couture gets his biggest chance to shine yet in this installment from young Australian director Patrick Hughes. We spoke to Couture over this past weekend about getting a chance to develop his character more, the differences between making the three films, how he still gets star struck, working with new fight veterans joining the cast, and why he and Dolph Lundgren will never really be able to use a tank.

Dork Shelf: It’s kind of exciting to see that your character has a bit more of a high profile in this one. He’s one of the few members of the core Expendable group that’s left at the start and you get to play a huge part in the big helicopter chase at the beginning and you get to play around inside a tank at the end, so what was it like having a lot more to do here comparatively to the other two films?

Randy Couture: It was nice to get to stretch a little bit and get a chance to develop Toll Road a little bit more. I got some good exposure with the character, especially when I’m in the film with so many other major, huge guys. It’s always a challenge to make sure that everyone gets their moment to show their stuff, so it was a lot of fun for me, and Patrick Hughes was really amazing in that respect in terms of making sure everyone got to have those really great, huge moments to shine.

DS: Now that you have done all three films in the franchise, each with different directors, and considering that this film is largely about bringing in some new blood to become a part of this team, how does Patrick stack up to Sylvester Stallone on the first film and to Simon West on the second film?

RC: Well, I still don’t know how Sly survived that first movie, to be frank. I mean he wore so many hats to get through that entire process and we shot nights throughout the entire film just to get to the end. We did that for 12 weeks and we were up every, single night. Sundays were the only nights we had off, and you kind of get off track being up all night, all week. So Sunday nights on that shoot always sucked because you’d just be sitting in your hotel room twiddling your thumbs and thinking, “What the heck am I going to do tonight?” (laughs) It was especially dangerous being in a hotel room that was just a few blocks away from Bourbon Street in New Orleans and you couldn’t go out most nights and enjoy it. (laughs) That was definitely an adjustment.

I have no idea how he survived. He was writing. He was directing sometimes up to three units at a time. Then he was directing and putting himself in front of the camera for that entire process. He was very, very, very stressed out. We never got to spend much time with him at all during that process.

On the second film with Simon West, I actually feel like I got more direction from Sly. He wasn’t directing this time, so he plugged in more with the actors and the crew. He was changing lines and re-writing stuff to fit our needs. We got to spend a lot more time with him for the filming of the second one. And Simon kind of just handled all of the big shots and was allowed to tell the story the way he wanted to tell the story.

Now this time, this is the most relaxed I had ever seen Sly because he had so much confidence in the preparation and the enthusiasm that Patrick Hughes had, and he just took a huge step back. He let Patrick just run with it, and we got a chance to hang out and joke around more on this movie more than the other two. Patrick did an amazing job.

I think having the younger crew, too, creates an interesting dichotomy in this story that we didn’t have before, both in front of and behind the camera. I think in some ways having this new, young director in charge of this whole thing is really the heart of that in a lot of ways. Ultimately it really boiled down to Sly seeing the meticulous preparation and the passion and enthusiasm for the project. Patrick was always the first person to come to Sly and say, “You know, I think we need a one-liner in there.” Sly and the guys would always be spitting out some crazy, funny one-liners and a lot of them worked. We weren’t afraid to do that because we were so much more relaxed on this one and we didn’t have as much of a chance to do that on the other two.

DS: What’s it also like getting to add new veteran performers to your cast this time with Harrison Ford, Wesley Snipes, and Mel Gibson coming aboard? It seems like you just keep adding talent upon talent that really know their way around an action movie.

RC: Well, the first film was really a surreal moment to first get involved with such a crazy cast. Now with each and every installment I watch it grow and it just keeps sustaining that surrealness. I mean, really? Han Solo? Blade? Who else can we add? How about William Wallace? It’s just surreal to get to work with these guys in the same place at the same time and to get to know them.

And what’s fun for me as a relatively new guy to this industry is that there isn’t a better bunch of guys that you could really learn this from. If you’re trying to learn the ropes, it’s key to watch these guys first hand and realize why they’ve become the most successful in their business for as long as they’ve been successful.

DS: As someone who used to fight yourself, were you excited to see Ronda Rousey and Victor Ortiz get added to the cast this time out, and what was it like getting to work with them?

RC: Yeah! It’s always interesting to see that happen. I was really aware of Victor when he was boxing at the level he was at and I used to watch him compete all the time. Guys from individual combative sports like Ronda and Victor making that leap that I made about 11 years ago is nice because you never know what to expect or how they’re going to handle it. But they did a great job. They were both amazing.

DS: Did you ever give either of them any pointer now that this was your third go with the series or did they ever ask you for any advice?

RC: No. I mean, that’s not really my style. I don’t ever assume to know anything. (laughs) I just kind of stay out of the way, and I told them to do their thing.

I did get to spend a little time in the gym with Victor and go through some workouts, which was intense, but fun. And I know that he got on the mat with Ronda and he was sparring with her while she was training for a fight while we were in Bulgaria. I don’t think it went as well as he hoped it would have gone. (laughs) Victor got thrown to the ground a couple times. But overall we had a blast, it was fun, and they did a great job.

DS: I have to go back to the scene where you and Dolph Lundgren are driving around in a tank, because I’m going to assume they wouldn’t let either of you drive a tank…

RC: (laughs) You would be right.

DS: …and that the inside of tanks are really small, so what’s it like looking at that scene and seeing you guys in there? It has to be a cool feeling seeing yourself doing something you wouldn’t normally get the chance to do.

RC: You know, to be honest, we did have real tanks on set, but I know neither one of us could ever fit inside of a real tank. That is definitely not a big man’s job. I tried to get down in the hatch and I could get down maybe to my shoulders. I tried to get my shoulders to squeeze in enough to get down in there, but driving and actually shooting from a real firing position was something that I honestly don’t think I could ever do. And I GUARANTEE you can’t get Dolph in that thing. (laughs) So what you see obviously works for the film but could never really happen, and we had a lot of fun with that scene. There’s a ton of stuff that we cut from that because we were just joking around. I think a lot of that was funnier than what made it into the film, so I hope that comes back in the future. In reality, I know that’s one thing I could never be able to do.