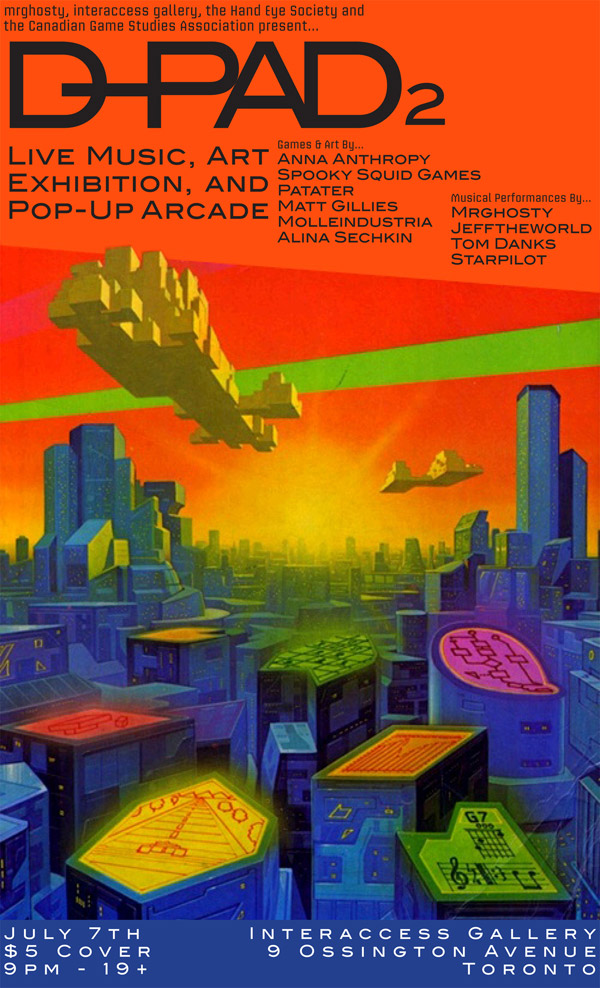 Most gamers are familiar with the D-PAD. Those four trusty arrows have been around almost as long as the controller and the four-letter abbreviation is itself nearly synonymous with gaming. As a lifelong gamer, Skot Deeming is well aware of that history, but he also thinks we’re ready for a newer definition. The local media artist is currently organizing a series of game culture events that blend live musical performances with arcade sensibilities and a few actual arcade cabinets to encourage game enthusiasts to embrace new forms of play and interactivity.

We spoke with Skot (who also performs game-inspired music under the stage name mrghosty) prior to DPAD 2, the second such event he’s hosted in Toronto. We’ll let Skot explain the acronym – all you need to know right now is that the showcase kicks off at 9:00pm on Saturday, July 7th at the InterAccess Electronic Media Arts Centre (9 Ossington Avenue) – but you can keep reading to find out more about DPAD and the local game artists that make it possible.

Dork Shelf: Let’s start simple. What is DPAD, and why should people be looking forward to the event?

Skot Deeming: DPAD (which stands for Directions in Play/Art/Design) is a series of events at InterAccess here in Toronto. It’s a showcase of different forms of creative works borne out of gamer culture, whether that’s indie games, art games, or live music using video game consoles, hardware, and other modified gear.

DS: How did you come up with the concept for DPAD? What inspired you to bring all of these disparate artists together?

SD: It was fairly organic, actually. Prior to moving back to Toronto for Graduate School last fall, I had been curating game art shows and culture events in Winnipeg. I’ve done shows in bars, art centres, and even the Winnipeg Art Gallery, so for me DPAD is a continuance of work I had already been doing. My goal is to broaden the conversation, which for me means making connections between games and works others may not have considered.

DS: For those who might not understand the term, what, exactly, is a Pop-up Arcade?

SD: We usually think of arcades as permanent spaces. A pop-up arcade is an arcade that pops-up then disappears again. We take a space, convert it into an arcade for an evening, then tear it down. DPAD is a pop-up arcade in that it’s a one-night event full of games and then it’s over.

DS: What would you want people to take away from Saturday’s show?

SD: I want people to see all of the creative activity that orbits ‘mainstream’ video game culture. An increasing number of individuals are making games, modifying technology, making music, and making art based on game cultures and aesthetics.  It’s quite remarkable, so I want to examine the work these people are producing, take it out of web forums and our communities and show it to the rest of the world.

DS: Is there more of emphasis on Play, Art, or Design? Who would you say is the target audience for DPAD?

SD: I’d say they’re all interlinked. When you’re talking about an interactive medium [like gaming], the cultures that derive from the medium are all wrapped up in one another. For me, the target audience for DPAD is as wide-ranging as the program for these events. It’s for artists, enthusiasts, neophytes, and people who like to dance, play or encounter unique digital art that they otherwise might not know about. Making these events open, engaging, and accessible to everybody is something that’s very important to me.

DS: The first DPAD event took place back in February. How would you describe the response to that show? Are you doing anything different the second time around?

SD: It was very successful. We hit capacity within an hour of opening the doors. It was a pleasant surprise, being my first event in Toronto. People seemed to receive the work well, and I feel like there was something for everyone who attended.

This time around, it’s a whole new line up, with new musical performers, new games, and new artists. I want to make sure that each DPAD has a unique flavour and offers different conversations about the various creative practices revolving around gaming culture and the different kinds of play they can enable.

DS: You’re partnering with the Hand Eye Society to put together DPAD 2. Is it easier to put on this kind of show in Toronto, where there is a larger video game community?

SD: It’s certainly easier in terms of the larger local talent pool. Organizations like Hand Eye makes getting the word out a little easier, too. The game, chip-music, and art communities in Winnipeg were much smaller, but the events were always well attended and well received outside of those communities. We had a lot of fun together. I have always had the support of great people who gave me some great opportunities and have been really helpful and enthusiastic in both cities.

DS: DPAD 2 features live musical performances and interactive arcade exhibits. With so much going on, how much of a challenge is it to organize the show and prevent it from descending into chaos?

SD: Throwing an event of any size and scope always has its challenges, but I’ve been doing it long enough now that I know how to plan it out.  Thankfully, the staff at InterAccess is great. We start setting up days in advance, and we rely pretty heavily on a group of volunteers. I credit the success of the first DPAD largely to the volunteers. There were over a dozen of them and without them I don’t think it would have gone as smoothly as it did.

DS: Does DPAD appeal more to fans of live music or fans of games? Does a show like DPAD encourage people to branch out and explore new forms of artwork?

SD: I hope it’s a mix of both.  The music itself is composed and performed with a lot of game technology. I want to expose game players to new forms of musical performance and get the chip music fans engaged with art games. I take a holistic, global view of DIY gaming cultures when programming DPAD. I think the potential for it to resonate with different groups of people is greater that way.

DS: Anna Anthropy is the featured artist for DPAD 2. Could you talk about her involvement with the show? What makes her work so important?

SD: I’m a huge fan of her work. She’s done a great deal to promote discussion around games as creative practices outside of economic concerns. Her games are engaging and decidedly non-commercial. For DPAD 2, I’ve chosen to show her game Keep Me Occupied, which was made in support of the Occupy movement and was playable on the Oakutron free arcade cabinet. The game plays out as a metaphor for protest cultures and how the legacy of protest and labour helps current movements. Over time these cooperative actions help us attain our collective goals.

I think her work is important because games are new ways for DIY creators to communicate and her work is emblematic of that. Her game Dys4ia is an art game that deals with her personal experiences as a transgendered person, and while it uses low-fi graphics and sound, it’s very moving and communicates the grief and frustrations she’s experienced. It illustrates how games can communicate an author’s thoughts and feelings to us in new ways, and how game creation has been opened up to ‘non-experts’ through software tools like Stencyl, Scratch and Game Maker.

DS: As mrghosty, you’re also one of the musical performers at DPAD 2. What personally inspires you musically, and how does that relate to your work with video games?

SD: My work as an artist uses game tech for purposes other than gaming. It started with modded DDR pads while I was VJing at clubs. The controllers were a way of making the visual experience more interactive for the people dancing, enabling them to control the video mix while on the floor. From there I started using two Sony PSPs to DJ, sort of treating them like ‘decks.’

I’ve been a fan of chip-music since the scene started over 10 years ago. As a member of a generation that remembers game music as low-fi bleeps and beats, there was something that really resonated with me. I find it interesting now that there are kids making chip-music who didn’t even grow up with a Nintendo or Game Boy. They’re making this low-fi electronic music because they think of it as a legitimate musical aesthetic. I think it is as well, of course, but I think people make different connections. Often the chip-music scene and the indie game scene exist as this separate-but-together creative community. I want to bring them together, particularly because I think there are opportunities for creative collaboration between the game makers and musicians.

DS: How do music and games intersect creatively, and what could the two media learn from each other moving forward?

SD: That is a big question.

The best thing we can do is use both to make better works. Games are an audio/visual as well as an interactive medium, and people have been combining these elements for years.  Shawn McGrath’s DYAD is a great example. The bit.trip series by Gaijin Games integrates chip-music and gameplay in an excellent way. More games like those would be great, and I think that gaming platforms are also great tools for music creation. There’s tons of software both on the homebrew and the commercial side that re-task consoles as music making devices. I love that I can compose music on my PSP or Game Boy when I’m commuting.

DS: Are there any other artists you’re particularly looking forward to on Saturday?

SD: Spooky Squid‘s Night Balloonist is a four-player game that uses a custom one-button controller. Minimal Mario by Patater is a brilliant ROMhack of the original Super Mario Bros. that distills the graphics down to the most basic elements. Leaky World is a game based on Julian Assange’s Conspiracy as Governance essay.

I’m also debuting the work of Matt Gillies in Toronto. I showed his game Murder Command at the Winnipeg Art Gallery for Nuit Blanche, and I’m really excited to show it here. It’s a Kinect Augmented Reality Game that uses the controls from Missile Command, but instead of saving pixelated cities you have to stop missiles from hitting people in the room. With so many shortsighted conversations on the nature of violence in video games in the popular media, it’s nice to see a work that addresses that, even if it’s slightly satirical and tongue in cheek.

DS: Finally, will we be able to look forward to a DPAD 3? What are your plans for the showcase in the future?

SD: Once DPAD 2 is done, I’ll start looking to the fall to start programming DPAD 3 and DPAD 4 (which will be towards the end of the year). I have some ideas – all new performers, including maybe some folks from out of town – and of course there are the games and the art.  I really want to showcase ROMhacks and bootlegged games. It’ll give me an excuse to dig out my collection.

I’m actually writing my Master’s Thesis on the PSP. When it nears completion, I’d like to take all the work I’m writing about and showcase it [at DPAD]. There are a few homebrew PSP developers in town whose work I’d love to give some exposure to.

See more of what Deeming is up to on his blog: ghostynet.wordpress.com