It’s an early morning part way through TIFF and Channing Tatum, Mark Ruffalo, and Steve Carell have assembled in the private alcove of a wine bar with plenty of coffee as they continue their promotional duties for their film Foxcatcher (opening in Toronto and Vancouver this Friday). It’s a decidedly serious film for the trio of actors, and watching the film one wouldn’t get the impression that these three men could ever be friends, but before even sitting down in the room with them they were already cracking jokes and making fun of each other like friends.

In the latest film from director Bennett Miller (Moneyball, Capote), Tatum, Ruffalo, and Carell play out a tragic true story between three men set in the world of Olympic wrestling. Grappler Mark Schultz (Tatum) accepts the offer of billionaire industrialist John Du Pont (a nearly unrecognizable Carell) to come and train on his farm for the 1988 Seoul Olympics, leaving behind the tutelage of his older brother and long time coach, Dave (Ruffalo). With an almost limitless chequebook (but little professional experience) Du Pont takes Mark under his wing and assembles a successful wrestling squad with the volatile young man as their figurehead. Constantly driven to be the best and willing to spare no expense to be recognized, John asks the increasingly obstinate Mark to bring Dave into the fold, leading to an even more dangerous and complex situation.

With Carell playing largely against the comedic type that he’s known as, Tatum branching out into more serious roles, and Ruffalo inhabiting a character that pretty much take control over the second half of the film, each actor has a pivotal and complex role to play in this story of three men who have vastly different definitions about what it takes to be the best.

We chatted with the guys about what drew them to the relationship between the Schultz’s and Du Pont, their personal experiences in the wrestling world, and what – if anything – they related to in their characters.

Channing Tatum: We’re just going to both look at Steve on this one because he’s so good at answering these questions. (laughs)

Steve Carell: (laughs) Well, the first part of your question in terms of what drew us to it was that it was a really complicated story. When I first met with Bennett, we sat down and discussed this triangle of a relationship. As soon as you start to figure out any aspect of the relationship between two of the characters, the other character will come into play and completely change the dynamic. It was always shifting and always changing. That was intriguing to me because that’s a hard thing to pin down and an even harder thing to understand what might have actually been going on between these three men.

CT: For me it was the fact that this was a true story. Du Pont had probably over fifty athletes at the farm, and for someone who didn’t know that world – he wasn’t really an athlete himself, he wasn’t a coach – to have people just flock to him is astounding to me. There’s a lot of crazy things that happened on that farm, and I’ve seen footage from people who had archival footage from back in the day. It was like the wild, wild west in that place. The idea of all these guys congregating around this one person who had little to no professional experience in the sport is just a fascinating starting point for me. Thinking about what that would look like on screen was a rabbit hole I really wanted to go down, I guess.

MR: For me it was the true story, and it was this story that had all this intrigue around it and all this salacious speculation and mystery. Nobody really knew what happened there. There were some who might have known, but no one ever said much. It was ripe for a Greek tragedy. Steve likes to call it a Greek tragedy, and it really is in a lot of ways.

And this relationship between these two brothers is so complicated. There’s so much love and history there. It’s funny because all of them are searching for love, really. I think that’s an eminently interesting story and very universal. 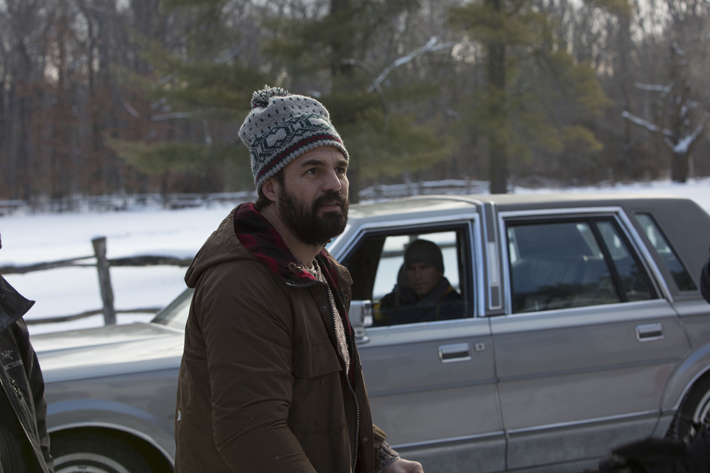 Mark, your father was actually a champion wrestler, and you did it yourself for a long time, so what’s it like coming back into the sport, but not in a way that you would have previously experienced?

MR: Yeah, I started wrestling in the seventh grade. I was probably twelve, and I wrestled until my junior year of high school. That was a huge part of my life growing up. My father was a three time state champion wrestler. It was a way for me to relate to my dad that was tangible to me. My dad was a business man, and he was always really focused on that. I always saw wrestling as a way to build a bridge to a relationship with him. But when I got in there, it became really apparent that it’s a very singular sport. I mean, there’s a team, but essentially you’re by yourself. It’s very competitive. Every week I had to wrestle against somebody and beat them in order to wrestle on first team. There was always this constant, impending sense of someone coming in and taking away your chance to wrestle.

It was a very particular and shocking kind of culture to go into as a young person. I had to always cut weight. I was cutting ten to fifteen pounds at a time to make weight when I was only thirteen and fourteen years old. But what I learned was discipline. That’s an enormous part of it. And there’s a way of relating in the world in a physical sense that these guys have. It’s a whole unspoken language, and it’s a nuanced as any language is. It has all these different dialects and styles.

I was aware of that, and I never saw that captured in a movie before now. It’s a sport that’s as old as mankind. This sport is pre-language, in a way. It’s a mysterious thing. So to go into this world with someone like Bennett who understood that was great. We didn’t even know what we were doing until we all got there. It was always sort of an experiment. We were learning as we were going along. Learning with these wrestlers was a seven month process that had its own life to it and its own language.

So, you know that quietness that’s in the movie? That’s also in wrestling. There’s a lot of time where you’re alone and quiet. And it’s not humorous. They’ll goof around when they have time together, but there’s a seriousness almost all the time under all the proceedings. It never stops. There’s no time off in wrestling. It’s a year round thing. Or at least that was my experience of wrestling, and I think the movie captures that quite well.

So if Mark had this experience going in, what was it like for you guys to have to get into these characters? What was it like having to don a singlet?

SC: (deadpan) I loved wearing my singlet. (everyone laughs)

CT: I’m wearing mine, still. It’s underneath this right now. (laughs) It’s a humbling experience to wear one, I promise you. The first time you put one on you just look down at yourself and think, “Um, okay.”

MR: (laughs) “How do I make myself look bigger and less goofy? Should we lengthen it?” There’s no way to make it look good.

CT: But wrestlers know that! Wrestlers know that it looks funny. That was one of the first things that I talked to one of the guys about. One of the guys I wrestle in the movie actually wrestled in the Olympics before we shot. He just said to me, “Look, the outfits are ‘whatever.’ I don’t know why we can’t make ‘em any cooler, but we just can’t.” They’re very aware of it.

MR: They don’t leave much to the imagination.

CT: But the last thing that you’re thinking about when you’re out there just getting your head driven into the mat is your outfit. I can promise you that. It becomes a non-existent thing. You’re just out there trying to survive.

SC: I’d like to see Major League Baseball make everyone wear singlets for every game.

MR: That would be cute.

I’d be terrified every time someone went to bat if they were wearing those.

SC: But you would watch the game, wouldn’t you? 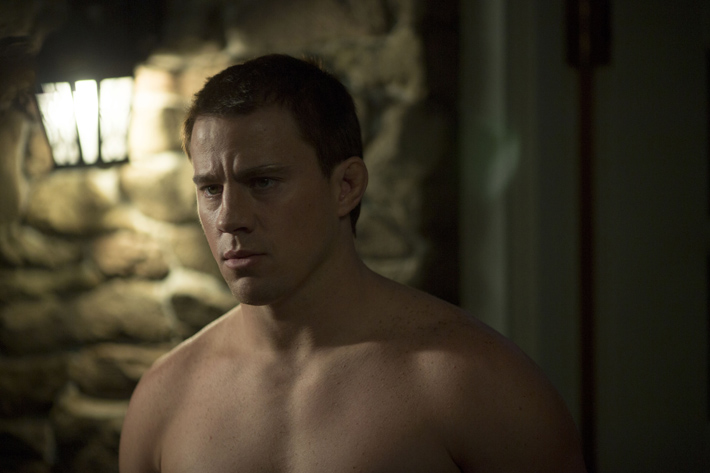 These are very hard characters to play, but was there anything you could personally relate to with these men?

CT: I’m willing to push myself pretty far, physically and mentally, often to the point of break. It’s a very exploratory process when you literally don’t feel like you can go any further, and then you just keep going and asking yourself if you can do one more rep, or run just ten more seconds. Then you do. The body is an unbelievable machine, and it’s really the mind that gets in the way, especially in Mark’s case. I think Mark is an interesting example of someone who’s emotions were always getting in the way, but when his mind was right there was almost no one on the planet that could touch him.

MR: The brother relationship was something I was really into. It was important to me that I explore that, and like I said I also grew up around it and with a father, so playing someone who was a father in that world was also something I felt like I could relate to in some way having seen some of that first hand.

SC: Honestly, for me, nothing. I really couldn’t relate to John Du Pont, probably thankfully. I didn’t go into this trying to find out anything about myself, and thankfully I really didn’t. I also never approached the role as this heavy thing. I mean, I’m mostly known for comedies, but I always just saw this as a good thing, or at least a potentially good thing. I wanted to be in the company of people like this, but I never delineated between this and comedy. I approached this in the same way. You don’t take yourself seriously, but you take the work itself seriously. I approached this in the same manner that I approach everything. It was exciting and it wasn’t the type of film that I normally get cast in. It was an intriguing challenge. 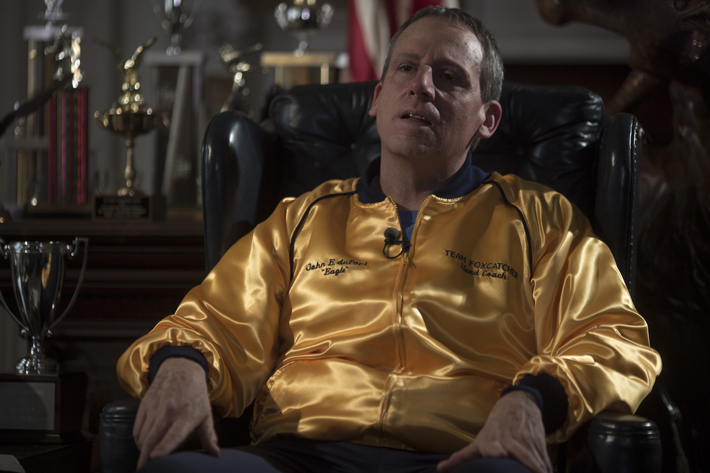 But there is some humour in the film and within the character, but it’s all the kind of nervous laughter that people tend to get when they’re confronted with something unusual. Are you ever surprised by what people find funny in the film?

SC: We’ve only actually seen the film a couple of times with an audience, and that’s one of the things that always surprises me to a certain extent. Early on when we talked, Bennett and I agreed that there were ridiculous elements to this all the way through, and that some of it was absurdly funny. Whether or not it would elicit laughter, I didn’t think about. We certainly didn’t think about it while we were doing it. It struck me the same way. There are moments that are so uncomfortable that you feel compelled to laugh. I think sometimes people start laughing without knowing why they’re laughing, or they’re just laughing out of some sort of way to relieve the tension.