Jurassic Park is cinema’s version of an apex predator.

Spielberg’s 1993 classic dazzled audiences and conquered the box office on its way to being recognized as a generational event. In the decades since Jurassic Park stormed multiplexes, not one of the series’ many sequels has come close to matching its exhilarating highs.

So now it falls on director Colin Trevorrow to get the series back on track. His new film Jurassic World Dominion is the “final entry” in the current trilogy, so there’s plenty riding on it. If I had to bet on a movie making good on the series’ potential, JWD looks like a safe bet.

Without a doubt, JWD is the most ambitious and action-packed Jurassic Park flick since the original. And yet, the stakes in a Jurassic Park movie have never felt lower. 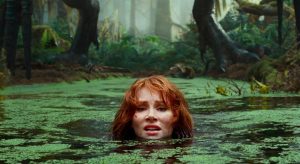 The film picks up four years after the events in Jurassic World: Fallen Kingdom. The animals that survived Isla Nublar’s destruction escaped captivity, and now they’re free in the wild. As the dinosaurs breed and migrate around the globe, their presence fuels an ecological crisis.

Nobody agrees on how to handle the unprecedented situation. Some people want to preserve the dinos, some want to let them die off, and some are using the chaos as an opportunity to profit.

Owen (Chris Pratt) and Claire (Bryce Dallas Howard) are officially a couple now, and they’re secretly raising Maisie (Isabella Sermon) in a cabin in the woods. Word is out that Maisie is the product of genetic engineering, and numerous parties want to bring her in for study. A gang of poachers discover Owen’s whereabouts, kidnap Maisie, and ship her overseas to an evil company called Biosyn Genetics.

Meanwhile, Dr. Ellie Sattler (Laura Dern) is sent to investigate swarms of giant locusts ravaging farmland across the United States. It’s only a matter of time before these pests wipe out the country’s food supply. It turns out these super-locusts may have been engineered by the eggheads at Biosyn. And it just so happens everyone’s favourite chaos theorist, Ian Malcolm (Jeff Goldblum), works there too.

Malcolm invites his old friends Ellie and Alan Grant (Sam Neill) to Biosyn headquarters while Owen and Claire show up, hot on Maisie’s trail. The Jurassic Park old-timers cross paths with the modern-day crew at Biosyn HQ. And to no one’s surprise, dinosaurs start running amok. You know the vibes by now.

On paper, JWD has all the ingredients for a sure-fire hit; an outstanding cast, beloved mythology, an emotional score, and dazzling visual effects. That’s the recipe for a thrilling blockbuster. But time and again, JWD comes up short in crucial ways.

This movie clocks in at two and a half hours, and yet it fails to flesh out its characters and develop meaningful relationships. The half-baked script underserves both generations of Jurassic Park stars. They come across like shells of the characters fans enjoyed in past films. Series legend Alan Grant has little to do but show up for nostalgia’s sake. You could cut him out of the movie without meaningfully changing the story.

Laura Dern’s Ellie Sattler is the only character who transcends the wonky script. She’s the heart and soul of the movie who infuses every scene with emotional weight. Every time Ellie shows up on screen the movie becomes 250% more enjoyable. JWD left me wishing it scaled back the giant cast to let Ellie take the lead.

JWD features the series’ second-best premise. Humans play god, lose control of their experiment, and face an existential threat. That’s the setup of every Jurassic Park movie, true. But this time the problem isn’t self-contained on an island (or a few blocks in San Diego). For the first time in the series, the dinos are running rampant and all of humanity is on its heels.

I would happily slap down money to watch a movie about dinosaurs overrunning the planet. JWD starts off taking advantage of this expansive premise but then narrows its scope until the story feels claustrophobic. By the time we reach the third act, JWD mimics earlier films – everyone ends up trapped in a nature reserve with rampaging dinosaurs.

Under Trevorrow’s watch, character development and coherent storytelling take a backseat to white-knuckle action. JWD is the most action-packed entry in the franchise, and the series’ visual effects never looked better. But I’ve never cared less about this world and the people inhabiting it. Trevorrow hits all the beats you expect from Jurassic Park films, but the end result lacks emotional texture.

He pummels your senses with so many chaotic action sequences that they lose their lustre. Trevorrow doesn’t slowly build-up to his oh-my-god moments so much as unleash them in rapid succession. While technically impressive, the action beats fail to create any sense of magic or wonder. There’s no sense of tension, and the emotional payoffs don’t feel earned.

The films that stand the test of time challenge viewers. They put the audience through the wringer in order to achieve emotional catharsis. JWD doesn’t dare to take risks or challenge the audience. It wants everyone to have good vibes all the time, so it functions as a positive feedback loop.

JWD prioritizes fanservice over telling a cogent tale with actual emotional stakes. It recycles characters and sequences from previous films, even when they don’t make sense plot-wise. Jurassic World Dominion lives or dies based on the amount of goodwill you carry over from the previous movies.