This review originally ran on November 5th, 2014 when the film debuted as part of Hot Docs Doc Soup. It is re-run this week as it starts a proper week long run at The Bloor Hot Docs Cinema this weekend.

Produced for the PBS series The American Experience, Last Days in Vietnam moves with a gutwrenching intensity that few talks that centre around talking head interviews can muster. When placed in comparison to Ben Affleck’s fictionalized work in Argo, the attempts to save thousands of soldiers and diplomats in the waning days of the Vietnam war, this extraction feels like much more of a heartbreaking and stressful undertaking. It’s one thing to try and save a handful of hostages from a hostile country and environment. It’s another thing to attempt to extract a massive chunk of a country’s population and an entire military force at the same time.

Following the 1973 Paris Peace Accords that called for a cease fire in Vietnam, the country remained in a state of quiet unease. U.S. troops remained and life went on for a time as amicably as possible. Then, shortly after the resignation of Richard Nixon due to Watergate, North Vietnamese troops felt emboldened to make a run on Saigon in 1975, causing an out of control panic. With ineffective leader Gerald Ford in charge – stymied by American and congressional attitudes that stopped him from sending troops or giving any more aid money – a panic set in among US and South Vietnamese troops who had a limited amount of time to escape the country and a war they had no chance of fighting and winning. 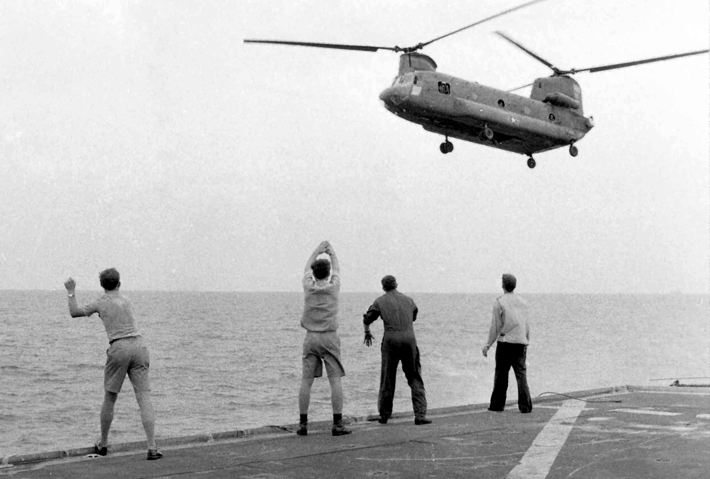 Director and writer Rory Kennedy (Ethel, The Fence) makes her film into a fast paced balancing act, cutting between archival footage and sometimes uncomfortably candid interviews with those who tried to navigate the military and social quagmires of the region. From heads of state (including the important appearance of Henry Kissinger), to American infantrymen and those pained by having to leave their country, all sides of the withdrawal of troops and personnel get examined in great detail. In many ways, it takes on the form of a direct address oral history of the fall of Saigon, but with much more immediacy. It flows like a page turning book, but all of the interview subjects bristle with emotion; haunted by memories none of them seem able to shake.

Stories about how the song “White Christmas” was used as a harbinger of impending doom and how Vietnamese helicopters had to be shoved off of air craft carriers to support the demand for people escaping in a hurry are chilling. But most importantly, these stories never take a side on the validity of the war from an American perspective. There’s no right or wrong here, but rather a bipartisan look on what it actually means to lose a war and the psychological traumas that come from being forced to run for one’s life.

It’s a work of great pain and frustration for those involved; a mission that would break up families, strand millions who couldn’t escape, and cause widespread chaos for years to come. Best of all, the stories – both personal and professional – come from subject who have unique tones and perspectives. They have different opinions that they aren’t afraid to voice, but the scariest thing about Last Days in Vietnam comes from how perfectly all of the stories line up. No one seems to be lying, and everyone seems in agreement that mistakes were made on a grand and terrifying scale, even before events were out of everyone’s hands. It’s a powerful work, and possibly the definitive documentary made about the blurry timeline that led to the actual end of the Vietnam war.