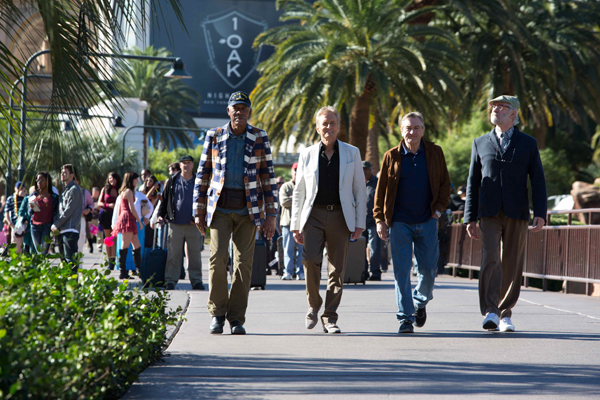 If one were to quiz me about anything that I saw in the geezers in Vegas comedy, Last Vegas, I would probably fail. Over two weeks after having seen the film, and I can’t remember a single memorable punchline or gag. I remember the plot and who everyone was but not a single reason to care about anyone involved. I only remember two things from the experience: the first was that I didn’t laugh a single time at Jon Turtletaub’s film and openly winced through most of it. Second: I made a really tasteless joke on the way out of the theatre that won’t be repeated here about how bad it was; not only because I feel awful about it now, but because there’s no way a film so forgettable in every way should have that good of an insult that good attached to it.

Four childhood friends who grew up in Brooklyn in the late 1950s are on the verge of getting back together for a bachelor party weekend in honour of well off best buddy and chronically single Billy (Michael Douglas). There’s Archie (Morgan Freeman), currently living in Jersey with an overly protective son (Michael Ealy) who stays to make sure dad doesn’t have another stroke. Sam (Kevin Kline) wastes his time away in Florida with a loving wife who has given him free reign to cheat on her on his boy’s night out in hopes of rekindling their sex life when he returns. Then there’s Paddy (Rober De Niro), a widower who wants to be left alone to continue mourning in peace, only coming after being lied to by Archie and Sam. Billy and Paddy haven’t spoken to each other since Billy declined the opportunity to speak at the funeral for Paddy’s wife, a long time mutual friend. Paddy also never knew that he only had his wife because Billy walked away from the chance to be with her, and now a kindly lounge singer from a crappy bar (Mary Steenburgen) looks to get between the already very tenuous friendship.

What I just described actually sounds like a decent idea for a movie now that I read it back to myself. There’s probably some decent dramatic weight and thoughtful, age appropriate comedy that can be mined from such a premise. Turtletaub (National Treasure , Phenomenon, 3 Ninjas) has no such desire for character subtlety and neither does the script from Dan Fogelman (Cars, Fred Claus, The Guilt Trip). Since these characters are in Las Vegas and they’re old, Screenwriting and Direction 101 dictates that they have to indulge in a tired fish-out-of-water scenarios where these unhip old folks struggle to adapt to their ribald surroundings. There are blow out parties, VIP service in the club, contrivances so big kidney stones could pass through with ease, and worst of all, no funny jokes. At one point resorting to having the guys judge a bikini contest hosted by LMFAO in a scene that reeks of flop sweat and complete creative desperation all around.

The weak and tired jokes, what few they are, wouldn’t be humorous coming from 14 year olds, let alone septuagenarians. Is it funny to just give someone a Viagra and a condom and tell them to have a good time? Possibly within a proper context, but when that very moment happens to Kline’s character t feels slimy, forced, and unearned.  Is it funny to watch Morgan Freeman discover the joys of Red Bull and Vodka for the first time? How about the guys not being able to identify who 50 Cent is? What about their handler for the weekend (Romany Malco, who has deserved better and never gotten it since his appearance in The 40 Year Old Virgin) bullying around a young bro by convincing his elderly charges are actually mob bosses? These are all jokes that could be funny, but delivered with all the sincerity of a salesman who isn’t particularly good at his or her job.

And that lack of effort isn’t even the fault of the actors involved because it’s clear they are sticking to the words on the page as written and not given much room to go off book and let the film feel alive and organic. Why Turtletaub would choose to straightjacket a cast this talented to a script this lame doesn’t make much sense. De Niro and Douglas are ostensibly the leads, and while both can be very funny people, they are given the straight-man roles because of their diametrically opposed characters. A movie about these two could have only been interesting if it was a drama and no one else was around them, but since there are so many potential shenanigans to get up to, everything about their relationship is stunted. As for Freeman and Kline, they’re both good sports, but they’re firmly relegated to the status of comedic relief and voices of reason whenever needed. Their subplots and efforts betray their talents as actors.

Maybe Last Vegas somehow inspired a late onset hangover in me that wiped my memory of the whole affair. I can’t say that I minded because I really remember disliking it and feeling eerily uncomfortable around it. Maybe the new saying should be, “What happens during Last Vegas, stays in Last Vegas.”