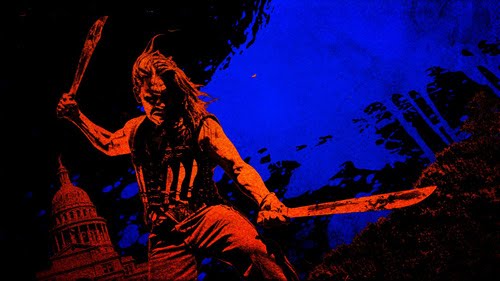 Move over Stallone, there’s an even older, buffer action star on-screen this summer, and this one’s connected enough to get Steven Seagal in his movie. At 66, Danny Trejo has two years on Sly and has appeared in almost four times as many films. Despite having one of the most recognizable faces in Hollywood, this is the first time Trejo has played the lead role in a theatrical feature. He’s appeared in just about every Robert Rodriguez movie (always as characters with knife-themed names) but the idea for Machete has been gestating since 1995 when they were working on their first collaboration, Desperado. In my opinion, Rodriguez should have made this movie 8 years ago instead of Desperado’s dismal follow-up Once Upon a Time in Mexico. Machete actually has a lot in common with the messy conclusion to the Mariachi trilogy except that its overt sense of humour makes us forgive the jumble of characters shooting their way around a ridiculous plot.

Many of you probably saw the fake trailer for Machete back in 2007 when it preceded the Rodriguez/ Tarantino directed Grindhouse double bill.  It was the only trailer to make it onto the DVD release, Rodriguez thought it would remain a three minute teaser of what could have been until fan demand made him think otherwise. I really wish he had carried on the old, beat-up print aesthetic of the original trailer and Grindhouse movies. Not only would it have made it feel like more of a continuation of that cool project, but I’m sure this process is so old hat by now that an intern at Rodriguez’s special effects house could have completed it in an afternoon.

Releasing this film earlier also would have saved it from being compared to last year’s pitch-perfect blaxploitation throw-back, Black Dynamite. Machete could have been “Mexican Dynamite”, but they forgot the fuse. Rodriguez jumps right into the killing and violence and concentrates mostly on that aspect the whole way through instead of playing more with aesthetics and humour like Black Dynamite did. Of course the jokes are there, for example when a doctor mentions that the large intestine is ten times longer than the person’s height, we know this will be gruesomely illustrated, but the timing is off as it follows the doctor’s comment a little too closely. Again, the set-up is there when one of the bad guys pukes at the first two instances of violence he witnesses, which is hilarious, but they never come back to it, even when he is present during the death of dozens in the final shoot-out.  For me, the biggest laughs came from some of the observational dialogue between two low-level, unenthusiastic henchmen (“I’ve been watching the boss lately and he’s kind of a jerk”), but I still felt as though a lot of jokes were skipped in favour of more over the top action and gore.

I don’t know if Latino culture ever had a cinematic equivalent to the blaxploitation movement, but if they didn’t it seems like Rodriguez is trying to create one 30 years too late. The ‘plot’ is based around border control and animosity towards Mexicans north of their border. Many of the jokes are extremely racial and would be considered highly offensive were the film not written and directed by a Mexican. I’m not sure how people will react to  Steven Seagal playing a Mexican, samurai sword-wielding villain with an accent that completes what may be his worst (or best?) performance to date. With films like this, it’s sometimes difficult to tell which aspects are supposed to be bad and which aren’t.

In addition to Seagal, the film also co-stars Robert De Niro, Jessica Alba, Michelle Rodriguez, Cheech Marin, Lindsay Lohan and Don Johnson (my hat’s off to whomever thought of adding “and introducing” in front of Don’s name in the opening credits). At first glance you may think this cast elevates it from the low budget, straight to DVD fare this film could have easily been, but I maintain that this is a b-movie cast with no real performances to speak of.  Yes, I’m calling De Niro a b-movie actor because I feel that’s the path he’s chosen to take with his career. In fact, the last time I saw him really create a character was in Jackie Brown, and I’m sure Tarantino’s role as producer had a lot do with De Niro’s involvement in Machete, even though he doesn’t seem too picky about his roles these days.

As you can see, they stuck pretty closely to the original trailer and even re-used some of the footage. Though Rodriguez says he had script completed in the 90’s, it still feels as though he wrote much of the film based around what he had included in the original trailer. Having Machete set-up by anti-immigrant politicians creates a tenuous backdrop in front of which he throws in elements of drug cartels, old rivalries and new romances. All plotlines and surviving characters predictably converge in one of the most inexplicable climactic shoot-outs since Way of the Gun.

Rodriguez actually takes a co-directing credit on this one along with his longtime assistant editor Ethan Maniquis. The end of the film promises not one, but two Machete sequels to come. I predict that if these actually come to fruition that it will be Maniquis taking sole directing credit while Rodriguez takes on more of a producer’s role. Since the often creative employment of his namesake weapon is reminiscent of similar uses in the Friday the 13th series, I don’t think a Jason vs. Machete movie is an unreasonable trajectory if the aforementioned sequels ever get made.

Interesting tidbit: Danny Trejo appeared as ‘Machete’ in Rodriguez’s Spy Kids trilogy and even though it’s the same character according to IMDb, I think that’s likely an oversight. What’s more likely is that Rodriguez never thought he was going to actually make Machete and was running out of sharp objects to name Trejo’s characters after, as I really don’t see how this decapitating maniac fits into a movie aimed at kids.