Caroline Dhavernas, who many will recognize from the prolific Hannibal, gets a new gig portraying Dr. Mary Harris (she’s the one who kills people). It must be a nice juxtaposition for the performer since it seemed as if no actor was allowed to smile on the set of Hannibal. Never, ever, ever. I mean, come on, there’s a man out there eating people!

This time Dhavernas gets to sink her teeth into the meaty role of Mary M.D., who’s permitted to exhibit a wide range of emotions ranging from joy to devastation. Mary’s a woman of many contradictions. She’s a dedicated ER doctor who works tirelessly to save the lives of any patients she comes across, and she does it while moonlighting as an “angel of death” killing terminally ill folks for cash. Recently divorced, Mary’s passionate about her two articulate and interesting young daughters, but how does her secret double life affect her time at home? She also has an unemployed ex-husband who’s like, “Really, Mary you got the kids fast food AGAIN?” and she gives him a look like, “Suck my dick GARY*.” As well she should.

The subject of assisted suicide for the terminally ill is a hot topic as of late and the show’s exploration of the subject matter through a strong, independent protagonist raises questions about the autonomy a human has when choosing death with the assistance of a medical professional. Mary has her own standards and ethical protocol when it comes to knocking off the terminally ill. One such rule is that the patient is required to die by their own hand. There are no injections on the part of the physician. It must be in the patient’s power. Unlike Dr. Kevorkian, Mary prefers to administer the deathly dose of mercy in a champagne flute filled with bubbly. Kicking back some Dom is way classier than some boring button on some dumb suicide machine, a point that is reinforced when Mary looks directly to the camera and exclaims, “HOW’D YOU LIKE ME NOW DR. K?!” ** 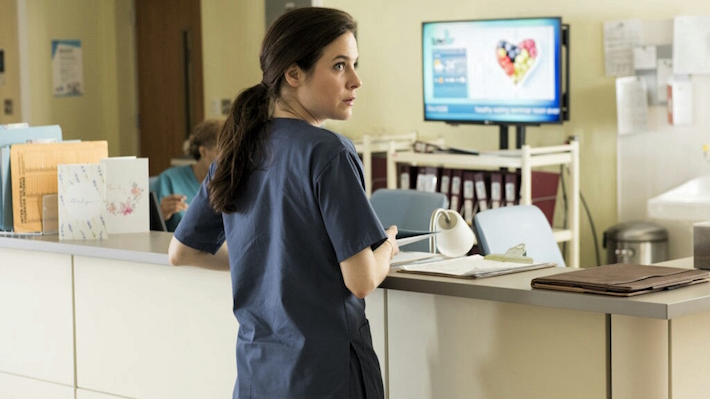 Mary is not alone in her mercy killing operation. Des Bennett, a side kick British hunk with pithy wit and an ex-addict’s dark sense of humour, is always in tow. His days of using are long gone, but he still visits his dealer to acquire the necessary drugs to knock off the sickly who wish to meet their maker. The dealer seems like he’s bad-to-the-bone in every sense, with a nefarious looking henchman and everything. Des wasn’t always running around with Mary squirting recreational/murder drugs into glasses of Veuve – he was once a legit doc himself – but apparently his addiction may have led to the revoking of his medical licence. I guess no one told him he could be like House and be a functional addict who treats humans like puzzles and doesn’t have time to actually perform surgeries because he’s too busy abusing his employees, ex-wives, girlfriends, bosses, and peers. (Just kidding. Dr. Gregory House M.D., in no uncertain terms, HAS NO PEERS). But perhaps our Des might be tempted to use again?

If Mary Kills People was literally a manifestation of its title, it would be pretty boring and SUPES depressing – just sick people asking to be released from the pain of their illness. Thankfully, the show is more than that, though it is a little odd that most folks looking to kick the bucket are fairly young and good looking. When we do see an older person, she’s smiling, happy, and resigned to her fate, and apparently fine with drinking the deadly cocktail on a bench in a public park on a sunny day, which is METAL AS FUCK because obviously when asked where she wanted to die she replied, “Outside where everyone can see me. Like maybe a kid will come over and think I’m just sleeping and poke me or something.”

Mary might be out living a double life, but that’s not to say she doesn’t have needs. She is a woman after all. She makes a bit of an “oopsie” when she ends up in bed with one of the dudes she was gonna kill (erp!). If you thought that was bad, without revealing any spoilers, the situation gets ever more clusterfuckish when the law comes sniffing around. She’s got to be savvy if she wants to avoid getting caught and put in the slammer.

Mary Kills People introduces very complicated subject matter with an equally complex and fascinating lead character. It falls into some primetime one-hour drama tropes from time to time, but the plot is solid, the characters are refreshing, and the acting is pretty decent.

*Mary’s ex-husband’s name is actually Kevin.  But he looks like a Gary. I also like to think that the fact that Mary and Gary have rhyming names is what lead to their divorce.

**This does not happen.