There’s no bracing yourself for what you’ll experience watching Midsommar. The latest collaboration between A24 and Ari Aster doesn’t care about award season nominations and making it onto best-of-year lists. The Hereditary director’s only goal here is to traumatize an entire generation of moviegoers.

Midsommar centres on a group of Americans who venture to a remote commune in Sweden to experience a summer solstice festival. Instead of nine days filled with music, food, and fun, they must navigate creepy locals, pagan sacrifices, and pubes in their porridge – I can’t stress enough that this movie isn’t for the faint of heart.

You may know Jack Reynor from Sing Street, Transformers: Age of Extinction, or from his cinema-obsessed Instagram feed. In Midsommar, Reynor plays Christian, the aloof boyfriend to the film’s protagonist Dani (Florence Pugh). Let’s just say that Aster takes the character on one wild ride.

That Shelf sat down with Reynor while he was in town promoting Midsommar. Everyone walked away from the press junket impressed with Reynor’s openness, thoughtful answers, and passion for film. If you ever run into him at an airport, bring up Ingmar Bergman and John Carpenter movies, and you may have a new friend for life. 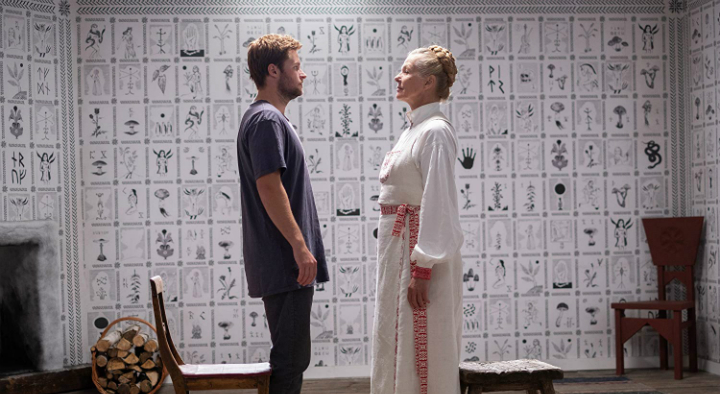 VICTOR STIFF – Aster is such a dynamic visual storyteller. His camera paints vivid pictures that give you chills. You’re one of the few people in the world who experienced this story on the page first. Since the thing we imagine is always creepier than the thing we finally see, can you walk us through how you felt reading the script?

JACK REYNOR – The script… the beauty that exists in the film does not translate into the written word on the page. Ari doesn’t write visual direction and references in the script. So, reading the script was like, “Oh my f*cking god, this is 150-pages of pure toxicity,” which was really interesting.

So that was what lead me to [Aster’s] shorts. I was like, “Who the f*ck is this guy, and what is he making?” I mean obviously there is a bit of description in the script, but it’s only when you sit down and talk to Ari, and you hear how he plans to execute his vision. For me, reading his shot list. It’s like, Ok, I can see how you’re going to take what feels like so incredibly toxic and emotionally draining and difficult, and you’re going to turn it into something that’s palatable for an audience through the use of visual language and film grammar.

This film was written as a way for Aster to process and move past his feelings after going through a breakup. As an actor and as a person, how have you grown after your time on this shoot?

That’s an interesting question, you know, because it does come from Ari’s own experience, yet, he doesn’t have to shoot that sex scene fully naked. And he doesn’t have to sit in a bear suit. But it’s about his own experience of a toxic relationship. So, all of us had to get inside his head and create and articulate his vision from the inside, which is incredibly demanding. And it’s a dangerous thing to be that far inside someone’s personal experience of toxicity, and it can be potentially very compromising.

That doesn’t only extend to Ari. That extends to any filmmaker that you work with. And some filmmakers use that as a tool to exploit actors and exploit performances from people, and I’ve witnessed that. That wouldn’t be the case with Ari, but that does exist. But this was a particularly intense film about an intense thing. And I realized very quickly, particularly having come off the back of a six-month shoot on a TV show where I was in practically every frame, that it was going to be an exercise in the practition of peak-mental health every day. And if I didn’t do that and Florence didn’t do that we were going to suffer as a result of it.

You’ll know from having read what Alex Wolff said about Hereditary, there was definitely a decompression period after being on that film for him and it was a heavy experience. It’s a difficult thing to process and walk away from yourself. So, for us, I particularly felt it was imperative that I was sleeping at night at least eight hours. I was cooking for myself, I was going to the gym every day, I was not just watching TV all the time. I was sitting down, and I was reading books and doing things to stimulate my mind and allowed myself detachment from the character and from the project. Without that, I think you’re getting into dangerous, dangerous territory.

Having done that almost jealously on Midsommar, I’ve brought it on to my subsequent projects. I’m now in a really good place with my approach. I’m almost like a monk about how I work now.

As a follow-up, Reynor was asked if he would let other performers that deep into his own headspace in service of telling a story.

That’s a good question. I think it depends. It depends on what you’re making. If I was directing something that was as personal to me as this is to Ari, if I was to direct something about my family, or if I was to direct something about a relationship I was in I would definitely urge, because I’m an actor, because I have the experience of being on the inside, I would definitely encourage responsibility from my actors and I would tell them you need to be on top of this, you need to look after yourself, you need to practice self-care while you’re doing this because it will be intense.

I don’t subscribe to the idea of a person throwing themselves into something and just letting it overwhelm them, and they basically become some sort of f*cking conduit for whatever awful thing it is they’re trying to exhibit or perform. I don’t think it’s necessary, in a lot of cases it can hurt a project and it can hurt a performance, and it’s just bad for you as a human being.

Reynor had some parting words for the press as he made his way to the door.

Glad you liked the movie. A24 will not be paying for your counselling.

Midsommar is now in theatres.