I pity the unsuspecting viewer who finds Midsommar sitting on Netflix’s splash page and says, “Why not?”

Midsommar, the follow-up to writer/director Ari Aster’s 2018 debut Hereditary is seven different levels of f#ucked up; a gruelling watch, featuring brutal violence that will even make gore-hounds’ toes curl. Aster makes his case as the next great horror auteur with a folk-horror tale that gleefully bludgeons viewers out of their comfort zones.

Aster doesn’t waste time getting to the dark stuff. He plunges his protagonist Dani (Florence Pugh) into tragedy before Midsommar’s credits even role. In a grim prologue, Dani’s bi-polar sister kills their parents in a murder-suicide. Overwhelmed by grief, Dani turns to her reluctant boyfriend Christian (Jack Reynor).

With their relationship fizzling out, Christian wants to breakup. He hasn’t found the courage to do it, and now Dani’s circumstances make dumping her even harder. But the clock is ticking. Christian and his bros already have a trip to Sweden lined-up after their classmate Pelle (Vilhelm Blomgren) convinces them to visit his hometown. Nobody wants a needy girlfriend tagging along, so, it’s the perfect time to cut ties. But showing a hint of humanity — or a lack of spine — Christian invites Dani along anyways.

Dani and Christian’s crew plan their trip around a nine-day festival in honour of the summer solstice. And this celebration is particularly special as it occurs once every 90-years. That means plenty of singing, dancing, and feasting under around-the-clock sunshine.

When the Americans arrive at the remote commune where Pelle grew up, things aren’t quite right. And it’s more than the 24/7 sunlight that makes things feel off. They find themselves in a bucolic village full of blissful residents. But the buildings stand at weird angles and they’re covered in creepy art and strange runes.

It doesn’t take long before “culture shock” sets in. The villagers must have watched Logan’s Run one too many times – they have a disturbing way of handling their elders. By the time visitors start disappearing, as a viewer, you’re in full-on Get Out mode. Once Midsommar divebombs into its grisly folk horror tropes, it already has you in its cold, harsh grip. What follows is a stomach-churning free-fall that’s as jarring as any film you will experience this year.

To steal a line from Bret Hart, Ari Aster is horror’s new “Excellence of execution.” He wields his ability to toy with your psyche like a weapon. His shot compositions, editing, sound cues, and the performances he draws from his cast are all on point. He’s a master craftsman behind the camera who wants nothing more than to rock your world. It’s almost a shame that someone this skilled devotes their time and energy to freaking you out. Aster is Bizarro Barry Jenkins. And Midsommar, with its bleak view on love, and relationships is the anti-If Beale Street Could Talk.

It’s impressive how Aster uses editing to keep you off balance. He stitches together large gaps in time to establish a woozy, dreamlike sensation before snapping you back to reality. It’s jarring. Aster makes you feel like you’re in the commune, losing track of time beneath the ever-present sunlight. At other times, his quick cuts keep you on edge as he creates a sense of menace in one scene that bleeds over into the next. Even as you’re transported to another time and place, and focused on another character, there’s no escaping that looming dread.

Aster may as well have crafted this horror masterclass with one arm tied behind his back. Long dark hallways, creaky floorboards, and cold, windy nights are long-time horror staples. Not here, though. Midsommar plays out in a location where the sun never sets. Aster fills the frame with blue skies, a verdant countryside, and golden-haired villagers. Not the scariest iconography.

Aster even threatens to kill the suspense by telegraphing major story beats. Grannys with Coke-bottle glasses will see this movie’s twists coming from miles away. Production designer Henrik Svensson’s not-so-subtly places plot details all around his eerie sets. One of Midsommar’s most unsettling aspects is how its filmmaker messes with you on his own terms.

Aster reunites with his Hereditary DP (Pawel Pogorzelski) to reform their tag-team of terror. Aster doesn’t rely on jump scares and sharp music cues to keep you on edge. He has off-the-charts visual storytelling abilities. He often builds tension by letting shots linger until they feel unnatural. His camera loves pushing in, ever so slightly, like a predator stalking its prey. Sometimes the camera perches up on the ceiling, and peers down at its subject like a spider. That smothering sense of something trapping you and closing in never lets up, even when the protagonists are out in the open beneath a sunny blue sky.

With its over-the-top violence and wild premise, Midsommar could come off like a schlocky grindhouse-style flick. But its secret weapon is Florence Pugh. She anchors this film in real human emotions, and you relate to her as a three-dimensional character, not some horror movie schmuck. 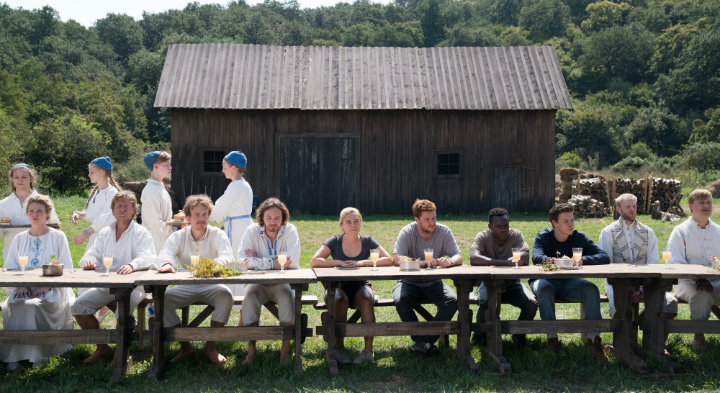 Pugh’s recent run of star-making performances is one of Hollywood’s best stories. She delivers A+ work in every role, and her work here is no exception. Pugh makes you feel Dani’s pain and connect with her anguish. Midsommar’s characters aren’t very deep, the plot meanders, and you could trim at least 20-minutes from the film. But Pugh delivers such a compelling performance that you forgive these flaws. So, even as Dani’s world descends into Itchy & Scratchy-levels of violence, we’re all in. By the time the story drags us down into the darkest trenches of the human soul, we’re too invested to jump ship.

Horror movies use confrontation to put us on edge. They immerse us in images, sounds, and themes that make us uncomfortable. The genre’s appeal is that these flicks can be big dumb fun (From Dusk till Dawn) or quite profound (Get Out). Sometimes they find a sweet spot between the two (The Thing). Though Aster elicits strong feelings from his audience like an old pro, Midsommar doesn’t check enough storytelling boxes to sink its hooks into you. Instead, the picture bullies a visceral reaction out of its viewers, and not much else.

Midsommar 100% delivers on the director’s intentions. It’s an anti-humanist revelry of violence born out of the filmmaker’s real-life breakup. When viewed as a masochistic act of catharsis, the film’s tone, themes, and violence make sense. Aster crafts a vengeful breakup story that will haunt your dreams. But it’s a tough watch that calls into question what you expect from a movie this stressful. Do you want to feel like you’re on pins and needles, or do you prefer to see them slowly driven through some poor soul’s flesh?

Horror movies horrify us; that’s a given. The great ones offer captivating windows into worlds I shudder to see. But at a taxing 140-minutes long, Midsommar comes off as vicious, joyless, and self-indulgent. It offers an in-your-face look at a world that I don’t need to see.